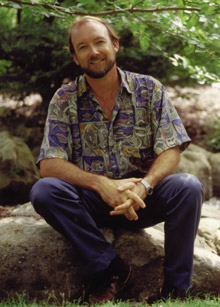 For a brief moment, with the sound of gunshots ringing out behind the huge limestone bluff, this could very well have been the jungles of Peru, with rebel soldiers giving chase to the American interlopers. All but one gun fired blanks. The other fired real ammunition to give the “bang” an authentic ring.

For an onlooker, the tempo and the location were difficult to grasp. With a sudden flurry of activity, it seemed like a three-ringed circus for just a moment, then it all stopped. First, they were down the dirt road out of sight, with only sounds of gunfire and fleeing rebels emanating from the trees.

Action was sandwiched in between a lot of waiting.

Just as a jigsaw puzzle is poured from the box and the various pieces tumble out unconnected, so the pieces of the movie set sat isolated and almost discordant.

Huddled around those props in various clusters were actors, production assistants, cameramen, producers, a few media types, and various onlookers. How were they all going to fit together? Rebel soldiers on a break by the trees over there. A small girl in the forest over here, as cameras zoomed in close for the shot. People hustling carts of gear down yonder.

Visitors didn’t always know where to look. Or what to do.

There was a lot of tippy-toeing around when we heard those words, the kind of maneuvers we deployed as teenagers while sneaking in past curfew. So we walked softly, hoping not to hear the director shout, “Cut!” in mid-scene. Most of us always wanted to be in the movies, but not that way.

In between scenes, we blotted out the sun with parts of the set — in this case, what appeared to be a piece of an ancient ruin, but was, in fact, painted Styrofoam. In the quarry lake, where water is reputed to be “pure enough to drink,” another segment of the set — more ruins — gave the illusion of floating columns jettisoned from a coliseum, also Styrofoam.

Perhaps only director Armand Mastroianni knows how this jigsaw will fit when the pieces come together next year.

“I don’t exactly know myself,” says James Redfield, the author/producer whose mind created all this — including the premise of the book.

Leaning against a cart in the shade during the hottest part of the day, Redfield cradled half a small bottle of water and munched on a high-protein nutritional bar as he was being queried about his experience in Ocala. Although he’s a novice at filmmaking, he seemed at ease and downright gleeful about his celluloid venture.

“In Hollywood, this set would have cost $5 million,” he said, gazing at the bluffs which framed the limestone quarry.

Equally as impressive for Redfield during his stay in Marion County were the people.

“Getting access to this land was certainly vital and the people we’ve dealt with here have been very nice,” he said of Ocalans. “They still do deals with a handshake, and they believe in keeping their word, which is something you don’t always see anymore.”

This location was discovered on a journey recently made by Redfield during a book tour. Further discussion and assistance from Jude Hagin of the Film Commission of Real Florida led to a deal.

What Redfield is counting on to propel his story is the sudden popularity of spiritual movies these days.

It’s no Passion of the Christ and nobody would dare to call it a religious film, but the plot of Celestine is action-oriented, with Americans chasing around South America after scrolls like they were on a scavenger hunt, all while being hunted by guerilla soldiers. The story is a parable, says its author, and the mythical scrolls contained an insight, which leads to enlightenment.

Don’t confuse them with the Dead Sea Scrolls, however. This isn’t a biblical epic.

What links them all together is synchronicity, the Carl Jung philosophical term for unrelated events that are, in fact, intersections of life that eventually come together in a common explanation.

You couldn’t blame Alabama-born and bred James Redfield for believing in Jung’s theory. After all, he didn’t become a writer until he was 20.

Later, he locked himself up in a Hoover, Alabama apartment for a year following a painful divorce, eschewing friends who came to his door. He went to work on a book to inspire troubled young people whom he was trying to counsel down a new path of life. At first it was sort of a textbook.

“It was so boring that I got bored just writing it,” said Redfield. “So I knew it would be boring to them.” Thus came the fictionalizing of the story.

Instead of changing the course of the youngsters, it drastically altered his path. First, he went on the road and soon gave away 1,500 copies of Celestine; next, he began selling them. Then Warner Books came along and made him a millionaire several times over. At last count, The Celestine Prophecy had sold more than 12 million copies.

It’s Redfield’s magic that has brought all these people together and sometimes his aura can be blinding to his minions.

“See this?” asked publicist Carol Green, pointing to the name “Milagros” on a hotel guest card left by the person who straightens her room every night. “‘Milagros’ translated means ‘miracle.’ When you’re around James Redfield, you get miracles.”

We shall see about the miracles to come, but without question Redfield’s creation can be classified as remarkable. And to this point in the shoot, things had gone magnificently smooth and he was most appreciative of his good fortune on his swing through Florida, which had started on the east coast in St. Augustine.

What President George W. Bush had been unable to do, Redfield easily accomplished. Flagler College turned down the president and his request for use of the buildings, but when Redfield approached the school, asking for use of the building as the setting for Elizondo’s parsonage, they made him an offer: Come back and do an author-in-residence curriculum for one semester.

Redfield accepted and plans to keep that promise.

Editor’s Note: Buddy Martin met James Redfield five years ago at a golf tournament in Colorado and is hoping for some synchronicity in his book-writing career, as well. Redfield is also a much better golfer than Martin.