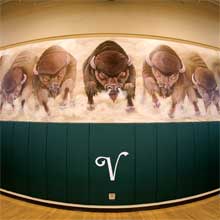 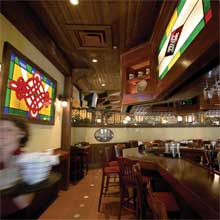 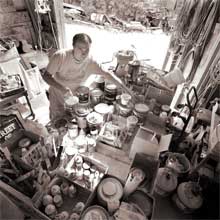 For someone who tries to specialize, Dennis Graves is definitely drawn in more than one direction. An artist who has called Marion County home for over 25 years, he makes a living in, as he puts it, “graphic arts applied to multimedia.”

Don’t expect this multi-talented man to restrict himself to just one medium, though. Dennis creates his art on glass, canvas, walls, floors, ceilings, and vehicles. He also does faux finishes and gold leafing, and recently completed the artist’s rendering for the ornate gates that will be built for Via Paradisus by ornamental Ocala metalsmith Jack Klahm.

Although known for his incredibly realistic equestrian work, Dennis is equally gifted at bringing wildlife and detailed landscapes to life. From horses and dogs to turn-of-the-century village scenes, Dennis thrives on the variety he finds in his work.

Originally from New England, Dennis has always had an affinity for water, inspired no doubt, by the small marina his family owned on the shore in Clinton, Connecticut.

“I’ve been a water person my whole life,” he recalls. “The first thing I ever painted was a boat.”

Dennis got his first taste of Florida on a family vacation to the Silver Springs attraction when he was just four. The sparkling clear waters and array of wildlife fascinated young Dennis, who for years would dream of the colorful fish he saw underwater there.

As a young man, he frequented Jupiter, Florida, enticed by the beach and the windsurfing opportunities. But when he had the opportunity to leave the northeast and move to Florida in 1979, his childhood memories of Silver Springs drew him back to the Ocala area.

“It made such an impact on me,” Dennis remembers. “That crystal water is just amazing.”

Today, he and his family — wife Laura, daughter Allura, and twin sons Aaron and Nathan — routinely take their pontoon boat out on local rivers for recreation.

Dennis began making a living with his art after moving to Ocala. For eight years he was a pictorial artist for a billboard company back in the days when the boards were all hand painted. Today, most billboards are covered by digitally printed wraps, which don’t require the artist to perch on a ledge for hours beside the highway.

Dennis painted “anything and everything.” Because he was hired to create a specific image, the designs weren’t from his own imagination. He painted many Weeki Wachee mermaids and his handiwork was also responsible for the local boards advertising the former Six Gun Territory theme park.

As an artist, the first equestrian-themed works he created for sale were large, etched-glass panels, which he displayed at the Fine Arts for Ocala shows in the late 1980s. These displays lead to numerous commissions by local farm and horse owners. The fact that he continued to paint signs opened additional doors and led to even more work.

And for the past ten years, The Villages has kept him very busy.

“I feel like they’ve taken me under their wing,” he remarks.

There, Dennis has painted the 10-foot by 280-foot, turn-of-the-century mural at the Savannah Center. He is also responsible for the exterior mural on the walls of the Rialto Theater, as well as murals in each of The Villages’ schools. He especially enjoyed creating the massive image of charging buffalo for The Villages Charter High School.

At Emmet’s Steak House, Dennis put a variety of skills to work. He painted an acrylic on canvas of the owner’s horse, complete with an Irish farm background, and then another of just the Irish countryside. He also completed etched glass work and designed five stained glass pieces that were then fabricated by Stained Glass Design in Mount Dora.

With his large-format paintings, Dennis sometimes paints the actual wall or he may paint a canvas at his studio and then apply it later using a wallpaper technique.

“I prefer to paint in the studio,” he notes, “as this takes many other variables, such as weather and travel, out of the equation.”

Numerous horse owners in the Ocala area have commissioned Dennis to immortalize a special horse. Dennis can approach this task in several different ways and typically paints the horse in acrylics on canvas or etches its likeness on glass or tile. In either case, he specializes in large format.

If the owner wants their horse immortalized in glass, Dennis finds he can do the most precise work by using the photo-etch method.

“This will look more like the horse in a photo,” he explains.

Photo etching utilizes a computer to create an image digitally, similar to a negative, which is then transferred to the glass as a photo resist, or mask. The glass is then cut by shooting an abrasive material under high air pressure. Dennis prefers this method over chemicals and does not use acid for etching.

“Acid is caustic and most pieces demand a finer etch,” he explains. “I have better control with shading, delicacy, and depth with the abrasive method.”

Dennis finds that using the hand-cut method will render more of an artistic interpretation of the horse, rather than an exact replica.


“Etched portraits on glass are the most challenging,” he adds. “Getting a likeness of breed is very achievable, but most people want it to look just like the exact horse, especially if it’s a tribute for a famous horse or one that has passed away.”

When creating etched glass murals, there are three basic methods and with most of these, Dennis does his work on the reverse side of the glass. When etching glass, he uses a respirator with a hood, long protective gloves, and clothing worn only for this work.

Despite the great variety in his work, when pressed, Dennis says that his favorites are the large, painted murals and the etched-glass pieces that have special meaning, such as a commissioned horse portrait.

Dennis Graves is the first to confess that he’s been blessed to have a career that allows him to turn loose his creativity.

“If someone describes something to me, I immediately get an image in my mind.”

Just don’t ask him to do a human portrait.

“They tend to be cartoonish,” he admits with a chuckle. “But when I get to do exactly what I want, I find some of my work has a surreal quality.”