Evelyn Starta has an ageless beauty. Though she has been retired many years, her face has few lines and most often is simply adorned with a smile. Maybe she has an inner peace. Or maybe it’s because she has been a belly dancer for many years.

As a full-time secretary and active suburban mother in her thirties, Evelyn decided she needed to do something for herself. She wanted to try dancing and discovered the only class offered at that time was belly dancing. 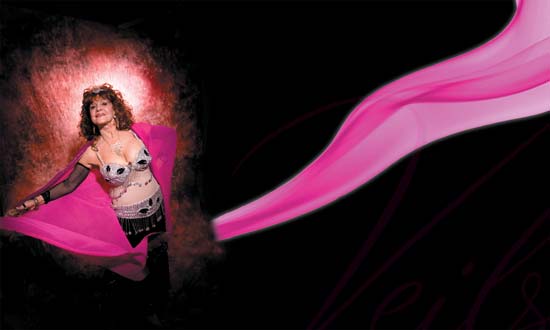 “I wanted to dance. I was working full-time and raising three children,” says Evelyn. “I felt I had to get out and do something on my own. So I decided to try it.”

Her pastime eventually led to a job as a professional dancer with a dance troupe for five years. When she retired and moved to The Villages, she assumed her dancing days were over. Her friends had other ideas.

“When some people heard I knew belly dancing, they begged me to start a class. I put the program together and it has gone well,” says Evelyn. “I love being with the girls, and the dancing is good for your brain, as well as your body.”

The classes began 12 years ago, and some ladies who started in those original classes with Evelyn haven’t stopped.

“We did it at La Hacienda Center,” says Ann Roddie. “I have a notebook with pictures from back then. It’s so nice, with the arm movements and the swaying. It’s exotic, like you’re in another world.”

“It’s an exotic way to get a complete aerobic workout,” agrees Natalie Mosby.

The costumes are colorful and sheer, covered with sequins and adorned with the coin belts around the stomach and hips. The belts create the cheerful tinkling noises with every movement the dancer makes.

Belly dancing is a blend of Middle Eastern and Oriental dancing. It has evolved today into a dance with influences from many countries. Like most folk dances, steps were changed as they were adapted by towns and villages that added their own touches to it. Belly dancing requires good muscle control in the abdominal and hip area, with skillful, refined movements.

“Belly dancing was started in the palaces. The wives of the sheiks would dance to show him who would be the best to bear his children,” Evelyn says. “From that, they began dancing at parties, weddings, and celebrations.”

Belly dancing was introduced to America at the World’s Fair in 1893 in Chicago, where many of the exhibits focused on Middle Eastern culture. Thomas Edison was so enamored by the dancing that he included some of the dancers in his earliest films. Later, Holly-wood’s influence created the more sensual, sexy elements seen in the early movies.

“The music is so soothing, you can make any moves you want with it. I have the ladies do a lot of freestyle, just move with the music like they want to,” Evelyn says. “They love playing the zills and working with the veils. It really does exercise the brain. You have to keep your feet moving, remember the dance steps, move your veil, use your finger cymbals, and move your body.” 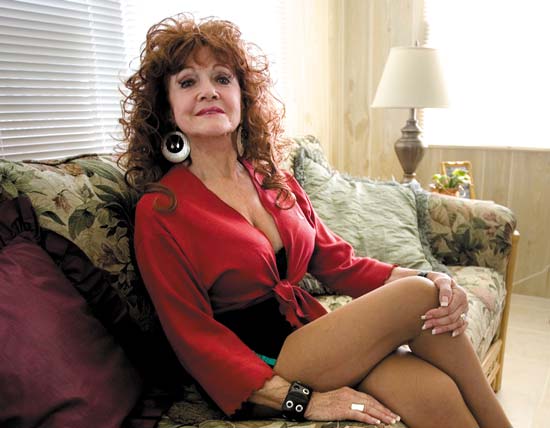 Belly dancing is glamorous. It takes you out of the realm of the everyday world and makes you feel alive.”

Sharon Passiatore, who has been dancing with the ladies for three years, says, “I love the movements, and I love the way it keeps my mid-riff toned.”

Evelyn’s classes are part of the curriculum at The Villages Lifelong Learning College. Her style of belly dancing is Cabaret/Oriental, and it actually gives students a good aerobic workout. With the constant movement of the body and the motion of the arms and legs, it’s a well-rounded hour. The classes are designed for beginners and advanced students. Students must take the beginners’ class to qualify for the ad-vanced class. Class fee varies according to whether residence is outside or inside The Villages.

“When the snowbirds are in town, I have as many as 50 people in my classes, which gives me quite a challenge,” Evelyn says. “The kind of dancing I teach is what you would see in a nightclub. Whenever I’m dancing, I feel like I’m on a mini-vacation.”

Evelyn says some elements of the dance include dancing with a snake or a sword, but she has never used those props. When her belly dancing group marches in the local parade, they are accompanied by their own harem guard walking behind them, armed with a sword and dressed in medieval Middle Eastern gear.

“He’s been with us for years, and he really enjoys it,” Evelyn says.

In observing the belly dancing classes, it was obvious the advanced group was more relaxed and comfortable with the movements and rhythm of the dance. Holding their arms gracefully above their heads, the dancers are trained to move their abdomens in a slow, controlled un-dulation that gives the sensual dance its name. There’s no doubt the dance’s original intent was to please a man, including the delicate move-ments of the sheer veils that give the illusion of women who have tantalizing secrets.

“We’re all having so much fun. It’s just great. We love to perform for clubs and parties,” Evelyn says. “Belly dancing is glamorous. It takes you out of the realm of the everyday world and makes you feel alive.”