The owner of DeLuca Toyota offers superior service and treats customers and employees like family.

Frank DeLuca remembers how different Ocala was 30 years ago. For one, the young car dealer—newly arrived from Orlando in 1978—couldn’t find a single competitor along State Road 200, the town’s main thoroughfare now called “Auto Row.”

“I was the only one out here,” he recalls. “There was no mall, very few restaurants, and no car dealerships.”

Though such an untapped market seems ideal for a budding business, opening a Toyota dealership in the late-1970s had its fair share of risks. GM and Ford were the auto industry giants at the time, while Toyota cars, sold in the U.S. for less than a decade by then, were largely unheard of among the buying public. Frank found that most people couldn’t even pronounce the company’s name. 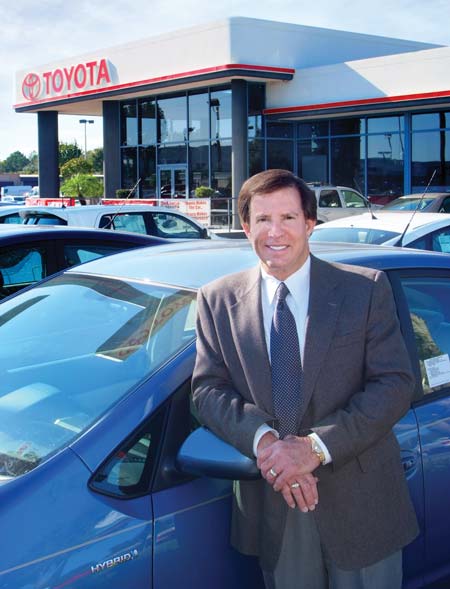 “Back then, Volkswagen was the big import. Toyota was an unknown product,” he says. “When we first started, we sold 25 to 30 new cars a month, with about 20 employees.”

Like the city around it, however, Frank’s dealership grew steadily over the years. As consumers learned about the solidly designed and engineered Toyota, local customers increasingly sought out DeLuca Toyota for its commitment to service. Today, the majority of Frank’s business comes from the tri-county area of Lake, Marion, and Alachua, and his team of 122 employees sells well over 300 cars a month.

“Seventy-nine percent of our customers are repeat customers. Whether someone will buy a second, third, 10th, or even 15th car from a dealership depends on the kind of service they get,” Frank says. “It’s not just giving a customer that good feeling when they’re buying their car, but giving them good service over and over again. DeLuca Toyota focuses on improving its performance by serving the needs of our customers.”

Recently, Frank was reminded of the importance of service when a long-time customer stopped by to show him her Toyota truck, purchased new from the dealership in 1986 and still going strong with 412,000 miles on it. Frank says it’s not uncommon for his service experts to work on DeLuca Toyotas with over a quarter of a million miles on them.

Toyota’s longevity is a point of pride for Frank, who drives a Sequoia himself. He attributes the vehicle’s soundness to the company’s unparalleled commitment to its product lines. Globally, Toyota spends $1 million a day on research and development.

“Toyota builds the car the consumer wants, while the domestics build the car they want to sell,” Frank explains. “Toyota has the reliability and the quality. It’s a superior product.”

A large part of the DeLuca difference is the company’s culture of taking care of its own. Some employees have been with Frank for over 25 years.

“There is a lot of longevity here because we take care of the people who work at DeLuca just like we take care of our customers,” Frank says. “Our goal is to ensure our dealership has a strong foundation of people and culture that builds customers for life. Doing so will ensure our success.” 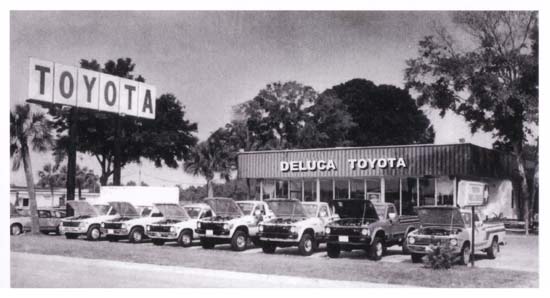 Frank is also an avid community supporter. He currently serves on the boards of the President’s Community Council at Central Florida Community College and the Marion County Economic Development Council. Three years ago, he established the Carole DeLuca Memorial Scholarship at CFCC in memory of his late wife of 39 years. He also built a media center at Trinity Catholic High School in her name.

“She was very involved in the community and did a lot of charity work herself,” he says. “I do this to keep that going, to give back to the community for all the things the community has given me.”

Frank has come a long way from his initial foray into the auto industry as an 18-year-old college student detailing cars on the weekends. But even after several Toyota President’s Awards and J.D. Power and Associates Retailer of the Year honors, Frank says his business philosophy remains a simple one.

“A long time ago, a friend in the automobile industry reminded me that I was really in the customer service business. He was right. The customer is the most important thing to any business. Here, we treat every customer like an honored guest in our home.”