Yes, I paraphrased Sally Field’s spontaneous, funny comment from 1985 upon winning the Best Actress Oscar for Places In The Heart. I just can’t help but think of her genuinely humble response to being honored by her peers in such a big way whenever Ocala Style takes home some impressive hardware of its own. I guess that’s because I feel like we work really hard every day to produce an exceptional, first-class magazine that the whole community can enjoy without considering the glittery prizes at the end given by our esteemed colleagues in the industry. 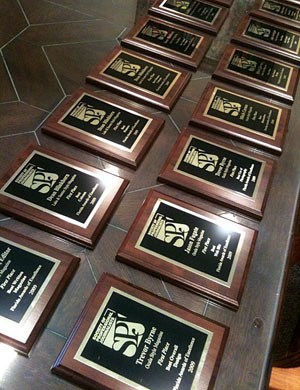 Honestly, I’m more concerned with what you think.

But I gotta say, I was stunned at the results of the past year’s efforts by our whole team—our incredibly talented staff editors, graphic designers, photographers, and contributing writers that take these crazy ideas rambling around in my head and turn them into something that Ocala so clearly enjoys.

The recent round of the North Central Florida Chapter of the Society of Professional Journalism awards brought some of our biggest accolades in our 10-year history—Best Written Magazine, Best Overall Design, Best Overall Use Of Photography, and even Best Column for the page you’re reading now. I’m amazed that I get to work with such creative, talented people every single day. Yes, we all work very hard—like most local companies, even harder these past 18 months—to make these more than just words on a page.

And that leads me to the next humbling acknowledgement, something we’ve been teasing on our covers for the past few months but that I feel needs a little explanation here—Ocala Style as the “most-read publication in Marion County.”

I know what you’re thinking, Yeah, right. I was skeptical, too, especially since we see, hear, and read similar claims by hundreds of other products every day. But a closer look at the data provided by The Media Audit, a nationwide independent rating company, made a believer out of me.

Using a sophisticated and detailed matrix of open-ended questions, the most recent survey showed (hey, that sounded like Richard Dawson on Family Feud!) that the magazine has a readership of over 147,000. That means roughly half of Marion County’s total population frequently reads Ocala Style.

What was most surprising, however,was how dominant the ratings were across all categories—income, gender, race, age, and educational background, to name just a few. Just for fun, I’d pick an obscure category like “Art Patrons Who Have A Dog And Drive A Volkswagen” only to see we’d still be on top.

I have a theory about this.

Ocala Style has grown as Ocala’s grown, but in that time we’ve never lost sight of all the differences that make Marion County such a special place to live and work. Great people are doing great things no matter how much they earn, no matter what their color, and no matter what they drive. Yes, Ocala does indeed have style and we’ve been doing our best to show you that for more than a decade. Of course, you—and the SPJ judges—have lauded the magazine you hold in your hands in a big way this past year. And even though I can’t thank them since they’re anonymous, I can thank you.

I don’t think I’d have it any other way.

The Ocala Style Top 10 with Dean Blinkhorn, the first Friday of each month at 8am on BIG 92.9 with Bill Barr.
Upcoming shows: May 7 and June 4.