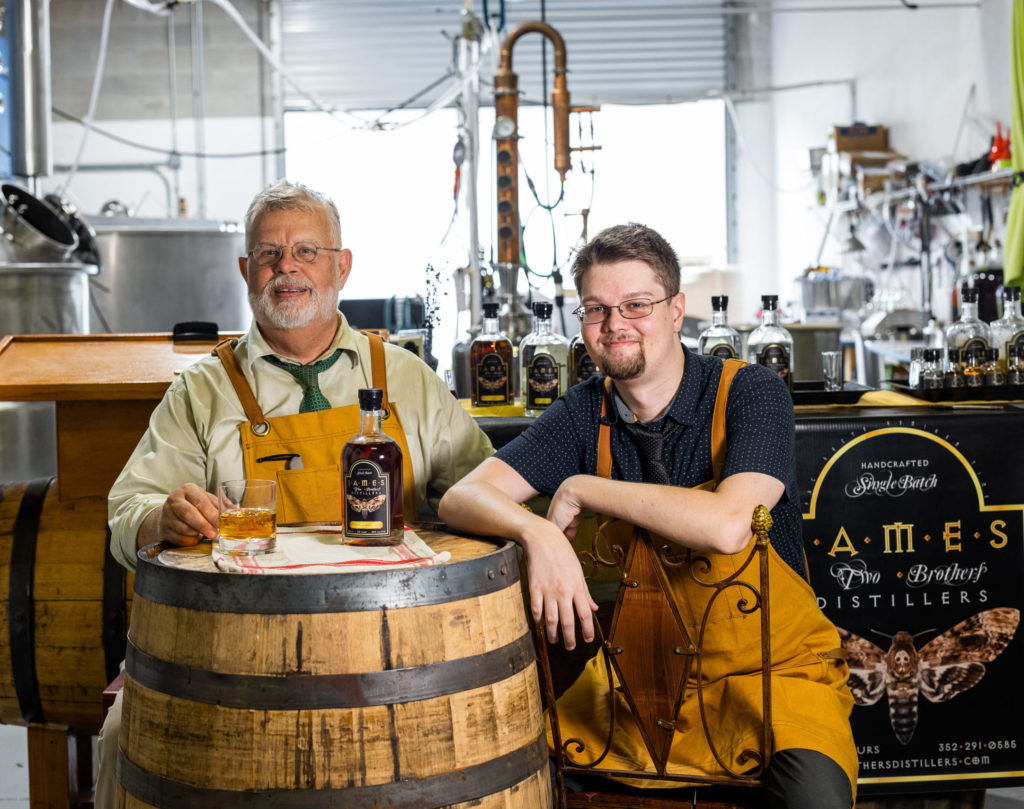 With a storied history and a passion for handcrafted liquors, this enterprising family team is upholding a proud tradition and keeping an eye on the future.

The road to being a distillery owner is often the road less traveled. It never occurred to Paul James, the owner of James Two Brothers Distillers, to announce to his fifth-grade classmates on Career Day that he wanted to become a distillery owner. But that he did become. After he became an architect.

James Two Brothers Distillers in southwest Ocala, also known as J2B, was the brainchild of Paul and his brother Timothy “Tim” James. Their co-owned business was conceived in Lakeland, Florida, on June 18th, 2012. The plans and dreams were discussed and solidified. The official birth was July 10th, 2017, when the licenses were obtained.

Originally from Kansas, Paul attended Wichita State University and studied there for two years. He then moved to Bradenton and commuted to Clearwater Technical Institute. He did work in architecture and design, “but it was not a direct route,” Paul explains, “because I never licensed. Without a license, you always have to work for someone else.” 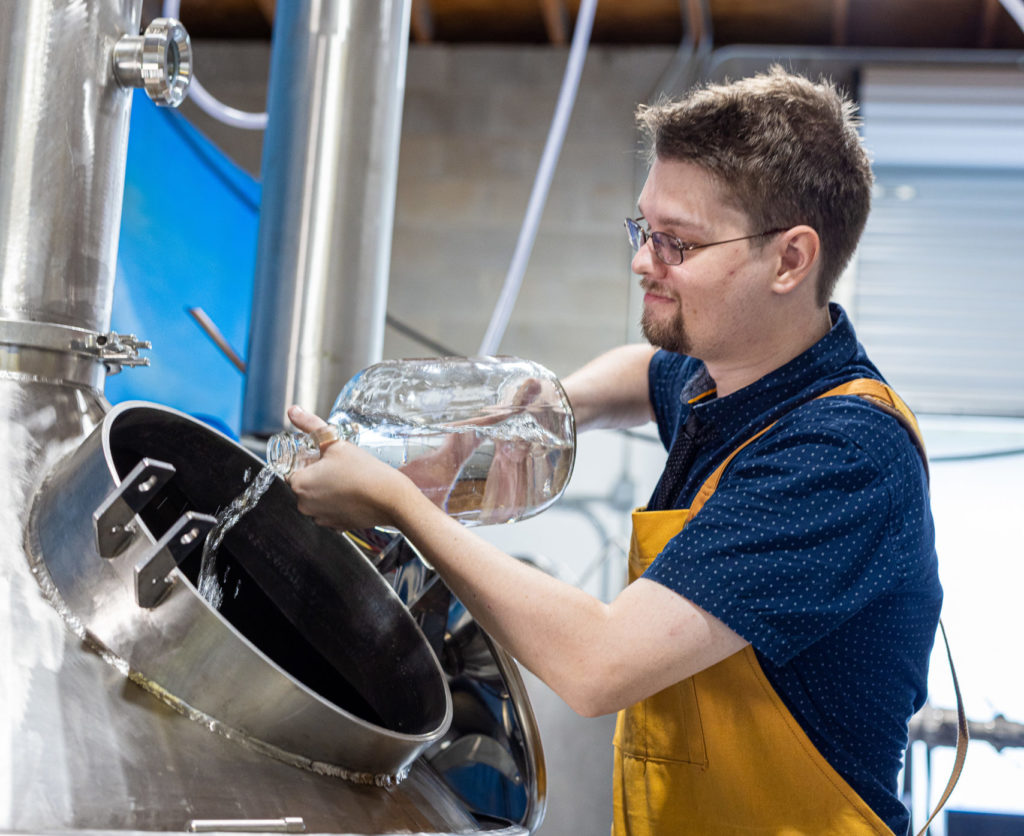 “I worked in architecture and design for 40 years,” Paul adds. “In 2007, the architecture industry as a whole took a dive. The first housing bubble really affected everything, not just housing but the whole construction industry. And at that time, I was reaching the age where I thought I should be able to retire early after working diligently in the industry. So, it came as a bit of a blow.”

However, it was his experiences in that field, which included designing facilities for brewers and distillers, including Bacardi, that pointed him in the direction of his next chapter. “I thought that would be something I’d like to do when I retire,” he recalls.

Before retiring from architecture, Paul spent time in Boca Raton and Lakeland, and then came to Ocala in 2014. Tim was a seminary student at Asbury College, a Christian liberal arts school in central Kentucky. He graduated in 1982 with a master’s degree in theology.

“The way he chose to make a living ultimately was counseling and in psychology,” Paul notes.

Although Tim was Paul’s business partner, “he never really took a keen interest in the business aspect of J2B. And he never had the required passion for any segment of the business which was profit-driven. But this did not diminish Timothy’s love of the distilling craft,” Paul offers.

Sadly, Tim passed away in May of 2018, from complications due to COPD.

During the planning and setting up of J2B, Paul’s son Taylor, who was just entering the workforce, took a deep interest in the distillery.

“It seemed that the craft was in our blood,” Paul observes.

And, indeed it was. The James family was originally from England and there were distillers among their ancestors.

Christoph de Graffenried, a businessman from Switzerland, connected with the Jameses in the early 1700s in order to charter ships out of England to the colonies.

In the summer of 1711, after coming to America, de Graffenried, with his family’s fortune, took a trip up the Neuse River in North Carolina, with plans of starting a vineyard and winery. His method was to crossbreed European grapes with wild, native grapes. But the indigenous tribes put a stop to it by killing his guide. The venture failed and a broke de Graffenreid returned to Switzerland.

But the Jameses and some of the de Graffenreid family stayed, going into farming and distilling. Although there were ongoing working relationships between the families, no marriages were celebrated for more than a hundred years. Mary Francis de Graffenreid married William F. James in 1853 and together they produced seven children.

Family research indicates that numerous subsequent generations were also distillers who settled in the south central regions of Kentucky up to the Civil War era. Paul’s grandfather and great-grandfather were also involved in winemaking for a period of time.

After his brother’s passing, the business became more of a father and son team.

“Taylor began stepping in more,” Paul notes. They worked together on everything from selecting grains and cane to bottling, licensing, accounting, marketing and examining potential new opportunities.

And, Paul adds, J2B has received “tremendous support” from his wife Stella. “She helps run the business.”

But for Taylor, it is more than just an interest.

“You need to want to do it,” Taylor asserts. “You do it because you love it.”

Taylor solidified his professional path after a brief stint at Polk State College.

“I quickly found it wasn’t for me,” admits Taylor. “I was going to go into an artistic kind of thing,” he recalls. “But, obviously, that wasn’t going to pay any bills.”

He started spending more time at the distillery, while thinking about his future. It would eventually become his calling.

“You have to wear a lot of hats here,” Taylor explains, “but I guess you could say I’m the brewmaster, the master distiller.”

When Paul eventually retires, Taylor will take over the entire operation at J2B.

However, even if Paul does choose to step away, there’s a strong feeling he will keep his foot in the door as an advisor and consultant.

“If he wants me around!” Paul jokes. “I’ll just wander around and bother people!”

“If you ask me, I don’t think he’s ever going to want to quit,” Taylor responds. “He tried to retire before and he gets a little stir crazy.” 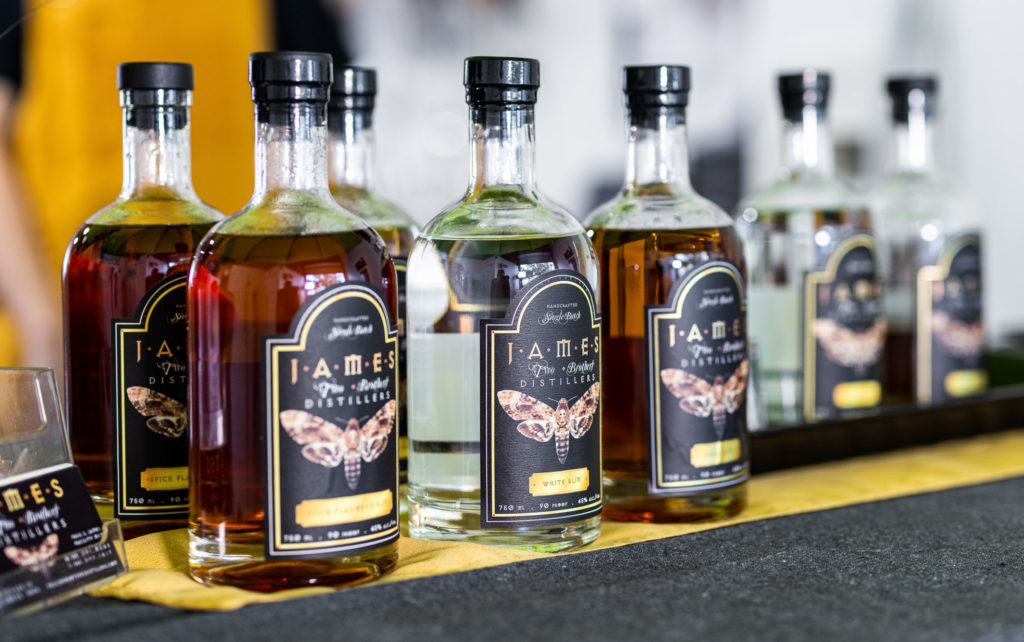 “When I first got into this, I was barely of the age to be drinking at all and had no experience,” Taylor admits. “I actually had to go around and sample the mainstream stuff and compare it to ours to actually know the difference.”

He made it his mission to educate himself about craft liquors similar to what J2B produces and study them in comparison to the mass-produced brands.

“I had to acquire that taste in order to distinguish the differences between them. Now I wouldn’t be able to drink the mainstream stuff.”

“We have a bourbon, a smoked rye and a single malt,” Taylor states.

The single malt is a scotch, but legally cannot be called that. To be labeled scotch, it would have to be distilled in Scotland.

The two are also proud to say that J2B starts with higher quality ingredients than other brands.

“Even without any aging or before flavoring, our brands are top-shelf from the start,” Taylor declares.

And Paul stipulates (with tongue-in-cheek) that “C2H6O, the molecular structure of alcohol, which is two parts carbon, six parts hydrogen, and one part oxygen, is the therapeutic potion for all!”

In fact, during the early days of the COVID-19 pandemic, J2B shifted their focus to provide supplies of an essential product that did more than soothe the soul.

Like other distillers across the country, J2B was called upon to create and supply desperately needed hand sanitizer to many, including local first responders. Since high grade alcohol is an essential component of sanitizers and with supplies disappearing due to an overwhelming demand, Paul and Taylor set out to help. It didn’t take long for them to exhaust every drop of their reserves, which had been aging to use for their spirits production.

“We did it because we depend on our community, and we believe they should be able to depend on us.” Taylor stated at the time. “Then the economy began to falter, and our reserves were gone, so we saw no choice for us but to run our equipment 24/7 to produce more alcohol.”

Both men felt it was their duty.

Now that sanitizer supplies have returned to normal, they have been able to shift their focus back to creating the products they love and taking their growing family business into the future.

They offer tours the second Saturday of every month to educate visitors about their craft and their company, where you can witness firsthand how their family ties, as well as two parts carbon, six parts hydrogen and one part oxygen, run deep.

J2B products can be enjoyed at several local venues and are offered for purchase on site at the distillery.