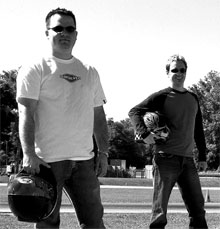 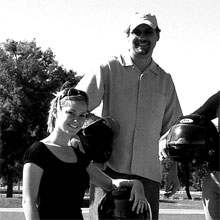 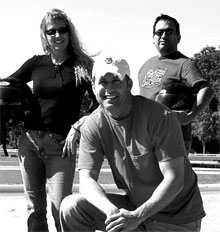 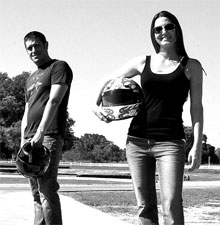 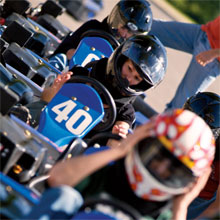 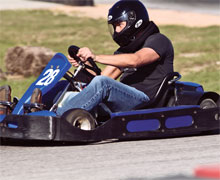 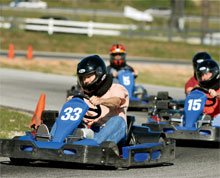 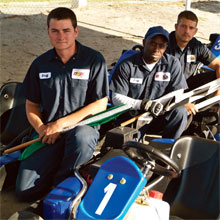 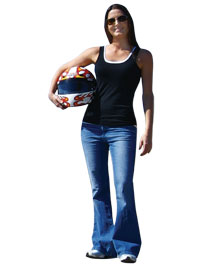 What do you get when you cross a nine-horsepower Honda motor with a tough steel frame, four smokin’ tires, and nearly a mile of blacktop? In a word, the kind of adrenaline rush only speed can provide.

We’re sitting in line idling, waiting to hit the track. Minutes later, I’m flying down a strip of asphalt, wind whipping my shirt. My helmet muffles some, but not all of the noise. Sunlight glints off my visor as I lean into the turn.

I’m cruising along at the same speed I would drive my truck down East Silver Springs Boulevard, but believe me, this feels a whole lot faster. I’m so close to the ground, I could put my hand out and touch it. Bad idea. I think I’ll just keep both hands on the steering wheel and focus on the curving track ahead.

Okay, I admit my ultimate preference for “horsepower” includes four legs, a mane, and a tail. Less noise, different smells. Still, I didn’t hesitate when invited to experience the go kart adventure at Ocala Gran Prix with the crew from Ocala Style magazine and then tell the story.

“We’ve wanted to do this for over a year,” says Editor-In-Chief Dean Blinkhorn. “We knew if we got the whole staff together we would have a really good time, but I didn’t know my co-workers were this competitive. Until we hit the track, I had no idea how serious everyone would take it.”

Hey, how often do you get a chance to beat the boss fair and square?

So on a designated afternoon, the group of us rendezvoused at Ocala Gran Prix, an open-wheel kart racing facility adjacent to the flea market at 1-75 between U.S. 27 and County Road 326.

The venue features Sodikarts, manufactured in the U.K. and shipped to the U.S. where they are popular with concessions. More rugged than your standard racing kart, they’re built with safety in mind and hold up to the demands of the driving public in a rental scenario.

“They’re designed so you can’t touch anything hot,” explains Troy Mitchell, IT director of Ocala Gran Prix, “and the rubber surrounding the kart prevents any wheel-to-wheel contact.”

There is no “average” customer at Ocala Gran Prix. Drivers range from age 12 all the way up to folks in their seventies who crave the rush of driving a kart at racing speeds.

For safety reasons, only 10 drivers can race at a time during private events and only eight karts are allowed on the course during regular public driving. When the Ocala Style crew hit the track, we ended up having several different races of either ten or 15 laps each. Just like in the big leagues, the drivers bunch together and approach the line for a rolling start. As soon as the green flag drops, the race is on.

And at that moment, all professional courtesies are off. It no longer matters if that’s your boss in the kart you just cut off in the turn, or your trusty co-worker that you blew past on the straightaway.

“There’s nothing quite like the feeling of smoking your boss,” says graphic artist Mitch Carnes, after winning one race and beating his immediate supervisor, Creative Director Trevor Byrne.

“Once you learn to lean your weight into the turns, the tires really grab the road,” adds Dean. “You have to wipe out at least once to learn what the kart can tolerate and how to compensate. If you’re not wiping out, you’re not going fast enough.”

When it came time for the actual racing to begin, I didn’t feel the need for speed as much as my cohorts. For the story’s sake, I opted to step out of the driver’s seat and take notes as I watched the action from the timing shed next to the track where a computer showed the lap speeds of each driver.

Mitchell explained that, just like NASCAR, there’s an AMB transponder on each cart that enables a sensor in the track to pick up and record the speed. In the timing shed, those lap speeds immediately pop up on a computer screen, making it easy to see how different drivers are handling the track — and the competition. Outside, a digital signboard posts these lap results and reveals the ultimate winner.

“You’re traveling at such high speeds and you know the kart is going to grip the corners,” observes Graphic Designer J. Fugate, who won one of the races. “It was exhilarating.”

Afterwards, Steve Codraro, creative director for Lake & Sumter Style admits, “I talked about it all weekend and I’m planning on going again. To be that close to the ground and go that fast was amazing. Forty-five miles per hour in a car isn’t that fast, but when your butt is about an inch from the ground, it’s really fast! I’m all stoked to go again!”

Cindy Brown, production manager for STYLE magazines was the only woman who decided to pit her talents against the guys when it came time to race. Kellie Moore, office manager, participated in the warm-up laps but confesses, “When I saw what fierce competitors I work with, I decided that rather than race them, I would cheer them on from the sidelines.”

Cindy gave the men a serious run for their money and revealed her NASCAR savvy when it came to handling the track. She also knew better than most what the various flags and signals meant. But don’t think for a minute that the guys went easy on her just because she’s one of the “fairer” sex.

I overheard one of the Ocala Gran Prix staff members whisper to another, “That girl really knows what she’s doing.”

I left the track that evening with a newfound respect for professional drivers who make their living piloting a fast car around a big oval. It’s more of a physical workout than I expected it would be.

As for my speed diversion of choice, I’m always going to opt for the horsepower that’s fueled by hay, not gasoline. But I can definitely appreciate the appeal of releasing your inner daredevil and putting the pedal to the metal. There’s something about speed that blows all the cobwebs out of your brain.

STYLE Magazines Production Manager Cindy Brown is a NASCAR fan and proud of it. Raised by a father who raced dragsters, Cindy grew up going to the Gatornationals in Gainesville and being surrounded by powerful, noisy racing machines. When the STYLE go kart racing adventure was announced, there was no doubt that Cindy would be in the thick of it.

“My co-workers tend to make fun of me for watching NASCAR,” she notes, “so I found it quite amusing when they had no idea what the flags meant.”

Not to worry. Cindy gave the guys a rundown on flags and signals, and then proceeded to get down to business on the track. Her performance that afternoon shouldn’t be surprising since she’d raced the track before in a high-powered kart.

“I enjoy speed and going fast doesn’t intimidate me,” she grins. “When you’re the only female in a testosterone-driven race, keep your pedal to the floor, a straight line on the track, and never look back!”

Cindy’s father, Rick, and her husband, Larry, are now trying to convince her to get into the women’s go kart racing circuit.

But they shouldn’t hold their breath. As Cindy told them, “I’d rather race the guys!”

Reservations aren’t necessary; you can just “arrive and drive” during regular hours Wednesday through Sunday, unless the track is closed for a private event. The minimum rental time is 30 minutes.