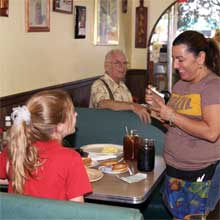 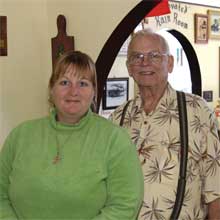 On an early spring day in Banner Elk, North Carolina, Richard Lee made his first snowball. Until March 26, Miami-born and -raised Richard had never seen snow, and he reveled in the experience. He’d even made a list of everything he wanted to do once he finally saw snow, and over the course of three memorable days, he crossed everything off that list with the exception of making a snow angel. When it came right down to it, he decided he didn’t need to get wet and covered with snow to know that he was living in the moment.

And loving every second.

For 68-year-old Richard, who undertook the adventure with wife Fran and grandson Brandon, the trip to snow country was, in his words, “a blessing.”

Knowing Richard had long dreamed of seeing snow, the customers (he prefers to call them friends) at his Richard’s Place decided this dream needed to become reality.

“Many people kicked in $10 and $15 until they paid for the whole trip,” says Richard. “I didn’t find out about it until just before we left.”

Passionate about his work, Richard has devoted 12 to 14 hours a day, seven days a week, to the corner restaurant in downtown Ocala. Down-home country cooking and a loyal clientele have since made the breakfast/lunch spot an Ocala icon for the past 23 years.

“Some people might think it’s boring because I do the same thing almost every day,” admits Richard, “but I love my work and I enjoy the friendships I have with my customers. We’re like a close-knit family; I can tell you something about all of them.”

But in February, Richard Lee got a wake-up call. When a lengthy battle with a stubborn bout of flu landed him in the hospital, Richard’s doctor ordered a complete CAT scan. The findings were sobering and completely unexpected: pancreatic cancer.

“I’d only been in the hospital when I had my bypass eight years ago, but the good Lord meant for me to go this time,” says Richard with conviction. “We found this before it was advanced. I’m going through chemo now and my doctors are saying that my prognosis is even better than originally predicted.”

Once-a-week chemotherapy treatments have changed Richard’s daunting schedule at the restaurant. His oncologist, Dr. Cartwright of Ocala Oncology, put him on a type of chemo treatment that has minimal side effects.

“I’m not as hungry as I was before, but my appetite is picking up,” says Richard, who has dropped almost 30 pounds.

Tall and dignified, with a shock of thinning white hair, Richard’s robust frame has indeed lost some of its bulk over recent months. Bright eyes sparkling behind his glasses, he chuckles and tells a patron who compliments him on his weight loss that he doesn’t exactly recommend the “diet.”

At the present time, radiation is not scheduled and Dr. Cartwright has “high expectations” after reviewing Richard’s most recent blood work. Richard is even optimistic that his chemotherapy sessions may end sooner than expected.

Clearly, Richard doesn’t plan on being a statistic; he wants to be a survivor.

Ask anyone who has faced cancer and they’ll say it’s impossible to look at life the same way after the diagnosis. With the sudden awareness of mortality there often comes clarity, even peace.

“I’ve always been a strong believer in God and His powers, but my awareness of this has intensified,” Richard observes. “I have a lot of prayers behind me,” says the man whose prayed for many in his family of customers over the years.

For Richard, accepting the fact that he actually needs time for “relaxation and a little fun” was a revelation.

“I enjoy my work so much that it’s going to be ‘work’ for me to take a day off,” he says. “I don’t plan on retiring any time soon, but I do plan to take a little more time off.”

Fran and daughter Diane stepped in and helped run the restaurant after Richard was unable to maintain his previous seven-days-a-week schedule. Longtime employees Sal Rannazzi, Tiny Collins, Sharon Wolff, and Dee Dee Goodman have been invaluable, as was the rest of the Richard’s staff. Even Richard’s 15-year-old granddaughter, April, helps on weekends.

With all he has faced over the past few months, Richard’s appreciation for his everyday routine has only increased.

Looking forward to the time when chemo treatments will no longer be part of his weekly schedule, Richard draws strength from his marriage of 41 years.

“We’re happy,” he says simply, and the sincerity in his smile backs up his words. “Fran’s a strong woman, both mentally and physically. We’ve had a very good marriage all these years.”

The couple met in 1964 while showing horses in Florida, and after just six weeks, Richard asked Fran to marry him. He drove up to Georgia to formally ask for her hand. (“She was already almost packed when I arrived to meet her parents,” he recalls.) Richard took his new bride back to Miami where they started Gatewood Arabians and began training horses.

After moving the farm to Ocala, they continued to maintain a string of show horses, which Fran takes on the road regularly; Fran and Diane also train youth riders. The farm is home to several retired show horses, including a 32-year-old double national champion, The Chairman. Always soft towards unwanted animals, the Lees have rescued many horses, dogs and cats over the years. The small animal “herd” currently includes one cat and three dogs.

“We call them ‘trot-ons,’” Richard laughs. “They trot onto the farm and they stay!”

Despite nearly seven decades of living, Richard displays an almost child-like enthusiasm, yet he is well aware of the sobering fact that time is limited. To that end, with the ardent support of his family, his friends, and his faith, Richard is determined to make the most of each day.

On this sunny March morning, Richard is busy manning the register at his restaurant and checking on customers. A patron stops by to offer a hug and to comment on the North Carolina photos Richard brought in.

“The next time I go, I want to go in the summer and go whitewater rafting,” he confides. “I plan on being here a long time.”

Richard Lee’s busiest days are weekends, when an average of 400 to 500 patrons per day crowd into his casual downtown Ocala diner for breakfast and lunch. Known for its all-day breakfast, Tennessee ham, and homemade biscuits and gravy, Richard’s Place features simple country fare all made from scratch. “We don’t buy pre-prepared anything,” Richard says.