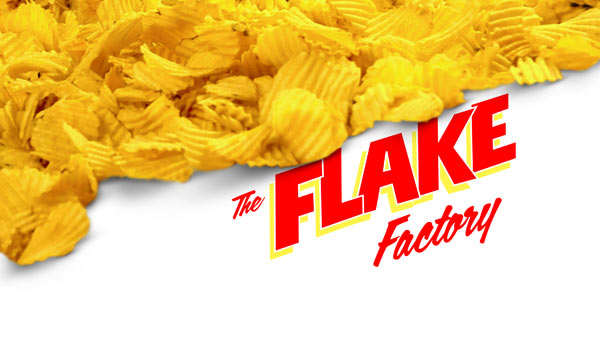 Ah, the humble, versatile potato chip—the staple of game days, birthday parties and backyard cookouts. It ranks as one of America’s all-time favorite snacks, but did you know that the potato chip was actually an accidental creation?

According to the Snack Food Association, on August 24, 1853, a wealthy gentleman (other reports say it was Commodore Cornelius Vanderbilt)dining at an upscale resort known as Moon’s Lake House in Saratoga, New York, sent his meal back to the kitchen after he deemed the fried potatoes too soggy and not thin enough for his liking. After the guest complained again and sent back the second dish of “replacement” potatoes, chef George Crum decided to remedy the situation by slicing the potatoes so thin that when fried they’d be too crisp to even eat with a fork. Imagine his surprise when the complaining patron raved about the resulting “crunch potato slices.”

Other diners began asking for the unusual side dish, and the restaurant wisely added them to the menu, calling them “Saratoga Chips.” The salty snack was soon packaged and sold in town, then eventually throughout New England.

Since that inauspicious beginning, the potato chip’s popularity has spread around the globe. In fact, according to the SFA, Americans spend more than $6 billion on potato chips every year. 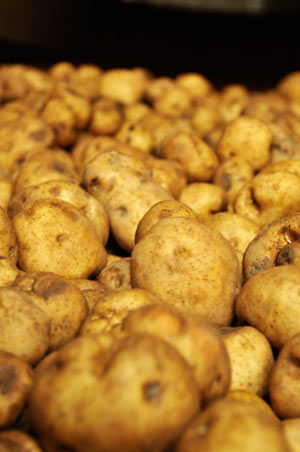 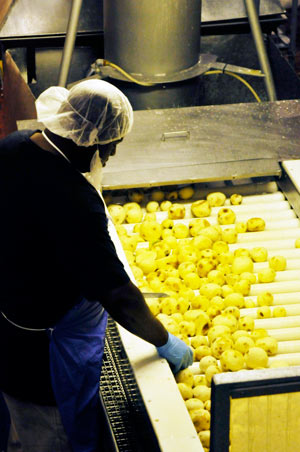 In 1923, Magic City Food Company was launched in Birmingham, Alabama, and later became Golden Flake Snack Foods. Birmingham remains the company headquarters, but its Ocala plant has been operating since 1984 and celebrated its 25th anniversary last year. The plant offers tours to visitors (by appointment only) and is a popular choice for school field trips.

Every week, 10 to 20 semi loads of potatoes arrive at the Golden Flake plant, each weighing somewhere between 25,000 to 50,000 pounds. The potatoes come from various parts of the country, depending on the time of year. While people typically think “Idaho” when it comes to potatoes, the Gem State is actually known for baking potatoes, which are not ideal for making chips. A “select” potato with a lower moisture content is best.

“Right now we’re getting them from Wisconsin and North Carolina,” says Jon Wagner, who’s been Golden Flake’s Ocala plant manager for nine years. “Come May, depending on how the crop comes in, we’ll hopefully be getting them from Hastings, Florida, which will cost much less for shipping.”

After the potatoes arrive and are unloaded into bins, an auger pushes them through a water-filled trough into a large hopper. From the hopper, the taters move through the peeler where brushes and abrasives remove the peel. The newly peeled potatoes then tumble onto the trim table, where an employee deftly hand-cuts any that are too big to fit through the slicing system. 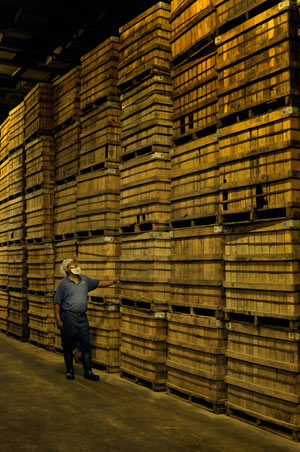 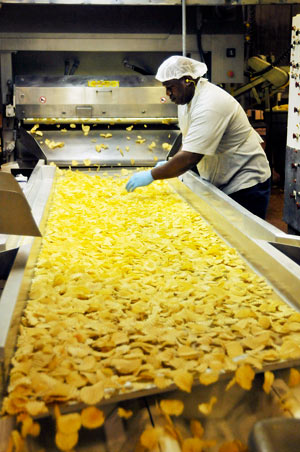 As the potatoes move down the line and into the slicer, the machine makes its cut: wavy, thin or dip-style (thicker than “thin” but with smaller grooves than the “wavy” style).

After earning its cut, the potatoes move into the washer reel, which removes the starch, giving the finished chips a better taste. From the washer, the wet slices proceed along the conveyor belt and are hit with a blast of air to eliminate as much water as possible before they reach the fryer.

Once the slices drop into the fryer, they cook quickly in the bubbling liquid, a blend of palm and cottonseed oils that contains no trans fats. This part of the process takes between four and seven minutes, depending on the thickness of the chips.

From the fryer, mountains of hot chips move under the salter to be lightly dusted with salt. For the record, yes, those still-warm, just-salted chips taste as good as you can imagine! (Golden Flake does make a no-salt potato chip for sodium-restricted customers who love to snack.)

After their salt shower, the chips continue moving along a vibrating table, passing beneath a high-tech camera that looks for defects such as dark chips, green chips or chips with holes. The camera makes a photographic image of all chips, and a blast of air shoots any defective ones out into a bin. There’s also an employee hand-inspecting the moving chips after the camera ensuring no flawed ones are missed. 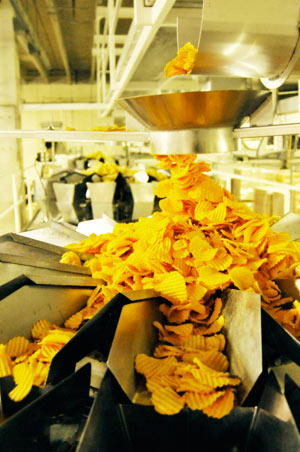 In the quality control lab, a vigilant employee is on-hand any time the production line is running. This person makes sure the correct amount of chips are in every bag, that all seasoned chips are adequately covered and that no defective chips end up in bags, among other responsibilities. It’s a never-ending process.

Once approved, chips gently tumble into bucket lifts where they are transported via conveyor to bagging stations. Any specialty flavored chips—such as the popular Sweet Heat Barbecue or Dill Pickle Thin & Crispy—will go through a seasoning machine prior to hitting the bagger. To avoid any mingling of flavors, each seasoning machine is only used with one type of chip. In other words, the Mesquite Barbecue Dip Style chips will never pass through the same seasoning machine as the Sour Creme ‘N Onion chips.

While the bagging stations are fully automated, once the bags leave the machine, they pop out of a chute where waiting employees quickly pack the bags into cardboard boxes. These boxes are placed on a conveyor belt and shuttled next door to the 25,000-square-foot warehouse. (On a “green” note, these corrugated boxes are recycled and reused as many times as possible.) At the time of my visit, some 35,000 boxes were awaiting shipment and seven semi tractor trailers were backed up to the loading dock. From here, employees stack the trailers floor to ceiling with boxes of snack chips, and the trucks head out for deliveries across the Southeast.

Time is of the essence, as the ingredients are all natural and no preservatives are used. Because of this, the snacks have a limited shelf life. From manufacture date to recommended expiration date, potato chips last 12 weeks, while it’s just nine weeks for tortilla chips. 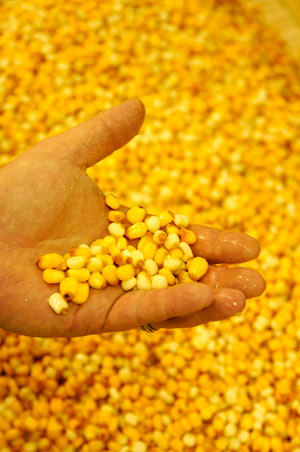 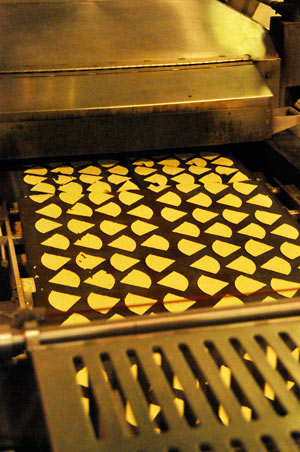 Chip-making has a much higher “waste” ratio than tortilla chip-making.

“It takes about 100 pounds of potatoes to make 25 pounds of chips. That’s because you remove the peel, moisture and scraps from slicing,” explains Jon. “When it comes to tortilla chips, if you have 100 pounds of corn, you probably get close to 90 pounds of finished product.”

All the “leftovers” from chip-making are put to good use, though. Peels, scraps and defective chips are all used to make animal feed. 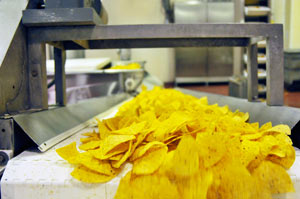 Corn shipments arriving at the plant are unloaded into two large silos, one for white corn and the other a blend of yellow and white. After the kernels are augured into bins inside the factory, they’re pre-cooked and steeped overnight in vats that hold about 700 pounds each.

As production begins, the pre-cooked kernels travel up a conveyor belt into a grinder where stones crush the corn into “masa,” which resembles cornmeal dough. The masa is transferred to a “sheeter” machine where it’s mashed between rollers to the thickness of chips. Then it’s cut into shapes—either triangular or round, depending on the batch being made—and the chips travel down the line into a huge oven.

The tortilla chips pass through the oven in only 18 seconds, but they do so on four different levels, the first being a fired-up 1,000 degrees Fahrenheit and the final level a cooled-down 550 degrees. After this brief pre-baking, the chips drop into the fryer, where they finish cooking in about two minutes.

Next on the conveyor line is the salter. After being salted, tortilla chips travel by bucket lift to bagging machines and bags are then hand-packed into boxes, just as on the potato chip side of the factory. 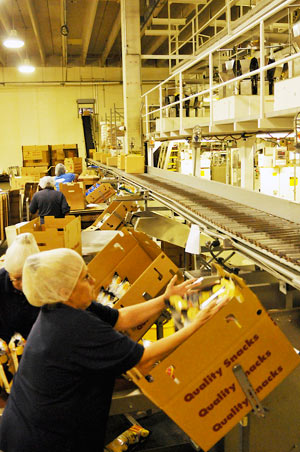 While the bulk of production at Golden Flake is fully automated, human employees are still an essential part of the process. Jon considers them “the last line of defense before the product reaches the consumer.” The company has about 50 full-time employees as well as some additional temporary employees when sales increase.

Efficiency is the name of the game when it comes to making snacks. If you think about it, chips are a very inexpensive commodity, yet behind every bag are the necessary costs of potatoes or corn, oil, fuel for transport and shipping, production equipment, bag and box materials, warehouse overhead and employee salaries.

“Efficiency is the only way you make a profit,” says Jon. “That and controlling the things you can control.”

As automated as the production line is, this is still factory work. The processing and warehouse areas are not air-conditioned or heated, although the packing portion of the plant is cooled by giant fans that keep air moving in the buildings when it’s warm. Nevertheless, it can get pretty toasty during the summer. Likewise, on cold winter mornings, the processing building can be quite cool until the fryers and ovens heat up and take the chill off.

Here in the U.S., over 65,000 people are employed by the potato chip industry. Golden Flake puts a high value on its employees, and Jon points out that quite a few of them have been with the company for many years.

“We’re sales driven, so the manufacturing process varies. But our biggest season is during college football and when the NFL is playing,” says Jon. “The Super Bowl is the biggest snack day of the year. Even people who normally don’t eat snacks eat them on Super Bowl day.”

The trend toward healthier eating in recent years hasn’t really affected sales, he adds. Before the government required that food packages list any trans fats, Golden Flake had already changed their oils to a blend that contained no trans fats.

Sold throughout the Southeast and as far west as Texas and Oklahoma, Golden Flake is known as “the South’s original potato chip.” The Ocala plant turns out 48 types of potato chips and five types of tortilla chips. The all-time best seller?

“The Thin & Crispy plain chip,” says Jon. “And The Sweet Heat Barbecue is the most popular seasoned chip.”

Indeed, these crunchy snacks have come a long way from their creation as “revenge” on a grumpy restaurant patron. It’s safe to say the potato chip is here to stay. 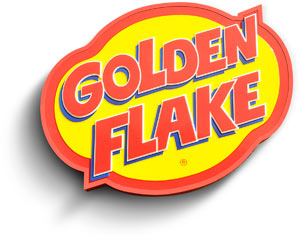 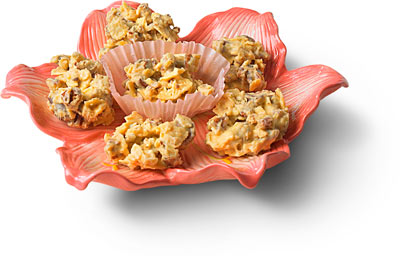 2. Mix melted chocolate with chips and pecans and place in colored baking cups.

3. Cool in refrigerator until candy hardens.