Somewhere over the rainbow, beyond the bumper-to-bumper traffic of East SR 40 and before the beaches of Volusia County, there’s a feeling of maybe we’re not in Florida anymore, Toto. But actually, the strange land stretching and sprawling around you is the Ocala National Forest. And like famous athletes or entertainers known only by their first names, it is simply referred to as The Forest. 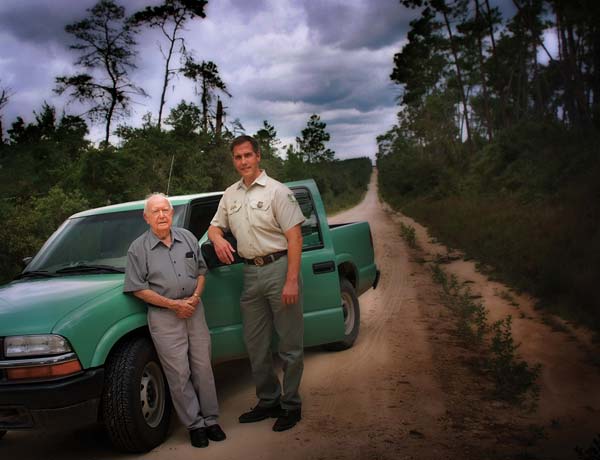 While not exactly the Land of Oz, the Ocala National Forest includes multiple ecosystems of plants, wildlife, rivers, lakes, and springs spread out over three counties. For good measure, throw in a ghost town and a live naval bombing range. Pats Island, one of several land-locked islands in The Forest created when the sea receded 25 million years ago, was the setting for the Marjorie Kinnan Rawlings’ classic novel, The Yearling. There haven’t been any sightings of the Munchkins of the Lollipop Guild, but its human inhabitants have included the Rainbow People, moonshiners, homesteaders, drug dealers, and assorted other criminals.

Yes, people have been murdered in The Forest. And, yes, when someone goes missing, it’s one of the first places the authorities search. Rumors abound that bodies are buried in the thousands of acres of anonymous soil, and people whisper that if someone wants to disappear, The Forest is a good match. Long story short, many hideaways exist in its 384,000 acres.

But The Forest is also about nature’s beauty and bounty. There are some 600 lakes and ponds located within its boundaries. People come to swim in the bubbling aquamarine waters of Juniper and Alexander Springs, camp in the longleaf and sand pine forests, boat on Lake George, hike beneath the canopy of moss-draped oaks, and gaze upon the ever-changing scrub prairies. Wildlife watchers are treated to a Florida pocketbook guide of such creatures as black bears, whitetail deer, gray and red fox, turkey, scrub jay, woodpeckers, bobcat, gopher tortoise, and—if you’re very lucky—maybe even the elusive Florida panther.

THE OLDEST NATIONAL FOREST east of the Mississippi, the Ocala National Forest was established on Nov. 24, 1908, when President Theodore Roosevelt signed the proclamation. Those original 165,000 acres of sand pine scrub have subsequently grown to become the continental United States’ most southern forest and only subtropical one.

Bordered on the north and west by the Ocklawaha River and the St. Johns River on the east, The Forest encompasses nearly the whole eastern half of Marion County. The rest spills over into Putnam and Lake.

In a word, The Forest is big.

And managing it is a big job.

For almost four years now, that difficult task has belonged to Forest District Ranger Rick Lint. A wildlife biologist who has logged stints in Alabama, Mississippi, and Louisiana, Lint is no newbie to the nuances of the South or forest management. But The Forest was a challenge even for Lint from day one.

“I was shocked by the crime issues, the meth labs, the extensive dumping, and motorized vehicle damage,” says Lint, 43, who at 6 feet 4 inches with short-cropped, grey-flecked brown hair could, with the right hat, be Dudley Do-Right’s brother. “When I sat down and talked to the staff, I was told there were places that weren’t safe that you avoided. I thought that was sad—and a little scary.” 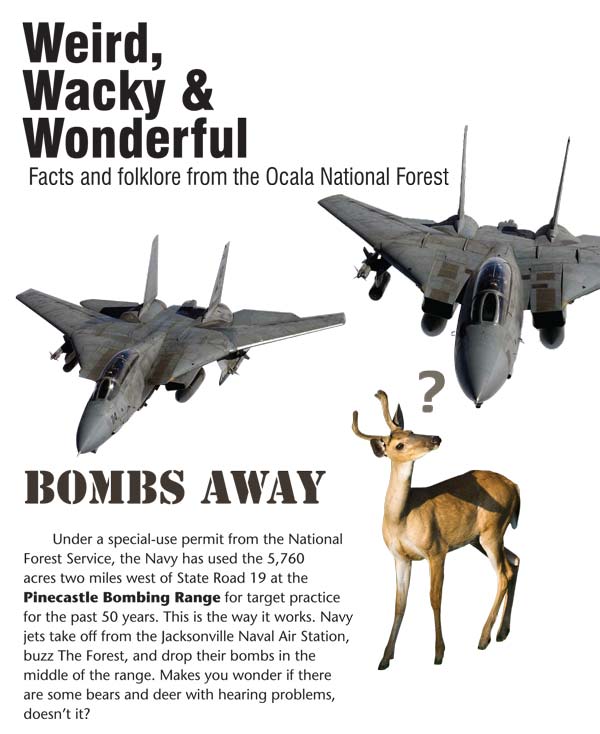 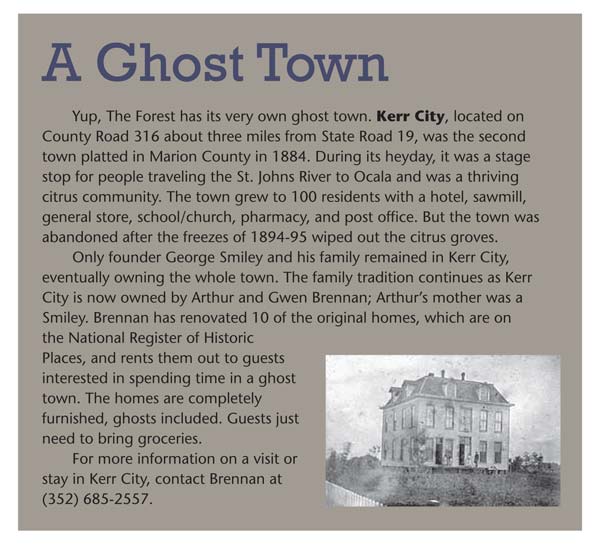 LINT ESTIMATES THAT SOME 600 PEOPLE once lived in roving villages, many involved in illegal activities such as making meth in makeshift labs. Very quickly, he got a firsthand introduction to The Forest’s dark side.

“The first summer I was here, a meth lab set up in a tent caught fire. If not for a quick response by all the authorities involved, that could’ve been a disaster,” recalls Lint.

“And then there was the Crazy Lisa incident with the Boy Scouts troop camped out at Buck Lake,” he continues. “The people squatting there felt like the Boy Scouts were trespassing and made the troop miserable all night long. In the morning, this woman known as Crazy Lisa runs into the camp with a butcher knife, falls to her knees, and starts stabbing the ground in front of these terrorized kids.”

That was it for Lint. The line in the Florida sand had been drawn.

He rallied the forces, consulted with various experts and specialists, and devised a plan dubbed “Reshaping the Ocala.” Lint began attacking the problems from the bottom up.

“We divided it up into sections, beginning with those with the most problems,” explains Lint, who oversees a full-time staff of 50. “Little things like littering, vandalism, and squatting set the stage for the bigger issues and crimes. We doubled our law enforcement officers, strengthened our ties with the various county authorities, and started issuing fines, moving people out and, when necessary, arresting people. The word spread that we were serious about restoring order to The Forest.” 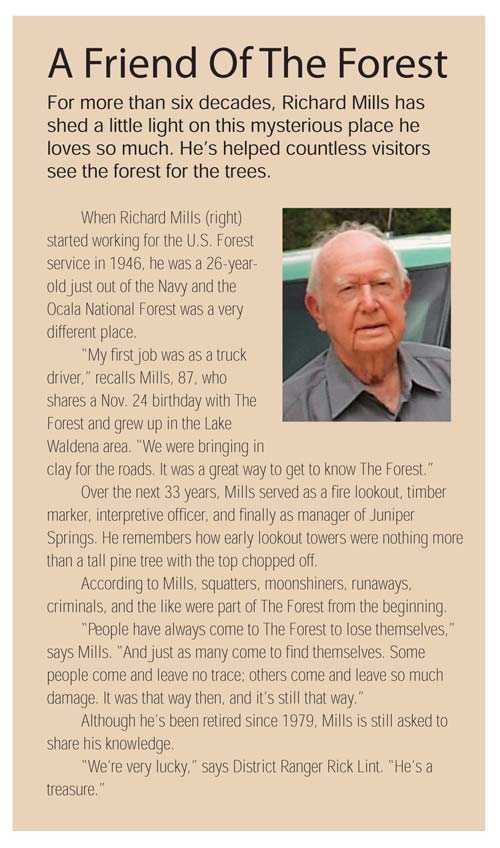 WHILE THE QUALITY AND SAFETY of The Forest is, according to Lint, greatly improved, he admits this will be an ongoing project.

“We still have issues,” he says, “but it’s become much more manageable thanks to our staff, county authorities, and The Forest volunteers, anywhere from 40 to 70 at any given time. They play a crucial role because they’re our eyes and ears in the campgrounds. Now it’s more a sense of community than the wild, wild Forest. That’s what we want to build on.”

The many facets of The Forest’s image have always created what Lint describes as “an identity crisis.” The Forest Service falls under the auspices of the United States Department of Agriculture, its mission a see-saw balance between conservation and recreation.

“We are stewards of this land, and The Forest is a national treasure,” says Lint. “But we have to maintain a balance of preserving the land and allowing public use.”

Lint estimates there are 10 million people within an hour’s drive of The Forest and about 2.9 million visitors each year.

“Everyone should come,” says Lint. “But we have to protect and preserve it for generations to come, too. The Forest is a gift that should be shared and passed on.” 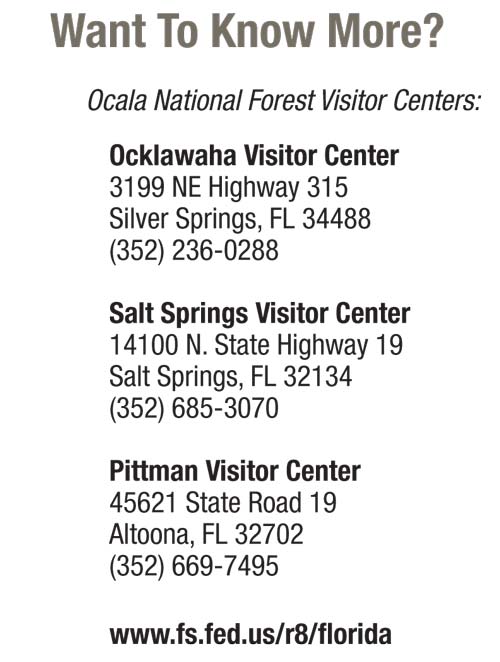