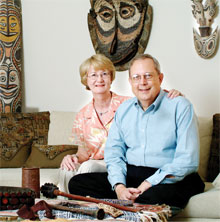 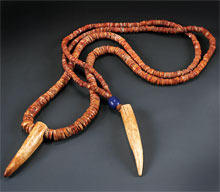 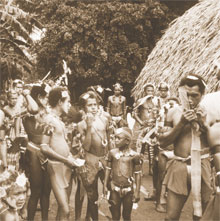 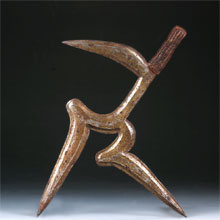 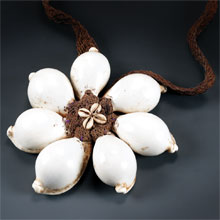 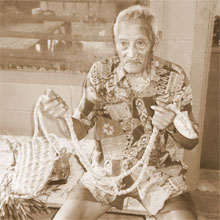 Chuck Opitz loves money. So much so that he has traveled the world in pursuit of it. Filled his home with it. Written four books about it.

But the money that Chuck pursues is not old-fashioned, boring, greed-is-good money. It isn’t the conventional currency of paper and coins.

The object of the Opitzes’ obsession is called traditional money. Yet it comes from exotic places all over the world in the most non-traditional forms: shields, masks, beads, teeth, spears, knives, stones, clothing, rope, shells, and feathers. It comes from places such as Papua New Guinea, Africa, the Solomon Islands, the Trobriand Islands, Indonesia, Thailand, India, Morocco, Egypt, Singapore, Hong Kong, Japan, Palau, and Yap Island.

What inspired the Opitzes to study and collect traditional money is that it isn’t just about buying something. Or even bartering or exchanging one materialistic thing for another. Traditional money is about the diverse people of the world and their cultures. About the traditions that unite them, preserve their history, and ensure their future.

Traditional money is used by cultures throughout the world, not for the mundane needs of every day, but for the important events in life: rites of passage into manhood and womanhood, marriage, death, the birth of a child, a show of friendship, paying respect. What conventional money can’t buy, traditional money honors.

Chuck Opitz’s attraction to numismatics, the study of money, began early. As a boy, he collected coins and then became interested in traditional money while pursuing, appropriately enough, an accounting degree at the University of Wisconsin at Milwaukee.

“Someone in my coin club told me about traditional money, then more commonly called odd and curious money,” he recalls.

A bit of kismet would also come into play during those college years when Chuck met Karen, his future wife. As fate would have it, Karen was an education major with minors in both art and anthropology. Chuck couldn’t have custom-ordered a better partner for what would become a lifelong obsession. Married now 40 years, the two have raised a family and founded First Impressions Printing, Inc. while traveling the world together to study cultures and traditional money.

“My interest in art and anthropology fit just perfectly with Chuck’s interest in traditional money,” says Karen. “We both enjoy doing all of the research before we decide where to go. The best part for us is meeting the people of all these different cultures.”

Karen is also responsible for one of the most prized items in Chuck’s traditional money collection. “As a wedding gift, Chuck gave me a diamond ring,” she says. “I asked him what he really wanted as a wedding gift from me. He said he wanted a Yap stone.”

Now a Yap stone is not exactly something you can pick up at the mall. In fact, there’s only one place in the world from where the traditional stone money originates and that’s Yap Island. Get out a map of the world or a globe, locate Micronesia (4,400 miles southwest of Hawaii), and that’s where you’ll find Yap Island. This wedding present was going to be a challenge for Karen.

“I started making contacts, inquiries and writing letters in 1966,” says Karen. “It took a year before we were able to get the Yap stone.”

And the timing couldn’t have been better, as the Opitz’s stone was one of the last to be allowed out of Yap. The wedding present Yap stone, round with a hole in the middle, is 23 inches in diameter and weighs 66 pounds. It cost $57.50, with $71.87 more for shipping. It now resides in one of two rooms in the Opitz home devoted to the traditional money collection.

“I told Chuck that if we ever get a divorce, I’m taking the Yap stone,” says Karen.

Around the World in 31 Years

The couple’s first traditional money expedition took them to Papua New Guinea in 1973. “We left the kids with relatives, made out our wills, and took off,” says Chuck. “We were gone for a month. We met native people there who had very little experience with Westerners. Every aspect of their lives is based on traditional money.”

Besides gathering great stories and taking stunning photos of the various tribes, they sent back a 1,100-pound mahogany trunk filled with traditional money. Things like shell armbands; necklaces made of boar tusk, dog teeth and shells; nose rings of shell and bone; reptile skin drums; knives; and spears.

“It definitely added greatly to my traditional money collection,” says Chuck. “We’ve been traveling ever since.”

Relocating to Ocala in 1977 didn’t dampen Chuck and Karen’s wanderlust one bit. While they made the move when Chuck accepted the position of vice president of finance at Closet Maid Inc., a year later they established First Impressions Printing. “We decided that the best way for us to be able to travel like we wanted was to have our own business,” says Karen. “That way we could plan our time off together and be gone as long as we wanted.”

When asked where they haven’t been, Chuck replies, “Antarctica and a few other places.”

Remember that Yap stone wedding present? Well, while Chuck was delighted to receive it, it didn’t quite quench his desire to see the traditional money in its natural setting. Last February, some 36 years after receiving that Yap stone, he got his wish.

During a 17-day trip to Yap and Palau Islands, Chuck and Karen definitely got to see Yap stones up close and personal. They also got to meet tribal chiefs, a clan queen, and visit a forbidden island.

Just like acquiring the Yap stone was an arduous process, so was planning a trip to the island. “It took months of making contacts and sending references before we were cleared to go,” says Karen. “We began in October and didn’t actually go until February.”

“It was an unbelievable trip,” says Chuck. “The cultures of the two islands are unique in their own rights. We felt very fortunate and privileged to experience all that we did.”

Discovered by a Portuguese explorer in 1526, Yap Island has been under Spanish sovereignty, owned by Germany, and occupied by Japan. Set up as a trust territory by the United Nations in 1947, Yap Island was overseen by the United States until 1990. It then became part of The Federated States of Micronesia. The state of Yap is made up of four large main islands — Yap, Maap, Tomil, and Rumung — and 15 outer ones. Colonia, the district center or capital, is located on the principal island of Yap.

“While the American influence is there — they do speak English and use American money — the Yapese are a very quiet, shy people. As we visited the villages, many would hide from us,” says Chuck. “Their culture is agriculture-based and very much rooted in their traditions.”

Chuck and Karen got a good dose of that tradition the moment they stepped off the plane at the small Yap airport. “We were greeted by a topless Yapese girl in a grass skirt and a boy in thu, which is a piece of cloth that is wrapped around the waist and through the legs,” says Karen. “We were each given a lei. And as we traveled from village to village, we carried a small green branch and walked in single file to show we came in peace, and as a sign of respect.”

Respect is not taken lightly in Yap. All the land, except for the capital city, is privately owned and permission must be obtained beforehand to cross the land or enter a village. Each village has its own Yap stone bank, which is a stone pathway bordered by upright Yap stones of varying sizes. While Yap stone money can be as small as two to three inches in diameter, the ones lining the pathways were generally four to six feet in diameter.

“Each village is very proud of their Yap stone banks,” says Chuck. “You must get permission to see them and you must pay respect to them.”

During their visit, Chuck and Karen met Yap tribal chiefs Louis Pitmag and Walter Chieng. Both chiefs were very generous and showed them many pieces of their traditional money, including gau. This is a string of coral beads that can be six feet long and generally has one or two whale’s teeth attached to it. While the Yap stones are the most widely known forms of traditional money on the island, gau is the most valuable and rarest.

“Only the most important Yapese chiefs have gau,” says Chuck. “We were very honored that these two chiefs shared this with us.”

Having realized a lifelong dream and just back from Yap Island, are Chuck and Karen’s traditional money excursions over? Not hardly.

“Oh, there are still so many places to go to,” says Karen. “There’s Machu Picchu, Burma, Nepal.”

Told you. Chuck Opitz loves money — traditional money that is.

You might want to check out An Ethnographic Study of Traditional Money by Charles J. Opitz. The 410-page book is the result of 26 years of research by the author on traditional money throughout the world. It contains the culture, history, and usage of traditional money, as well as 1,200 photographs. It was named a “Best World Coin Book of the Year” by the Numismatic Literary Guild. For more information, go to traditionalmoney.com