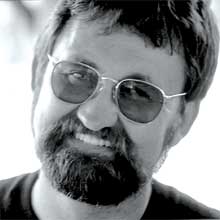 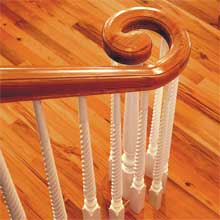 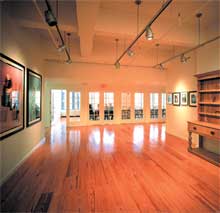 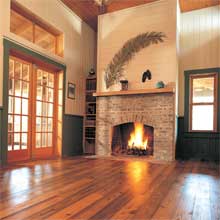 The Goodwin Heart Pine Company in Micanopy specializes in reclaiming valuable heartwood from area waterways and structures. In addition to many devoted local clients that span nearly 30 years, Oprah, Bob Vila, Paul McCartney, and Ted Turner have each sought the stunning finished products of George Goodwin and his one-of-a-kind company.

It’s a hot day and George Goodwin would rather be fishing. Instead, he climbs in the saw cab, the air-conditioned control room that houses everything he needs to propel a powerful saw through a 500-year-old log.

Soon the pricey blade is slicing through the hard wood like liquid and everyone at the Micanopy manufacturing facility knows not to interrupt the boss. Goodwin is not known for his patience when it comes to anything that disturbs the production of the luxury flooring, stair parts, and millwork his company produces from rare antique logs.

“When you think about what these trees have been through in the last several hundred years and the efforts taken to reclaim and mill this wood, I’d be a very foolish man to squander even a foot,” he says, wiping his forehead against his sleeve.

And it has been quite a journey, according to the historians and foresters who have documented the clear cutting of longleaf heart pine forests that once covered 90 million acres of the southeast. These trees from our first forests were cut down by hand to build homes, factories, ships, bridges, and dock pilings in a new America. The wood was even valued by European builders, who had it shipped across the Atlantic for ornate Victorian hotels, many of which still stand today.

George Goodwin knew he was on to something the minute a diver friend brought him some longleaf logs found in the Suwannee River. Goodwin, a master carpenter and antique lighting dealer, was building his own dream home. Once the logs were milled, the unusual qualities of the wood literally changed the course of his life.

Instinctively, Goodwin — a history buff who was raised in north Jacksonville and spent most free moments on the water or in the woods — could relate to the saga of these southern trees. Old photos document the story of the hard-working logging crews, who would arrive deep in the forest, cut the trees down by hand, and pull them by oxen or horse to nearby rivers. The logs would be lashed together into rafts and floated to downstream mills. Occasionally, the heavier logs — the densest logs with more heartwood — would slip off and sink into their oxygen-free resting place.

Cutting into the long, lean logs is like opening a treasure chest, only this time the treasure has marked time — in some cases, as much as 200 years — in riverbeds instead of on the ocean bottom. The logs reveal tight grains of pinstripes and arching swirls, very few small knots, and 100 percent heartwood, qualities possible only because the tall and slender longleaf grows only one inch in diameter every 30 years.

It is the slow growth that makes the wood harder than red oak. And it is the long growing time — up to 500 years — that produces the rich red heartwood.

“You would think the water would rot the wood, but actually it is just the opposite,” Goodwin offers. “The cool, spring-fed water preserves the wood in pristine condition. This wood looks exactly like what our ancestors used when building George Washington’s Mount Vernon or Thomas Jefferson’s Monticello.”

Today, there are a just few thousand acres of protected longleaf forests remaining, so the only way to purchase the wood today is from companies that deconstruct and re-mill wood from old buildings or — most uncommon — from those like Goodwin that recovers the original logs from rivers.

Goodwin mills both the building- and river-reclaimed heart pine as well as wild black cherry and antique river-recovered heart cypress, a personal favorite of Frank Lloyd Wright and Carol Goodwin, George’s wife and side-by-side partner in the business.

“I’ve learned more than I ever thought possible about fine woods and love them all,” she says, “but the subtle swirls and colors of original-growth heart cypress captivate me. It just has so much personality and character.”

One of the few surviving prehistoric species left standing, the Bald Cypress tree can live more than 2,000 years and grow wider than eight feet in diameter. Goodwin has recovered cypress logs up to 1,700 years old, one of which is believed to be the largest found in the last 25 years. Resistant to insects and water, heart cypress is usually the healthiest wood found when Frank Lloyd Wright’s homes are restored.

Since George Goodwin started Goodwin Heart Pine Company in 1976, he sometimes has felt the frustrations of taking a road less traveled. For instance, to make sure the river environments were protected and not destroyed by amateur divers diving for extra dollars, he worked closely with state government officials to write and implement licensing laws.

“We’ve been pretty fortunate through the years,” George suggests. While we haven’t done a great deal of advertising, people who understand these woods have found us, and our wood can be found in some prestigious locations.”

Indeed, the notable clients listed on their website are lengthy, including the likes of Oprah, Bob Vila, Paul McCartney, and Ted Turner. The company also has captured several national awards and is regularly featured in national magazines such as House Beautiful and Bon Appetit. Widely read Florida Design magazine featured two Ocala homes recently with Goodwin flooring and paneling.

For a small company, Goodwin Heart Pine Company, with its 25-employee workforce tucked off US 441 near Paines Prairie, has persevered by quality craftsmanship and national-level education efforts. Carol Goodwin frequently speaks to designer, builder, and architect groups, whether for small city chapters or at national meetings.

The Goodwins also are active in environmental organizations, including the Association for the Restoration of Longleaf Pines, which they founded. It will take at least another 300 years for those slow-growing longleaf pines to become mainly heart, but at least they know the floors they mill today will still be at work for many more generations.

“The environmental conditions of the original-growth forests produced extraordinary wood that can’t be recreated,” George adds. “There simply is no comparison between these woods and today’s young woods when it comes to durability, grain, color, and vibrancy.

“I admit it’s an unusual way to make a living,” he continues, “but I get a real deep sense of satisfaction knowing that Goodwin floors will last a long, long time and have a history all their own.”