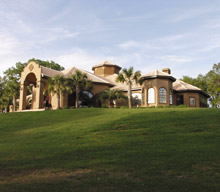 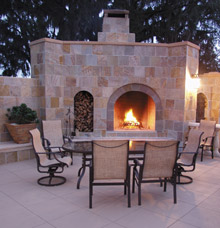 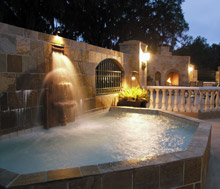 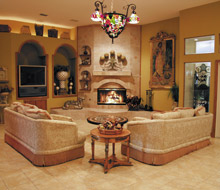 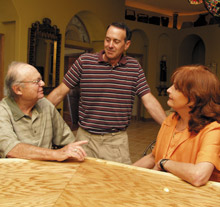 We all have a house in our imaginations. It’s different from all the other houses, of course, because it is distinctly and absolutely our own. It has the space we need and want, in the style that expresses who we are and how we choose to live.

Lately, it seems that Marion County has become a popular place to build large, out-of-the-ordinary houses. Like John Travolta and Kelly Preston’s Anthony home, built next to Jumbolair’s private airport runway, these one-of-a-kind houses are located in exactly the place the owners want to be.

Some builders especially enjoy the challenge of coordinating the details of this kind of unusual project. Chris Morrison of AAA Builders says he especially enjoys working closely with future residents to discover and create the unique home that’s been living in their imaginations.

Several years ago, when Max and Diane Hugel purchased 280 acres in the midst of Northwest Marion’s prettiest horse country, they knew that someday they would build a house there.

It wasn’t going to happen right away, however. Business and political interests in New Hampshire and Washington, D.C., still kept them up north most of the year. Max Hugel has had a long career as an executive with international corporations. He also has an interest in a cable network and communications company. Through his political ideals, he had become involved in New Hampshire grass roots politics, then national politics, and — during the Reagan administration — he had served as Deputy Director of the CIA.

He was also a part owner in the Rockingham, New Hampshire, racetrack and had begun breeding Thoroughbreds in Florida.

As time went on, Max and Diane found that the time they were spending in Ocala was lengthening each year. They decided it was time to start working on plans for their new home.

“Not to retire,” smiles Max. “I wasn’t ready for a rocking chair yet. I still wanted to have the challenges of business, but I was ready to take life a little easier.”

The couple decided to sell most of their northwest Marion property, keeping their favorite 25 acres as the site for their new home.

“It was the highest part of the property,” explains Diane. “The top of the hill seemed to be the perfect spot for the kind of house we wanted to build.”

“I think I can see Orlando from this hill,” quips Max. “I don’t know the exact elevation, but it’s really quite high here.”

By the time they had selected their exact homesite, they had also decided that well-respected consulting engineer and designer Miles Christian Anderson would design their house. They knew his work and felt his experience with large, unusual custom homes was exactly what they needed for their important project.

They wanted it to be a large home where they could entertain their friends — where their children and grandchildren could come and stay as long as they wished. There was a long list of must-have features they wanted to incorporate into the design: an indoor pool and sauna, a commercial-grade kitchen, and an oversized dining and entertainment area.

Their lakefront home in New Hampshire is very traditional and though they love its comfortable design, they wanted their Florida home to be very different. They wanted it to be more open, with rooms and entertainment areas that flowed into one another. They wanted large windows on every wall, so they could enjoy the magnificent views of the surrounding rolling countryside. They wanted tile and wood floors throughout, to help maintain the open feeling and set the right stage for the Old World look Diane wanted to incorporate into the décor.

Their designer, Miles Christian Anderson, had grown up in Barbados and was educated in Europe. He understood the kind of design that Max and Diane wanted, and incorporated many distinctive architectural features into the plans to achieve that look.

Chris Morrison was among the contractors that Miles recommended to the Hugels. He and Chris had worked together on several large projects. He was very familiar with Chris’ work and believed that he had the talent and temperament to work well with clients like the Hugels who had strong ideas of what they wanted their house to be.

At their first meeting, Diane says she knew that Chris Morrison was the right builder for them.

“We had met with other builders who tried to talk us out of features that would be difficult to pull off. But Chris was willing to work with us to make sure we got exactly what we wanted.”

Chris Morrison says that he tells clients to find a photograph of any feature they would like to incorporate into their residence, and that he will do his best to find a source for it. If not, he will have it made to order.

“One of the features that Diane wanted was a very heavy, Old European-style front door with distinctive hardware,” he says. “We were not able to find the door, so we made it. And we were able to order essentially the same hardware from a domestic supplier for much less than what was used on the original door she had admired.”

Construction began on the 12,200 sq. ft. home that summer. The couple wanted the house finished in time for a party the following May. They planned to celebrate Max’s birthday and completion of the home with one large, festive gathering of family and friends before heading north for the summer racing season.

There were lots of additions and changes during construction, as there always are for this kind of house, but construction progressed well. Meanwhile, Diane shopped for everything she needed to furnish the home, pulling together antiques and reproductions, paintings and decorative items from around the world. A few days before Max’s birthday celebration, nearly all the paint was dry and most of the furniture was in place. Except for one important detail: the dining room table.

After construction was underway on their house, the couple began looking for a distinctive table to complement their large, circular dining room. They discovered a possible resource for such a piece when they were shopping in Orlando for oriental groceries. There was a store near the grocers that featured furniture made in China by members of the proprietor’s family. They spoke with the owner about the table they wanted for the capacious dining room, the one they had not been able to find anywhere, the one they weren’t even sure could be built.

The man assured them that he could have it constructed for them in China of solid rosewood. He made plans to come to the construction site in Reddick to survey the room and finalize the one-of-a-kind table design.

“But,” Max asked, “can it possibly be finished, shipped, and put in place in time for our May party?”

The man assured Max that it could. After it was made, it would be sent by ship, in pieces, inside a container, he explained. When it arrived in San Francisco, the container would be transferred to a truck carrier and driven across the country. He promised that a crew would arrive at their home with the shipment, to put the table together in the new dining room of the completed house.

Just two before the long-planned party, the table was delivered by several workers from China and from the company’s operations in Orlando. Armed with diagrams and detailed instructions, they began trying to put the pieces together.

After several hours, it became apparent that there was a problem. They couldn’t figure out how to assemble it. After all those months of anticipation, it looked like they might not have their dining room table after all.

The Hugels called Chris, who lived just a few minutes away, for help.

“By then Chris had become our friend,” says Diane. “We worked so closely with him for so long. He had solved so many problems during our construction; we hoped he would be able to solve this one.”

An hour later, the beautiful, shining rosewood table stood proudly in the middle of the dining room, surrounded by its 24 chairs.

“Thank goodness for Chris,” says Diane. “We had a wonderful party. Our four children and 11 grandchildren came from all over the eastern part of the country to help us celebrate. It was a night we will never forget.”

Last summer, a 3,000 sq. ft. exterior courtyard was added to the estate.

“We definitely wanted an Old World look out there as well,” explains Diane. “Chris located some wonderful natural quarry stone from a local operation, and it’s just magnificent.

“The house is everything we wanted it to be,” she says, “but it’s still a work in progress. We have plans for additions and a barn for the horses and, well, who knows? That’s part of the fun.”