Allowance coins jingling in your pocket, you run down to the sidewalk, careful not to fall and scrape your knees. A man in a window leans forward to take your order. You point to a sticker, slightly faded from sunlight. You hand him your money as he hands you your snack. Paper torn, a lick, a crunch. Hands slightly grubby, your treat is already melting from the summer heat. The music fades as the ice cream truck drives off, farther and farther away, until all you hear are the neighbors’ sprinklers and the song of cicadas. At least, that’s what I remember when I bite into a Nestlé Drumstick.

Soft serve or scoop, in a parlor or at your home, eating ice cream is a personal, nostalgic experience. As an ice cream enthusiast who has yet to suffer from brain freeze, I journeyed to get the inside scoop (pun intended) on the beloved frozen treat. My first stop is a place where people are a little crazy—at least when it comes to serving up dessert.

A zany setup greets me as I step inside Krazy Kones ice cream parlor on Silver Springs Boulevard. Neon pink and blue walls, photos of miniature horses and posters of ogre-sized Chicago hotdogs are all a part of the décor—besides the gigantic metallic contraption the owner proudly pats behind the counter. 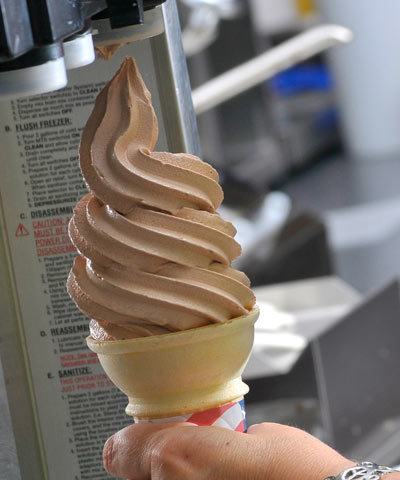 “This is the Electro Freeze,” says Bob Rutledge, who opened Krazy Kones with his wife Colleen in October 2010.

The Electro Freeze is a soft serve ice cream machine that features vanilla, chocolate and a tasty swirl of both flavors. The parlor specializes in soft serve ice cream and depends on the Electro Freeze, but its star is the Astro Blender, a powerful machine with the capacity to blend any combination of more than 24 flavors. The options are only as limited as the customer’s imagination.

“We’ve probably got the best soft serve ice cream within a hundred miles,” Bob says, handing me a cone of chocolate.

Admittedly more partial to the hard stuff, I take a careful lick and instantly become enamored by the creamy, smooth texture. This soft serve doesn’t run the gamut of fast food chain ice cream, which can sometimes be gritty and leave a strange aftertaste. Alas! I have been converted!

Besides churning out sublime ice cream, the Rutledges also raise miniature horses on their farm—hence the photos.

“You’re going to love this.” Bob slaps his hand on his knee, “Know what the name of our farm is? Candyland!”

Love Is a Many Blender Thing

With Krazy Kones’ Astro Blender, the flavor combinations are endless. Consider the possibilities (and yes, this is just the beginning):

Behind the Scenes at Bruster’s

Before I commit myself to the soft serve life, I venture to the other side of town for a little tour inside Bruster’s, where hard ice cream rules the roost. 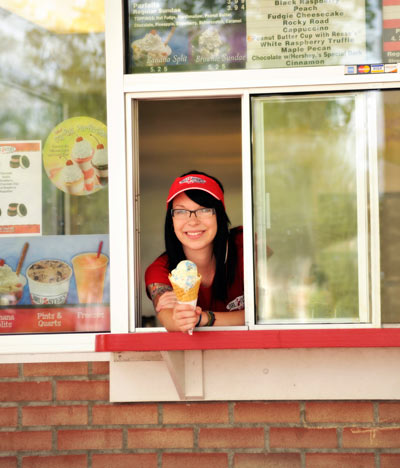 Bruster’s Real Ice Cream was founded by Bruce Reed in Bridgewater, Pennsylvania in 1989. The demand for Bruster’s tasty treats became so popular that Reed started franchising in 1994. Lucky for ice cream-loving Ocalans!

At Bruster’s I’m welcomed inside by franchisee Richard Sturgis. A wondrous place lies beyond the glass slide windows where customers make their order. The scent of waffle cones hangs thickly in the air, and it’s a mystery how the workers can restrain themselves from digging into the rows of ice cream freezers.

Since its opening, Bruster’s has won first place in the desserts category at Taste of Ocala for four consecutive years. And it’s no wonder!

The secret to their success is that there is no secret—just good ol’ fashioned ice cream making.

“We don’t churn backwards,” says Richard, “we just make ice cream the old-fashioned way—with the best ingredients we can get.”

Richard’s favorite flavor of the moment is peanut butter puddles, but he tells me it changes quite often. The most popular flavor? Butter pecan.

“I was the complaint department,” he says.

He reaches into a freezer and hands me a sample of black raspberry ice cream. One taste and I immediately say, “Whoa!”

Richard beams. “How cool is it that I get to hear that every day?”

With a Cherry On Top

After visiting the previously mentioned parlors, it was time to track down the glorified symbol of childhood dog days: the ice cream truck. Luckily, I didn’t have to sprint down the street to chat with Sherman Young, a popular ice cream truck driver in Marion Oaks. My heart starts to race when I see his mammoth of a truck decked out in stickers. Apparently, you never grow out of that desire to chase. 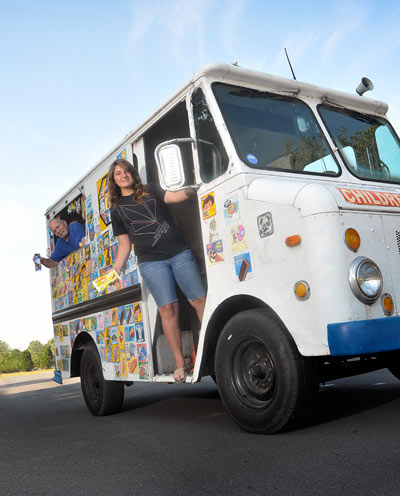 “Everything on the truck is there for a reason,” says Sherman. “It’s somebody’s favorite. If someone asks for something, you don’t just say, ‘We don’t carry it.’” This philosophy has earned Sherman and his daughter Sarah a loyal customer base, and with 22 neighborhoods and 100 to 200 stops a day, that’s a lot of ice cream to hand out.

While being an ice cream truck driver sounds like a sweet job, there are plenty of mechanical snags to contend with. But the Youngs have endured and are no strangers to life’s challenges.

After his retirement from a car business in Massachusetts several years ago, Sherman was divorced, a single parent and basically homeless. He started driving the ice cream truck to make a living.

“As a single parent,” Sherman says, “this was the answer for me.” A high school honors student, Sarah helps her father with the business while also doing schoolwork on the truck.

“Families comment on how I’ve grown up, and then we see their kids and then say, ‘Wow!’” says Sarah.

The Youngs’ relationship with their customers is built on reliability and trust. Unlike some sellers, the Youngs don’t refreeze their products. Sherman knows you don’t fool around with a customer’s happiness.

Occasionally, however, the Youngs do get an unhappy customer. The music box signaling their arrival plays 50 songs, including Christmas carols.

“We have old people shaking their fists at us,” Sarah laughs.

Haven’t they ever heard of Christmas in July?

Serve Me Up Some Nostalgia

Here’s a taste of the Youngs’ extensive inventory. Your sugar-tooth’s discretion is advised.

So what’s left after visiting ice cream shops and hunting down the mystical ice cream truck? The cherished frozen section at the grocery store, of course! After scouring the freezers and leaving handprints on the foggy doors, I’ve discovered a few flavors worth trying.

Häagen-Dazs Rocky Road: Ben and Jerry’s isn’t the only ice cream with a conscience. Häagen-Dazs is donating money to help fund honeybee research. Honeybees, which pollinate one-third of our food supply, are disappearing at an alarming rate. You can help the honeybees by purchasing bee-built flavors, such as Rocky Road: a rich chocolate ice cream with gooey marshmallow and roasted almonds. To learn more, visit helpthehoneybees.com.

Blue Bell Ice Cream Southern Blackberry Cobbler: In my opinion, Blue Bell’s vanilla has the creamiest texture and most luscious taste. This brand’s ice cream can stand alone without any mix-ins, but the Southern Blackberry Cobbler is a taste-worthy marvel. With pieces of pie crust and blackberries that give the vanilla ice cream a lavender tinge, this flavor is truly a “berry” good dessert.

Would You Eat That?

You don’t know you’ll like it unless you try it—but even the most adventurous globetrotter would hesitate with these ice cream flavors!

Purchase Cuisinart’s Mix It In Soft Serve Ice Cream Maker, which comes with built-in dispensers for toppings and a cone holder. Makes making your own ice cream at home a cinch