What do four women who enjoy life and each other do when they get together?

They get a tattoo, of course!

Chris Kao, who owns Perfect 10 Salon in Fruitland Park, recently went through a tough battle with breast cancer. Like most survivors, she has a renewed sense of life and a desire to live it with joy every day. Recalling that her grandmother, Doris Lesemen, had once said she’d like to get a tattoo before…  well, before it was too late, Chris decided it was a good time to fulfill the wish. 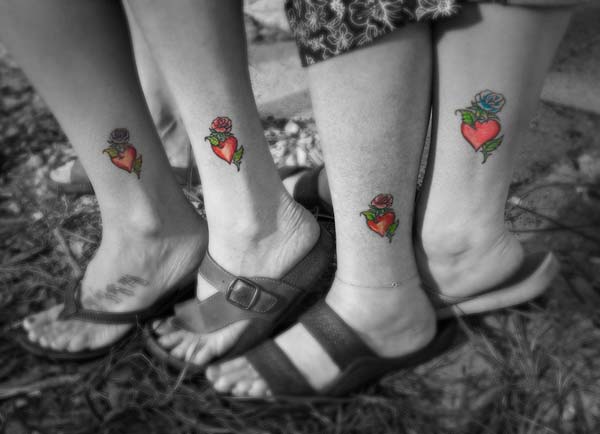 “I remembered my grandmother saying she wanted to get a tattoo, and I decided I wanted to be there,” Chris says. “Then I decided if she could get a tattoo, I could, too. When I told Ryan and Angela, they decided we should make it a multi-generational event.”

Ryan Quintanilla is Chris’ daughter and Angela Friend is her niece. Both young women have small children—Ryan has three and Angela, four—so planning a time when the four women could get together proved a challenge. Adding to the challenge was the fact that Doris lives in Indiana most of the year.

“It became a little stressful,” Angela admits. “It was hard to find a time with the tattoo guy because there were four of us, and he was usually pretty busy. We also had to find a babysitter for our children. Fortunately, my husband was able to watch them in the car while I was getting my tattoo, and then I took over.”

The three younger women decided they would go with whichever design Doris picked and have it done in the same location—right above the ankle—so that their tattoos matched.

“Getting a tattoo was on her list of things she really wanted to do,” Ryan says. “After she looked at the tattoo ‘flash,’ she picked out a design I had shown her that included a rose and a heart. Though we all had the tattoos put in the same place, Angela and I chose different colors for ours.”

“It’s a heart with the rose stem piercing it and the rose is in full bloom,” Chris adds. “Ryan’s rose is purple and Angela’s is blue. My grandmother and I both got pink roses.”

The ladies were afraid their grandmother might rethink the idea after Angela had a tough time with hers. While she already has a tattoo on her wrist, Angela’s newest one proved to be a little stressful. Ryan has several tattoos herself, but this would be a first for Chris and Doris. However, Doris moved right up when it was her turn and didn’t even flinch during the procedure. 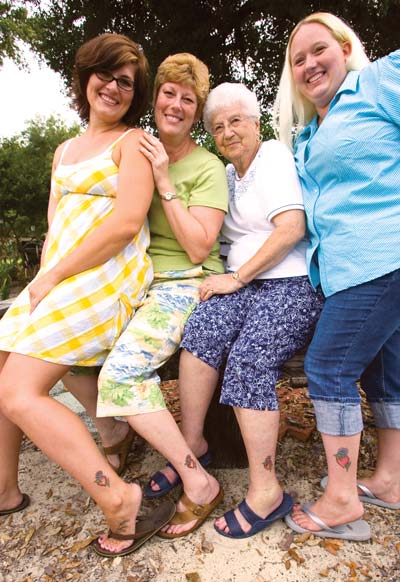 “It wasn’t painful at all. When he highlighted the heart, it hurt a little bit, but it wasn’t bad,” Doris says. “He said it was the first time he’d done a tattoo for an 88-year-old lady. My friends in Indiana think I’m crazy for getting it done, but I’m glad I did.”

Rumor has it Doris couldn’t wait for spring to arrive so she could wear capri pants and show off her tattoo. All four ladies agree the event was a nice memory for them and a wonderful thing to do together.

“It created a special bond. There’s always been a distance between me and grandmother because I’ve never lived where she does,” Chris says. “The tattoo creates evidence of a special time we had together, and with Ryan and Angela.”

Doris returned to Lake County in July, thrilled to be able to celebrate Chris’ 50th birthday. She says she wishes her other daughter and granddaughters would get tattoos, too.

“But I know they won’t,” she adds with a hearty laugh.

“The overall experience was great,” Angela says. “I will always treasure the memories with my grandmother and this will be my favorite. My grandmother is such a beautiful person inside and out, and I’m so happy we got to do this together.”

Ryan says each of her tattoos holds a special meaning for her.

“But this one is really special because I had it done with mother, my cousin, and my great-grandmother. I chose purple for my rose to honor my late Memaw, my mother’s mother. Her birthday is in February, and she loved African violets,” Ryan says. “I love my new tattoo and always will because of the special memories it will evoke.”

After the life-altering experiences she’s had this year, Chris says, “it’s really nice having a tattoo to memorialize this special occasion.”