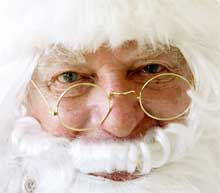 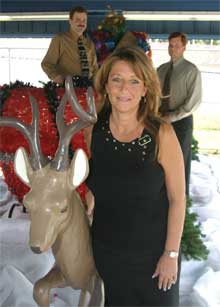 Everyone knows that the highlight of the Christmas parade is when Santa’s float comes into view. As Santa gives a hearty “ho ho ho” and a big belly laugh, little boys and girls clap with anticipation. Unfortunately, the story of Ocala’s Santa float is filled with unfortunate accidents and horrific acts of nature.

“Silver Springs was the main sponsor for many years,” Sue Mosley says. “They re-did the float and painted it silver.”

Once new management took over Silver Springs, however, the float once again found itself without a home.

“Then we moved on to the Chamber of Commerce as the float sponsor,” Sue says. “When that didn’t work anymore, the Friends of the Christmas Parade was formed and took over.”

For the past eight years, Sue, along with Deputy Chief of Police Greg Graham, has taken on the responsibility of storing and preparing the enormous float for the annual parade, along with a small group of dedicated and talented individuals. From that very first year, Greg and Sue realized what they were in store for.

“In the beginning, the float was stored in a utility facility,” Greg says. “When we got there to remove the float before the parade, it was pretty nasty. The float was covered in dirt and leaves.”

“We tried to use white spray paint to make everything look fresh and snowy again,” Sue laughs. “After the parade, we didn’t have anywhere to keep the float.”

“We covered it with plastic and figured everything would be fine,” Greg says.

Wrong. That year, the waste management facility found itself in the path of a dangerous tornado.

“When we got to the float nine days before the parade and pulled the plastic off, our white float was completely black with grime,” Greg says. “Days before the parade, we were once again cleaning everything and reattaching broken pieces with tape, staples, and fishing line.

“We put a bunch of lights on to hide the grime,” Greg continues. “At night, the float looked beautiful, but during the day, it looked hideous.”

The float had definitely seen better days. After just one year at the Waste Management facility, the float was moved once again, this time to the backlot at the Ocala Police Department.

“That first year, it was stored at the station without the chief’s full knowledge,” Greg says. “They knew it was there, they just didn’t know for how long. I kept putting off moving it. I consider the float to have squatter’s rights now. It’s been at the station for so long that it’s found a permanent home.”

For the record, the float is still being kept at the police department. You would think of all places, the float would be safe there, right? Wrong again.

“We had the float in a big storage area at the station,” Sue says. “That’s when a motorcycle caught fire in the building.”

“The float was covered under the station’s insurance policy,” Greg says. “I thought the fire would be our chance to finally get a new float. Well, the fire actually burned in the other direction and the float was fine. Again, we cleaned it up and used it in the parade.”

The next year, as the float was being pulled out of the station to the parade route, Greg received a frantic call from the float driver.

“He said he hit the gate on the way to the parade and that the whole side of the float ripped off,” Greg says. “This was literally like four hours before the parade. It seems like every year something bad would happen to the float and we’d be out there patching it up.”

Last year, after more than twenty years, the float finally received a much-needed facelift. But even that didn’t go off without a hitch or two.

“Kwik King was kind enough to donate $1,000 to the parade committee to help re-do the float,” Sue says. “I had this idea to create a North Pole scene with flying reindeer, a lot of trees, and presents.”

So the day after Thanksgiving, with check in hand, Sue and Greg made their way to a local department store where they proceeded to select more than 35 Christmas trees in various sizes, along with an assortment of other decorative items.

“The bill for the trees alone was almost $995,” Sue says. “I handed the girl the check and she wouldn’t take it because it was a corporate check. Greg, who was in uniform, finally had to call the bank president that issued the check and get him to approve the transaction. So here we are, the deputy chief of police and the chairman of the school board, trying to cash a check for the Christmas float and we weren’t allowed. Goes to show that no matter who you are or what you’ve accomplished, you’re not cashing a large corporate check on the day after Thanksgiving. After a little coercing, the girl finally let us cash the check and take our merchandise.”

One week before the 2004 parade, the committee had a blank slate and seven days to pull together a new-and-improved float. And they did. Sue’s vision for the North Pole turned out better than anyone could have anticipated. A crewmember took the time to paint the old silver reindeer brown, and added life-like hooves and faces. The Rudolph reindeer even has a glowing red nose. Trees twinkle with holiday lights and brightly wrapped packages surround Santa’s thrown.

“When I saw the final float, it was beautiful,” Greg says.

This year, that new float will once again travel the two-mile parade route down Silver Springs Boulevard, bringing happiness to the young and the young at heart. Until then, let’s hope for no fires and clear weather.

“Knowing the history of the float, something will probably go wrong,” Greg jokes. “But if it does, we’ll get it fixed and be ready in time for the big night.”