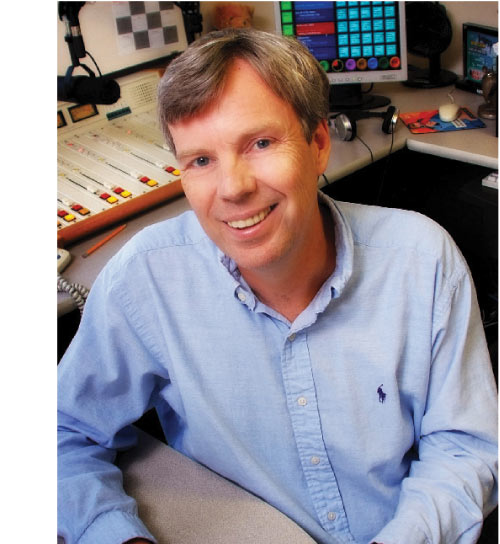 His voice is immediately recognizable—friendly and smooth. For some of us, Bill Barr is like a friend we never met. We listen to him in the mornings as we ready ourselves for work and run errands. But after 25 years on the air at Ocala’s Big 92.9, what do we really know about one of Ocala’s favorite radio personalities?

Admittedly a bit shy about socializing (he jokes that he only does it when necessary), Bill Barr recently sat down with me after signing off the air to share little-known details about his life. We spent an hour chatting about his career, baseball, and, of course, music.

How has radio changed in the last 25 years?

Radio used to be more local. In the late ‘90s, though, it was deregulated, making way for huge companies to own many stations. It’s a disappointment, really. Radio should serve the community.

Before getting into radio did you have other jobs?

I was a teenager when I worked at Wentworth by the Sea [Hotel & Spa]. I was a houseman, which basically meant I was vacuuming the hallways and picking up after the maids, but it was a blast to work in a resort atmosphere. I made like $80 a week.

How did you begin your career in broadcasting?

I went to the Northeast Broadcasting School in Boston. Today it’s part of Suffolk University and I’d have to have the whole complement of college courses. Back then it was a technical school.

Tell me about your first time on the air.

I was scared out of my wits! I had a weekend gig at WSKO in Marlboro, Massachusetts. We ran out of wire copy and I was worried that I wouldn’t be able to read the news at the top of the hour. I was shaking like a leaf, but I think I got it.

Well, you obviously have the hang of it now. What do you enjoy most about being in radio?

I like the spontaneity. Even though I’ve been here for 25 years, it always feels like it’s my first day.

What do you think of satellite radio?

I should probably feel guilty, but I listen to XM in the car. I got a free, six-month subscription and never cancelled it. I enjoy listening to The Pulse, a station that plays a lot of alternative music (see sidebar).

Your day starts while most of us are still sleeping. What time do you have to wake up in the morning?

What do you eat for breakfast?

I developed a terrible habit in high school of not eating breakfast. Someone usually brings coffee and donuts.

Do you watch a lot of television?

I’m a big fan of the HBO shows like Entourage and Curb Your Enthusiasm. I talk about reality shows on the air, but the only one I really keep up with is American Idol.

Well, we all know music is your specialty! What’s your favorite oldies song?

Probably “A Day In The Life” by the Beatles. Your editor [Dean Blinkhorn] gave me a CD of the remastered Beatles and it’s great. I also like the Eagles. It’s hard to pick a favorite.

I heard you also really like the song “Build Me Up Buttercup.”

I do like that song. I think of walking with my friend to get the first baseball cards of the season. We were going to the candy store and he had that song playing on his transistor radio.

I grew up in New Jersey as a little kid and the Mets were my team. It took a while for me, but the Red Sox settled in as my team in 1975. Any true fan can tell you about that year. I’ve been a Red Sox fan every since.

I’ve also heard that you try to travel to as many baseball stadiums as possible.

It’s my very expensive hobby (laughs). When I can, I fly to a city with a ballpark, stay overnight, go to a game, and fly back home. I’ve been to Houston, Los Angeles, Kansas City, Seattle, Atlanta, and this past summer I went to Camden Yards in Baltimore. I’ll be going to Progressive Field in Cleveland next.

Were you interested in baseball as a child, too?

Growing up, all the boys my age would play in my backyard, Barr Stadium. That’s where my baseball career started (laughs).

My favorite guest was Captain Stubing of the Love Boat [Gavin MacLeod]. He couldn’t have been more friendly and open. He was also Murray Slaughter on The Mary Tyler Moore Show—that was one of the best shows ever. Gavin was a true gentleman to everyone here at the station.

Once I was about to introduce Tony Orlando onstage, and he walked right past me. Most celebrities are smart enough to know that rudeness comes back to bite you. I also remember how Cliff Clavin [John Ratzenberger] from Cheers didn’t want to talk about Cheers—he was very dismissive. Even though that’s what he’s most known for, he only wanted to talk about his newer projects.

I also understand that you recently met Joel Whitburn, the man responsible for setting up Billboard’s chart methodology.

Yeah, I use his book every day. We went to his house near Milwaukee and ended up talking for five hours. Then he took us to his vault, [which has] every Top 40 single ever to hit the chart. It was absolutely amazing.

The greatest thing has been when someone comes up to me and quietly says, “I’ve been listening to you for years.”
Posted in Ocala Style Features