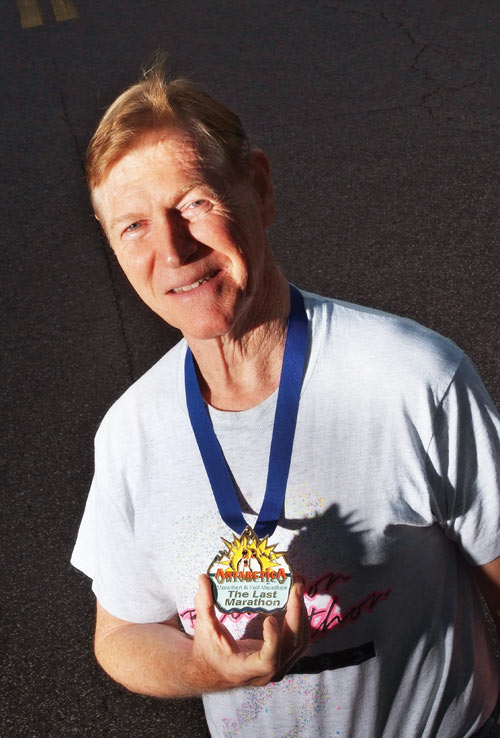 Chuck Savage has run in hundreds of marathons. Need a number? Try 258 and counting. As a member of the 50 States Marathon Club, he’s run at least one marathon in every state. Actually, it’s more like three in every state. He’s run the New York Marathon 10 times and the Boston Marathon four times. Savage has also logged 26.2 milers in six countries and on four continents. Outside of the United States, his running passport has been stamped in Canada, Brazil, England, Poland, and Sweden. Definitely making the highlight reel would be Antarctica in 2009 where he even spent a little quality time with some penguins.

In three decades of marathon running, Savage’s odometer has ticked beyond the 6,800-mile mark. He’s traveled far and wide, laced up his running shoes in exotic places, and amassed an amazing, eclectic collection of race medals. But even with all those accomplishments, there’s still one race that Savage hasn’t run—his own hometown’s marathon.

This fact seems all the more surprising considering that Savage founded the Ocala Marathon in 1998 and was its race director for nine years. This year’s edition, which also includes a half-marathon, a 5K (3.1 miles), and the LifeSouth Kid’s Marathon, is set for January 30-31. And on that Sunday, Savage will be at the starting line for the very first time.

“When you’re the race director, there’s just too much to do,” says Savage, who at 71 is lean, fit, and looks at least a decade younger. “There are just too many details to take care of right up until and after the race. There were times that I didn’t even sleep before a race, making sure everything got done. Running it was just not possible.”

“The race has become an important part of Ocala thanks to Chuck,” says Moling. “We decided it was long overdue to officially invite him to run. We’re delighted he accepted our invitation.” 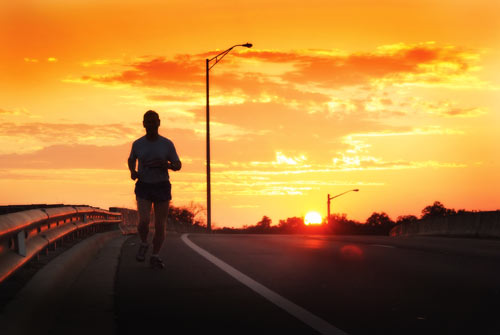 Savage began running while in the Air Force, but didn’t run a marathon until 1979 when he was 40. He describes that Trail’s End Marathon off the Oregon coast “as one of the most terrifying experiences of my life.” Savage had to deal with “50‑mph gale‑force winds” and freezing rain that “felt like nails.” Challenged, but not defeated, Savage finished the race.

He’s been putting one foot in front of the other ever since.

Settling back in Ocala in 1980 with wife Carol and daughter Liesl, Savage established his still-operating architect design office. But he kept running marathons, crisscrossing the country and traveling abroad.

A chat with Savage about running is like flipping a remote control through the health, travel, and history channels all at once. While extolling the health benefits of running, he’ll jump up and grab one of his oversized, cloth-bound atlases. A quick flip of the pages to find the right country, he points out the precise location and route, followed by a history lesson on the race and the area. For example, Oregon’s Trail’s End Marathon is so named because it was the end point of the Lewis and Clark Expedition. The Boston Marathon, the oldest in the country, celebrates the Revolutionary War battles of Lexington and Concord and the course parallels the route the British soldiers took.

“Thanks to running, I’ve gone to amazing places and had extraordinary experiences,” says Savage, smiling. “I’ve made wonderful friends because there’s a bond among runners. Running marathons changed my life.”

The impact of marathon running in his own life prompted Savage to bring the experience to Ocala. But he knew he needed a hook to make the race appealing to marathoners from outside the area.

“Many marathon courses go through downtown areas of well-known cities like New York, Boston, and Chicago. Others have stunning coastlines like Big Sur or Oregon,” says Savage. “Obviously, that wasn’t going to work for us, so I started thinking of what we had that was unique to this area. Our scenic horse country became our signature.”

From that very first race, Savage had the Ocala Marathon certified as a Boston Marathon-qualifying race and this has continued through to the present. Savage passed the race director’s baton after the 2006 event, but the time never seemed right for him to actually run in the Ocala Marathon until this year’s official invitation.

Savage likes to log around 50 miles a week when he’s aiming for a marathon. He’s a morning runner—a very early morning runner—out between 5am and 6am most days with one of three running groups. Surprisingly, he only wears out two pairs of running shoes a year. Savage’s short-term goal is to post a finishing time of 4 hours and 30 minutes to again qualify for the Boston Marathon in his age group; also on the agenda is to run 300 marathons by the time he’s 75.

“I’m not an elite runner by any means,” says Savage, who recently became a vegetarian. “Beyond the health benefits, running for me is a social event. You get to see people as they really are. There’s just something very honest about running.”