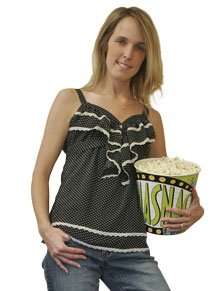 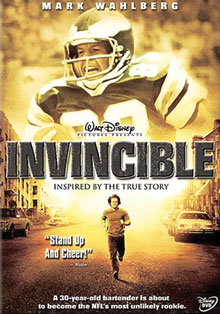 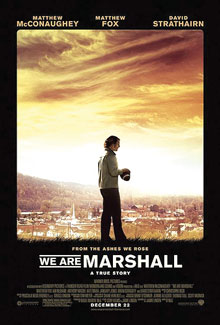 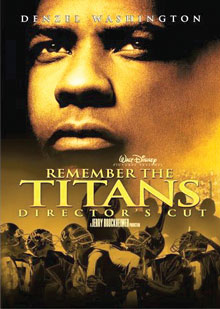 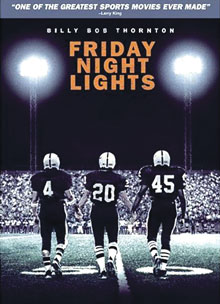 As a native of Milwaukee, it’s no surprise that I—along with my entire family—am a huge Green Bay Packers fan. It doesn’t matter whether they have a winning season or not, Sundays are sacred at my house. And any new season with Brett Favre still at quarterback is a good one in my book! So in honor of the mid-way point in the 2007 NFL season, I’ve decided to reminisce about some of my favorite football-themed flicks.

INVINCIBLE In my humble opinion, Mark Wahlberg is a far better actor than he ever was a rapper. Remember Marky Mark and the Funky Bunch? I bet he wishes you didn’t. In this film, Wahlberg is realistic as Vince Papale, an average guy who attends an open tryout for the Eagles and—amazingly enough—makes the team. For those who think the story is too unbelievable to happen, make sure to watch the extra feature in which Papale himself recounts his own version of his fairytale life story.

WE ARE MARSHALL Another true and inspiring story. We Are Marshall relives the tragic 1970 airplane crash that took the lives of 75 members of the Marshall University football team and coaching staff and Jack Lengyel’s (Matthew McConaughey) determination to rebuild the team. The movie focuses on this so heavily that the football scenes aren’t all that spectacular. But, more than just football, We Are Marshall is about the human spirit.

THE REPLACEMENTS This is the football movie for those of you who don’t necessarily enjoy football. The writing is sharp and quick-witted and the acting is first-rate for a comedy flick. Unlike many of the other movies I’ve recommended, this is a lighthearted comedy about what happens when average football players have the opportunity to step up during a players’ strike and make a difference.

REMEMBER THE TITANS Yes, we’ve seen this movie before—just with a different title and different actors. Despite that, though, this movie is still enjoyable. I love Denzel Washington’s portrayal of the head football coach who has to endure drama and criticism both on and off the field. If I could find a downside to this movie, it would be the annoying performance by then pre-teen actress Hayden Panettiere (NBC’s Heroes). She plays the part of the know-it-all little girl all too well.

FRIDAY NIGHT LIGHTS Many are probably unaware that Friday Night Lights is based on a book of the same name by H.G. Bissinger that chronicles the efforts of Gary Gaines (Billy Bob Thornton), the coach of a local football team in small-town Texas. Thornton is believable as the gritty high school coach who lets his players know who’s boss. Another plus for this movie? Every time it starts to turn into the “typical” sports drama, it changes course and surprises you.

Style Editors Dean Blinkhorn, Karin Fabry, and Amy Mangan have many opinions on music, movies, and books, respectively. This special rotating column will highlight a different editor and a different topic each month. Agree? Disagree? Have something to add? Drop us a line at mediacenter@lakeandsumterstyle.com or mediacenter@ocalastyle.com and we’ll print the best responses in the next issue. Next up? Dean offers his annual Yuletide music mix.