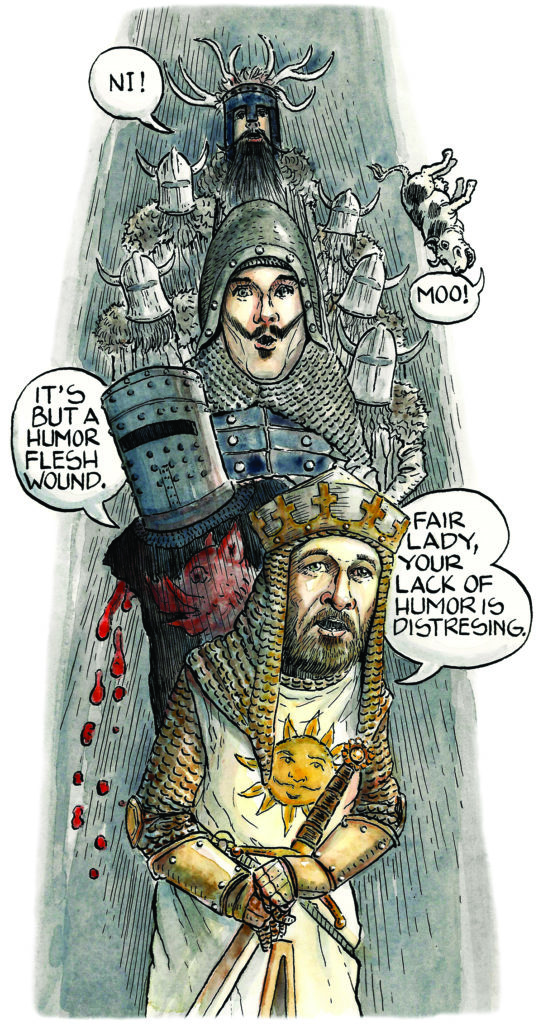 Mom’s Bad TV Mojo is a phenomenon that means every TV show a father picks suddenly goes south when a mother walks in the room.

No matter how kid-friendly the show I picked was, it would take an inappropriate turn when my wife Amy (the particular mom in this scenario) appeared.

It could be Hannah Montana, and the second Amy would walk in, Hannah would tire of Jackson’s sass and pull out a hatchet.

So it went with the animated Gravity Falls.

The girls were 9 and 12 when this offbeat comedy premiered on the Disney Channel. It was darker and sillier than most Disney fare, but it also was charming and fun. The girls and I were spellbound. Then Amy walked into the room just as a cartoon gnome started barfing rainbows…lots and lots of rainbows.

It was a funny gag on its own, but the juxtaposition of my wife’s horrified face and the continual spew of sunshiny vomit made the girls and I laugh harder than we have ever laughed. My spleen ached.

Make no mistake, Amy, has a wonderful sense of humor. We laugh often, and she can crack me up better than anyone. But, I learned after we were married, she does not find Monty Python funny.

Monty Python, of course, is the wildly silly 1970s British comedy troupe. Their masterpiece is the movie Monty Python and the Holy Grail.

This King Arthur satire includes coconut horses, a newt that “got better,” sacred shrubbery, a bloodthirsty bunny and French knights who—say it with me, guys—“fart in your general direction.”

I sincerely do not know how anyone could NOT laugh at Holy Grail. What chemistry blocks the Monty Python gland? Gender? Genetics?

Or is it us? Do Python fans carry a defective chromosome that makes us laugh at bleeding, limbless knights?

One evening, I asked our 17-year-old daughter Caroline to watch Holy Grail with me. If she did not find it funny, she could leave after 30 minutes. She reluctantly agreed.

I was almost hoping Caroline, with her barfing-rainbow sense of humor, would not find Holy Grail funny. I could chalk it up to male/female biology and move on.

But Caroline watched the whole thing and laughed hard at the killer bunny. In other words, a teen girl who loves TikTok and Taylor Swift enjoyed a 1975 comedy with her 50-something dad.

I stopped worrying about cultural biology and savored the moment. Then, shortly after the film, I overheard our brilliant teen daughter utter, in a wild French accent, “I wave my private parts at your aunties.”

I wanted to hug her.

The final lessons: 1.) Amy is the more sensible parent. 2.) Silliness is hereditary. 3.) African swallows can carry coconuts. 4.) That will always be funny. 5.) Ni!