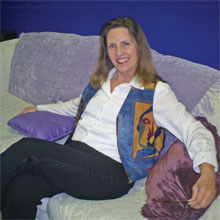 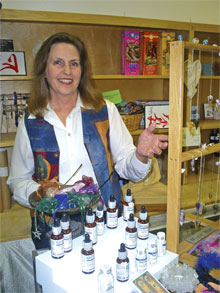 Mary Rose Gray was lead-ing her life, work-ing as a registered nurse in the operating room at Waterman Hospital in Eustis and singing lead roles in musicals at Lake County venues. Of her 70 roles, one of her more memorable was that of Reno Sweeney, a club headliner who became an evangelist, in Anything Goes.

“Little did I know that this role would turn into my real life experiences,” she says.

And that it did.

She had gained skills as a private-duty nurse in Ohio, and then worked in intensive care, coronary care units, and the operating room at Waterman in Eustis. Toward the end of her 17-year nursing career, she found that she was becoming “burned out.”

To cope with the stress, Mary Rose, 58, began practicing meditation.

For the next three months, Mary Rose took time to mediate each morning before work.

During one state of meditation, she says, “I was thinking God and things I wanted in my life. All of a sudden, a huge shaft of white light came from above. It went through the top [of] my head [and] through my body. It was almost like the light of God infused me with purpose and direction.”

Shortly thereafter, one of her theater friends died. On several occasions, Mary Rose said he came to her during meditation. Every time he appeared he showed her a car and then inside the car underneath the steering mechanism.

She said each time he wanted her to call his wife. Eventually, she looked up his wife’s phone number and called her to tell her about the problem with a vehicle that was either hers or one that was around her.

Mary Ann Hall of Bushnell was that woman.

“It had been quite a few years since I saw her,” Mary Ann says of the out-of-the-blue phone call she received back then. “I listened. I wasn’t going to laugh at her. You never know.”

At that time, Mary Ann was engaged to her future second husband. She said he checked out the vehicles.

“It was weird because the problem was with his [Mary Rose’s fiance’s] vehicle,” she says. “He was able to fix it. It was something in the steering. There was something that could have caused potential problems.”

To this day, Mary Ann, who hasn’t spoken with Mary Rose since then, believes it to be a coincidence.

Mary Rose knew something very special was happening to her, though. “By this time, in the operating room I became more and more aware,” Mary Rose says. “I experienced gifts of knowing through spirit.”

Mary Rose decided she wanted more interaction with the patients, so she became a massage therapist. Mary Rose says as soon as she put her hands on the client, a “flood of pictures began.”

“Pictures started coming in my mind’s eye,” she says. “I was clairvoyant. They [the gifts] all came with making that stronger connection with God.”

Mary Rose, who worked as an instructor for five years at the massage institute, teaching anatomy, physiology and massage, heard about Cassadaga Spiritualist Camp in Volusia County, and decided it was the path she needed to take. She studied there for 10 years.

In those 10 years, Mary Rose honed her skills through all levels of development including metaphysics, meditation, and spiritual communication. She also studied at Body, Mind, Spirit in Boston, Inner Light Center in Sedona, Arizona, and Arthur Findlay College in England.

In 2001, she became a certified medium and later that year she became a reverend, both through Cassadaga. That same year, Mary Rose co-founded Soul-ution Center in Mount Dora and is now the director.

Gray also teaches Reiki, an ancient form of divinely guided, hands on healing at the center.

The Rev. Jerry Frederich, who was one of Gray’s teachers, can’t say enough about his former student.

“She did very well with all of it,” says Rev. Frederich. “She helps people find a higher self. I’m very proud of her.”

“When I teach, it is evident that everyone had this gift when they were born,” Mary Rose says. “We are all connected this way. We leave it behind for some reason.”

She admits she is aware of the naysayers.

“That’s perfectly fine,” Mary Rose says. “It doesn’t change my information or my belief because mine is experiential. That’s what I love about spiritualism. It’s proof through the information that I receive for the clients. It’s on target. You can’t make this stuff up.”

Mary Rose says that spiritualism, which is the science, philosophy, and religion of the continuation of life, is based on communication with those who live in the spirit world. It has been around for a long time.

“Are hunches, coincidences, and deja-vu just that?” she asks. “It’s not just the luck of the moment. Our challenge is to listen and get it.”

Every time you turn on the television, it seems some character is having a paranormal experience. With shows like Medium, or Ghost Whisperer, Hollywood definitely has tapped into an interest that has grown rapidly over the last 10 years. According to a 2001 Gallup survey of Americans:

50%
believe in psychic phenomena, such as ESP and psychic healing

36%
believe in telepathy, the ability to communicate by thoughts

33%
believe in clairvoyance, the ability to see things beyond the range of normal human vision

25%
believe that some people can communicate with the dead