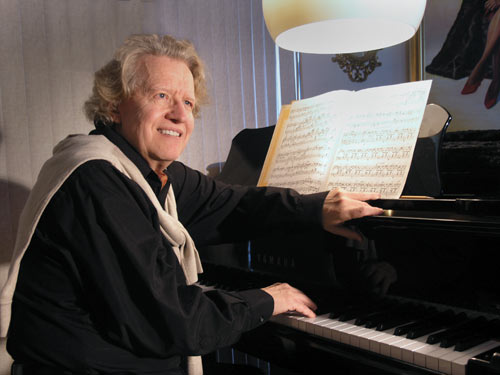 Florida Lakes Symphony Orchestra—the Mount Dora-based professional orchestra founded by acclaimed composer/pianist Guy Saint-Clair and his wife, Audrey—is now in its fifth year and growing in popularity. Hundreds of guests regularly turn out for its performances, including 750 at last year’s holiday concert. Lake & Sumter Style recently sat down with Saint-Clair at his home to discuss his orchestra’s appeal, the art of composing music, and how one note changed his life.

What’s your first memory of music?

I must have been three, and I heard a harmonica—just one note played—and it made me feel like heaven. I begged my parents, “I want to do that, too.”

Where did you hear this note played?

I think I was at the park with my parents. Just one note, not even a melody, but to me it was the most beautiful sound in the world.

This started your love of music?

Anything I could get a hold of—a piano, any instrument—I would immediately organize the sound of them as if I already knew what to do.

Was your family musically inclined?

My father was an engineer, but my mother came from a family where music was always there. Her sister was a concert pianist.

Were they happy you wanted to pursue music?

Oh, of course! My mother was my manager. She was everything for me.

Where were you born and raised?

Strasbourg, France. My mother was Czech and my father was Austrian.

You had your first solo performance at age five…

Yes, they found out that I had a gift. It was natural to me. While others played soccer in the street, I would do music. That was the only thing that I was interested in.

Were you comfortable on stage at such a young age?

Oh, yes. No stage fright. I was in my element.

Why did you decide on the piano? You played other instruments, too.

I could play the violin, it’s true, but it was a fascination [with] those little black-and-white keys. It was always beautiful to me.

Did you compose then, too?

Yes, I organized my own music even before I could read and write. I needed to know, “How do you get this note that I played?” As soon as I was told the name, I knew it forever.

How do you explain that kind of talent?

People are genetically programmed in art or mathematics, in anything. I was in music. Actually, music is linked with mathematics. That’s why I was always good with numbers. I liked the organization of sound. I found it very logical, the musical system.

But you would agree that even for the naturally talented, formal training is important.

You know, the whole life is a training. Every great composer knew everything as a child and still they went through all the studies because that gives them discipline. I had a European training. They go so deep into everything, so it takes a bit longer, but this is what the French are known for.

Would you say that you are a perfectionist?

I was wondering about all these model ships…

Everyone in my family was either a ship builder or an officer, on a ship in some way, so I had this in my blood. And I just liked the shape—the sails, the outline. I like things that have shape to them.

Is that how you visualize the music when you’re composing?

Well, yes. When I compose for the orchestra, it is three-dimensional because of the timbres—the brass, the woodwinds, the strings. They have a sort of shape. It’s invisible, but yes.

Are you ever daunted before you start on a piece?

When it’s done, you wonder how it was possible to write it, and even before. But during, it just pours out and you cannot explain why. It is incredible. Afterward you don’t even imagine that you did it.

Each and every note on your sheets is perfect.

Yes, when it’s final, I do it beautifully with ink. It tends to look appealing visually.

Do you require silence when you work?

You know, creative artists are very solitary. So I would be totally alone, except for Audrey, of course, and not be interrupted by seeing other people or anything that’s distracting. It’s a focus. You have a block of marble and you suddenly have to make something out of it. It’s raw and you have to shape it into the sound.

What brought you to Mount Dora?

A fluke! We were in London before. Audrey loved Disney, so we came here. We didn’t know that we would one day start an orchestra, but we could only start it here. You cannot live in Boston, Chicago, or New York and have a new orchestra. You don’t need one. And so we understand afterward why we came here—this was meant for us even if we didn’t know it.

What do you consider your greatest achievement?