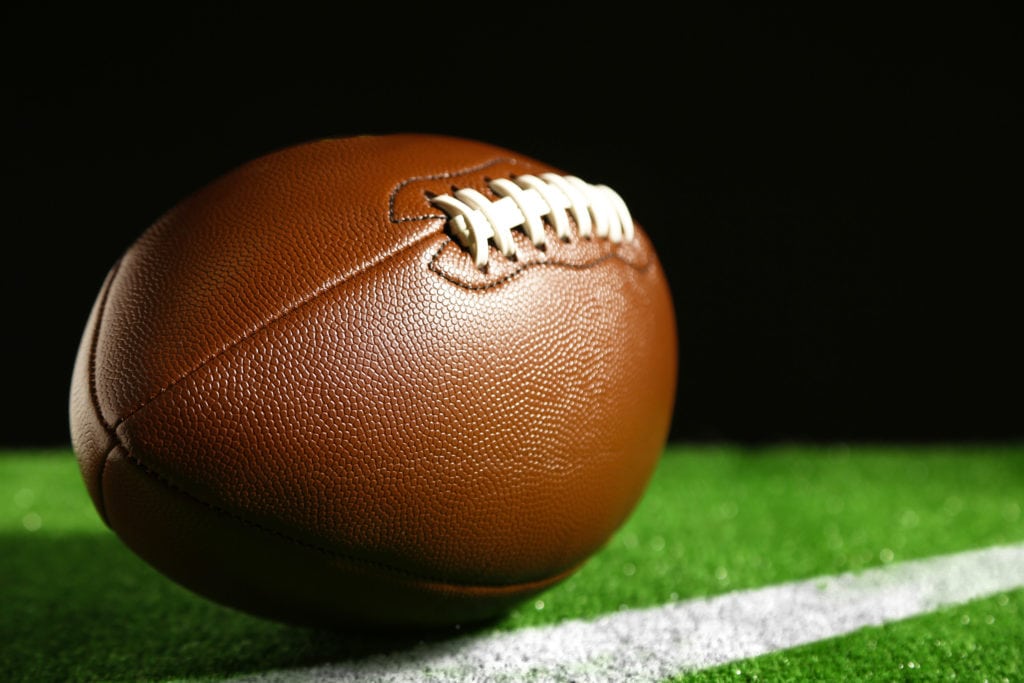 Into town they come riding, adored and even worshipped by the masses who toss laurels and bouquets at their feet. It is they, believed to be the masters possessing the keys to deliverance, who enjoy that rarified air breathed solely by exalted liberators.

But in the end, what matters is not how they enter town but how they leave.

For their time perched upon the pedestal is fleeting, and in failing to deliver on their grand promises, the road upon which they leave will be nothing more than a rail.

They are not superheroes, though the adulation poured upon them may belie this fact—they are merely football coaches, hired guns to lead their teams to the promised land.

Just as Glenn Frey and the Eagles sang, everybody loves the new kid in town—there are “great expectations; everybody’s watching you.”

And just as the song states, “After a while you’re looking the other way,” and all that adulation turns to scorn, derision and an eventual mob bent on stringing up the former new kid.

Just ask Jim McElwain, the new kid in Gainesville in 2015. As the “quarterback whisperer,” McElwain took over the Florida Gators to turn around an anemic offense and bring that team back to its glory days of the previous two decades. Despite two straight appearances in the SEC Championship, when things went sour in 2017, the love for McElwain turned to disdain and he would not finish the year.

Just ask Jimbo Fisher, the new kid in Tallahassee hired in 2010 to replace the legend Bobby Bowden. All Fisher did was bring the Seminoles back to national prominence and win the school’s third national championship in 2013. Then in 2017 with his star quarterback injured for the year, a mediocre campaign had some fans and boosters moaning. Before the 2017 season was complete, Fisher skipped town for more money and perhaps more love in College Station, Texas.

In 2018, new kids come to Gainesville and Tallahassee carrying with them high expectations and visions of grandeur. They are Dan Mullen and Willie Taggart, who along with Josh Heupel at the University of Central Florida take over at UF and FSU, respectively. This is the first time since 1960 that both the Gators and Seminoles will simultaneously break in new head coaches. 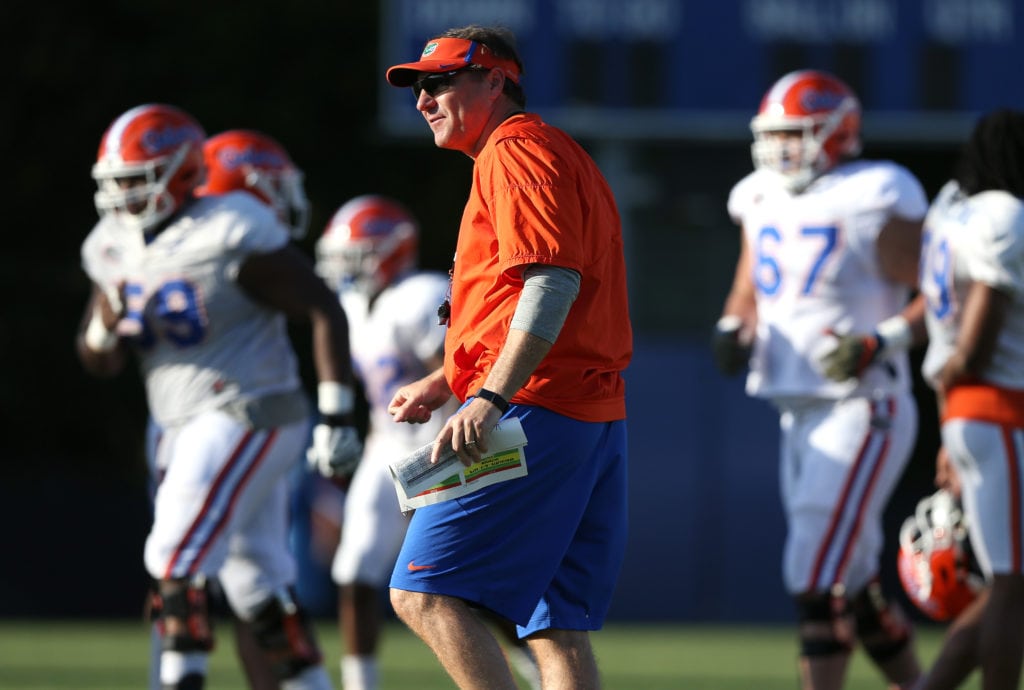 Not since the Army of the Potomac has there been as much transition in leadership of a program. After Steve Spurrier left Gainesville following the 2001 season, the Gators have had four different head coaches with Mullen now bringing that number to five.

In hiring Mullen, UF is apparently trying to bring back the halcyon days of the Urban Meyer era, which claimed two national championships. But since Meyer left for Columbus, Ohio, to cure his heart condition away from the stresses of SEC football, successive coaches Will Muschamp and McElwain found themselves tarred and feathered and shown a rude exit.

Mullen, offensive coordinator at UF during the 2006 and 2008 titles, comes over from Mississippi State, where as nine years the head coach, he turned a program mired in perpetual mediocrity to one of relative significance in a division dominated by Alabama, Auburn and LSU.

Mullen remembers the expectations from his days in the Meyer regime and knows they have not changed at Florida despite a decade of sub-standard performance.

“I remember it was a rough walk to my car if we didn’t score 40 points,” Mullen said, recalling those days when the likes of Tim Tebow and Percy Harvin made life easy for an offensive coordinator. “We’re here to score some points. I know how important offense is being here. I’ll be honest with you—I don’t know if anyone likes scoring points more than me.”

Succeeding means Mullen must develop a quarterback at UF and hope that his best offensive weapons are not suspended two weeks before the start of the season, which happened to McElwain in 2017. Mullen enjoyed Dak Prescott and Nick Fitzgerald toward the end of his MSU tenure, and the hope among Gator faithful is that another Prescott or Tebow will fall into their laps very soon.

For that to happen, it will take some Oscar Goldman work on the current roster of veteran QBs, which includes Feleipe Franks, the redshirt sophomore who started much of 2017 but did not produce anywhere close to the level of expectation, and fellow redshirt sophomore Kyle Trask, who has the size of a Mullen prototype QB. Both will be challenged for the job by true freshman Emory Jones, the big-time recruit from Georgia.

“It’s the most important position on the field,” Mullen said. “There are some pretty talented quarterbacks on campus, and we just signed a pretty talented one. The flexibility within the offense to build around the strength of the quarterback is really important.

Whoever the quarterback, he’ll have talented veteran receivers in junior Tyrie Cleveland and Ole Miss transfer Van Jefferson. He’ll also have perhaps the deepest backfield in the SEC with the return of Jordan Scarlett, who missed all of 2017 due to suspension, sophomore speedster Malik Davis and junior bruiser Lamical Perine.

The defense has carried Florida since Meyer’s departure, but Mullen hopes that will no longer have to be the case. The time has come for the offense to strike fear in opponents the way Tebow and Harvin once did.

Mullen is just what the doctor ordered to bring the best out of the talent that exists at Florida. Five starters return on the offensive line, including Martez Ivey, and if that line comes through, the Gators will push Georgia in the East division. No one expects a division championship, but doubling last year’s win total of four should be easily attainable and a return trip to the SEC Championship within reach.

As good as Mullen was at Mississippi State, he still lost most of the games played against ranked opponents. The offensive line has not lived up to its billing and may only be average at best. Mullen does not have his quarterback yet, and the defense is not likely to return to the form it was in the Muschamp era, so the SEC schedule could make 2018 another ugly campaign. 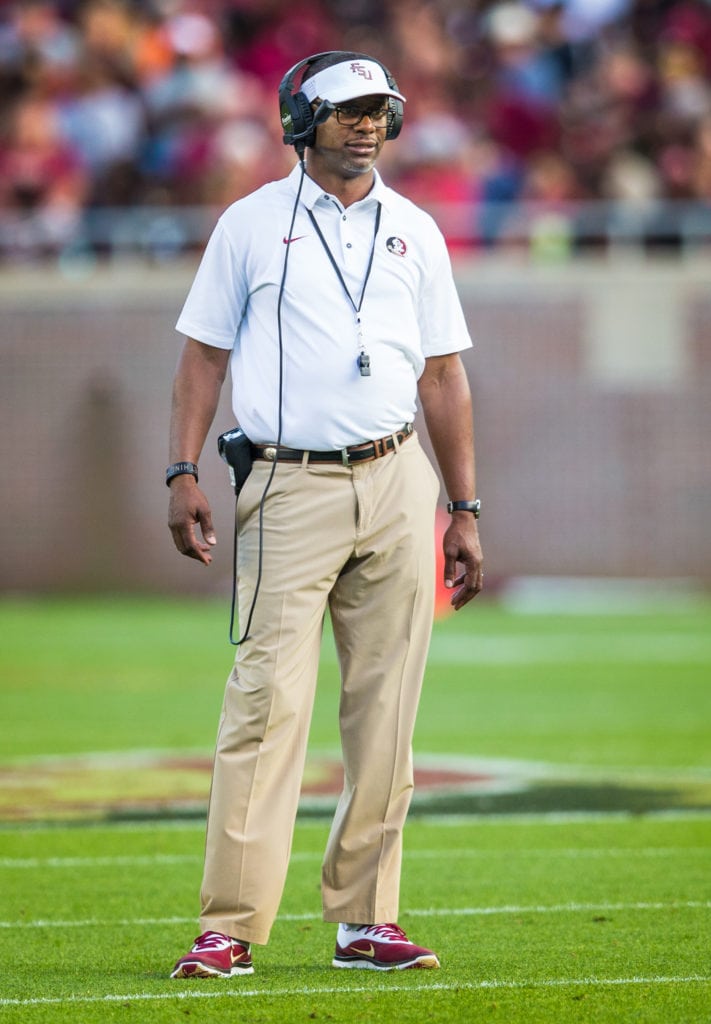 No matter how excited Seminoles fans are that Willie Taggart is the new head coach, no one is more excited than Taggart himself.

Having grown up in Palmetto, just north of Bradenton, Taggart has bled garnet and gold his whole life—save a few brief seasons as head coach for the University of South Florida. Even his one year in Eugene, Oregon, Taggart still bled FSU colors and made his move to Tallahassee before the ink had completely dried on his University of Oregon contract.

“Growing up in my household, if you weren’t a ‘Noles fan you probably weren’t staying in that house,” Taggart said. “It goes to show what it meant to me and my family.”

Despite FSU’s lethargic 7-6 season in 2017, Taggart enters a situation tailor-made for a championship run. The roster is full of recruits that were all part of top-ranked classes, so Fisher did not leave a bare cupboard. Star quarterback Deondre Francois returns after his opening-day injury last season, and he’ll battle for the position with James Blackman, the sophomore who was thrust prematurely into the limelight in 2017 but developed nicely.

Whoever wins the starting quarterback job will have the pleasure of running Taggart’s “Gulf Coast” offense, a version of the spread option attack in which the quarterback is also a running back. He perfected the offense during his tenure at South Florida, which went 10-2 in Taggart’s final season and enjoyed two games in which the team rushed for over 400 yards.

“Lethal simplicity” is how Taggart describes the Gulf Coast offense.

“We want to score fast and often but be really simple when it comes to teaching our players, not confusing them on what they need to do but allow them to play football and play fast.”

“This isn’t a re-build; it’s a re-alignment,” Taggart said. “It’s exciting knowing you have some really good players.

“I like to see a lot of explosive plays—I’m not one of those guys who likes those long drives; I like to score fast.”

Taggart’s offensive style will wreak havoc in the Atlantic Coast Conference, and the talent pool should be able to execute the plan. The run option for the quarterback should make things easier on what was an embattled offensive line in 2017, and the talent on defense is still deep enough for FSU to re-enter the national championship conversation.

Taggart is a good salesman who talks a great game. His four seasons at USF still yielded a losing record with one outstanding season among them, and his one season at Oregon was average at best. Defensive coordinators are figuring out the West Coast offense, so its days are numbered in Tallahassee. 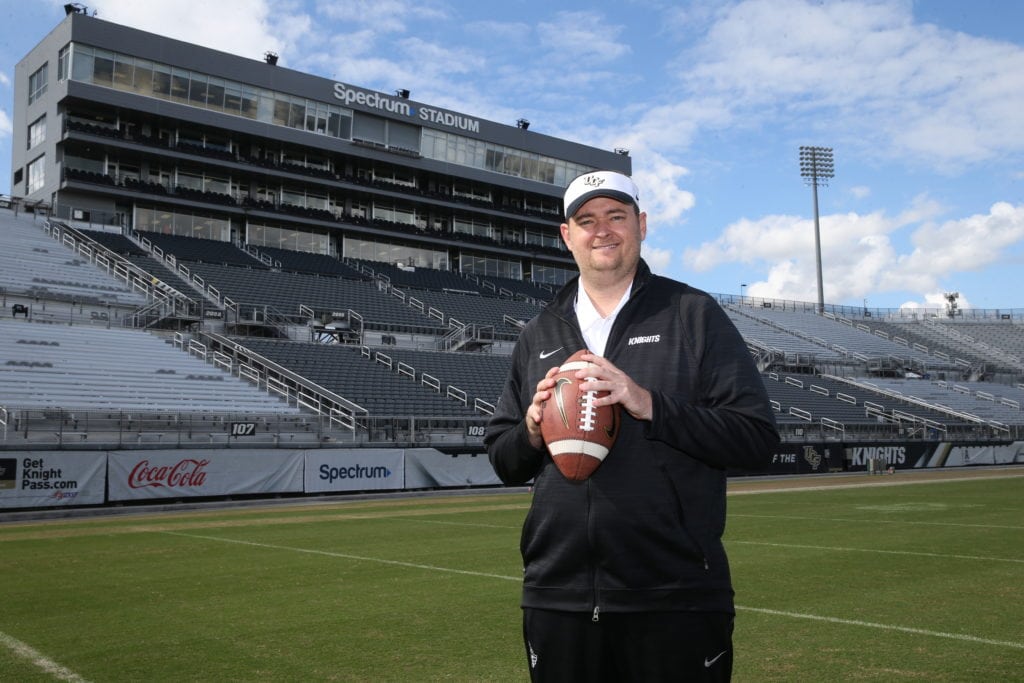 Coming off a season in which the program proclaimed itself national champions, there seems to be only one way to go for the UCF Knights, and it isn’t “to infinity and beyond.”

With Scott Frost returning home to Lincoln, Nebraska, in order to save the Cornhuskers, UCF turns to another young up-and-comer who was a star quarterback from a Big 12 school. After quarterbacking the Oklahoma Sooners to a national title in 2000, Heupel has been honing his offensive scheme as an assistant at various schools. His most recent stint as offensive coordinator for Missouri resulted in one of last year’s most remarkable turnarounds.

A team seemed headed for another losing campaign rebounded from a five-game losing streak with a six-game stretch in which the Tigers averaged over 51 points per game and earned a postseason bowl berth.

Putting up such numbers would be just more of the same at UCF, which went undefeated in 2017. Fortunately for Heupel, most of the weapons from last year’s Knights are back with the team in 2018.

The only questions regarding the 2018 Knights point in the direction of the defense, which loses its two key components in linebacker Shaquem Griffin and cornerback Mike Hughes. Former UF defensive coordinator Randy Shannon is coming in to help minimize the damage, but Heupel knows the goal is to win shootouts.

“We’re a no-huddle, fast-paced offense,” Heupel said. “I think it’s an exciting brand of football, but I also think you dictate to the defense what’s going to happen instead of being reactionary.”

Heupel is built in the same mold as Frost, and the transition should be seamless. With Milton back at QB along with returning running back Adrian Killins, Jr. and receiver Tre’Quan Smith, the offense will remain just as potent. Another conference title is certainly in the offing, and another undefeated season is also attainable.

Frost’s departure will send the Knights backward despite the players returning on offense. Learning a new system will cause some transition issues on offense, and the defense without its top players from 2017 will weaken and keep UCF from outscoring opponents. The AAC is loaded with fast-paced offenses and will keep UCF from another title.