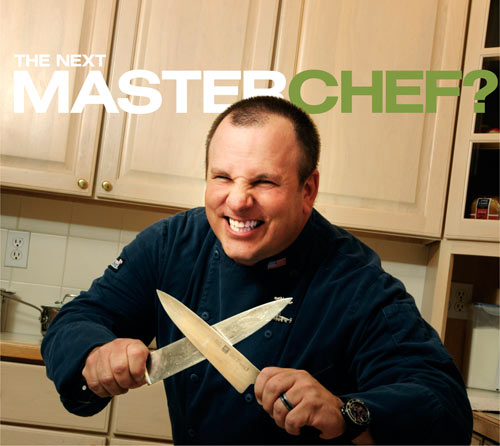 Christopher Gardner knows about pressure—the kind that comes from working and sweating in cramped kitchen quarters, from having 100 hungry Navy men waiting on you for their next meal, from feeling the weight of an entire ocean pressing in on the massive nuclear submarine you call home. Yes, it’s safe to say that Christopher can handle the heat, and now the cook is hoping his 20 years as a Navy submariner will make him an ideal contestant on MasterChef, a competitive cooking show starring salty British chef Gordon Ramsay.

“I think Ramsay would appreciate what the cooks on a submarine have to do,” says Christopher, who traveled to Orlando late last November for an in-person casting call and received a call-back. “It really is a one-man show in that kitchen to feed 100 guys every six hours, cooking every part of the meal.”

If all goes according to plan, the 41-year-old will be able to display those unique stress management skills on national television. He says there was never any doubt that he wanted to make his living working in the galley of a U.S. Navy submarine.

“I knew since my sophomore year in high school,” says the Long Island, New York, native who moved to Ocala two years ago. “I remember heading to New London, Connecticut, for a wrestling match and seeing the submarines being built at Electric Boat on the Thames River. I was so interested.”

Soon thereafter, the 10th-grader secured a tour of the U.S.S. Houston. The father of one of his high school friends was the submarine’s Chief of the Boat (COB) and invited him onboard. Christopher was hooked.

“When I saw the cook in the galley making a family-style meal for 100 men, it blew my mind,” he recalls. “I went to the recruiter’s office and told the guy exactly what I wanted to be.”

He enlisted the July 4th weekend of 1989. By March 1990, he was deployed aboard the U.S.S. Gato. Though he personally relished the work, life aboard a submarine was far from glamorous. At his longest stretch, Christopher was under the surface for 108 days—that’s over three months without seeing sunlight—and away from home for 296 days. When he adds up all his under-the-ocean time over 20 years, it comes out to about seven years. A true submariner, Christopher recalls these figures as readily as if they were his phone number.

“A typical dinner aboard a sub might be catfish jambalaya, black-eyed peas and rice, green bean casserole, cornbread, cream of mushroom soup, a toasted garlic baguette, a garden salad and Dutch apple pie,” Christopher recites from memory. “The sailors just got off watch for six hours down in sonar—ear phones on, watching a screen. They want to come down and have a good meal.”

Some days, they were a tough crowd, but Christopher welcomed all of the feedback—good, bad or otherwise.

“Here’s what you need to know about being a chef,” he explains. “Eighty-five percent is cleaning, five percent is cooking and the other 10 percent is learning how to handle compliments and complaints. It’s all equally important because my ultimate goal is to make somebody smile when they’re eating my food.

Christopher’s passion for cooking seems hereditary. In addition to working as a Navy cook aboard an aircraft carrier, Christopher’s father was a volunteer cook for the local fire department and the “recipe guru for just about any food-related event held in town.” His mother also worked as a waitress “down on the beach at the place where you got a burger and hot dog or at the bagel shop, you name it. She was also an incredible cook.”

“We had a homemade dinner every night,” Christopher adds affectionately. “I’m lucky if I get to cook once a week for my kids.”

Of course, Christopher does have quite a busy day job. Since October 2009, he’s worked as the nutrition coordinator for Marion County Senior Services, heading up three of the organization’s foods programs—congregate meals at 12 locations throughout the county; Meals on Wheels, which has 26 delivery routes county-wide; and Pets on Wheels, which provides pet food to dozens of pet dogs and cats in the area. Christopher loves the work, and it shows.

“It’s not just a job for him,” says Sarah Stroh, executive director of MCSS. “He believes in our mission and is very passionate about what he does. That kind of enthusiasm is infectious, and since he’s been here, Christopher has ramped up everything and everyone. The seniors love him.”

At home in his own kitchen, Christopher, pardon the pun, runs a tight ship. The retired military man, not surprisingly, keeps his kitchen neat and orderly.

“To me, a meal isn’t done until the whole kitchen is clean. Then you can relax,” he explains. “You can always tell how good a restaurant is by looking at the floor when you walk in. If they can concentrate on the corners, they can definitely concentrate on the food. So leaving a dirty kitchen behind is not my style.”

If the sentiment rings familiar to fans of Gordon Ramsay, that’s to be expected. The celebrity chef’s take-no-prisoners approach with fellow chefs—down to their cleanliness in the kitchen—is right up Christopher’s alley.

“I love his style,” Christopher says. “He can walk in somewhere and immediately know about the place by looking at the way people carry themselves or the way their refrigerator looks. His style of leadership is right on point. I think we’re on the same page.”

Christopher jokingly admits that while he doesn’t know that he’d win the show, he’s certain he would “last the longest” under the famous Ramsay pressure. As of press time, he was still awaiting word on whether he made the cut for another round. He has already been selected as one of five from his group of 30.

“I don’t know why they wouldn’t pick me,” he says with a booming laugh. “What can I say? I’m competitive. I think Chef Ramsay would appreciate that.”

Visit the “Christopher Gardner For MasterChef Season 2” page on Facebook to view photos and videos of Christopher in action.