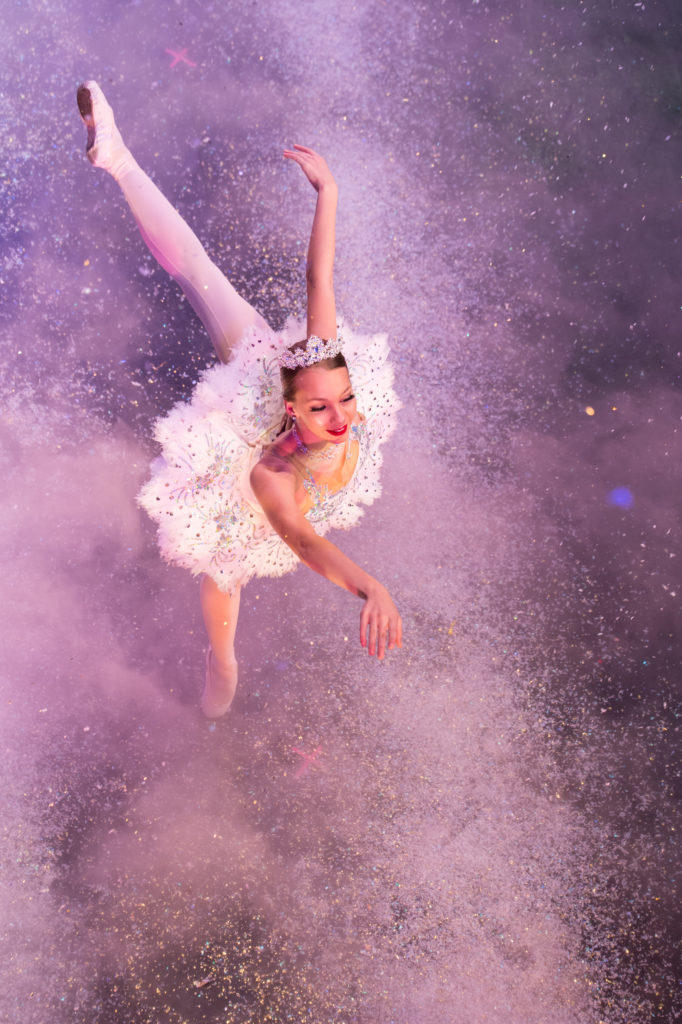 Thousands of Marion County residents have been wowed by The Nutcracker performed for the last 38 years by Marion Ballet Theatre at the Ocala Civic Theatre. But it’s what you don’t see, behind the curtain, in the wings, before the dancers even make it to rehearsals, that’s most impressive.

It’s a Saturday afternoon in early August. While most families are just finishing their last family vacation and thinking about starting school, my family and I are thinking about toy soldiers and sugary Polichinelles. For us and the several other dozen mom-and-daughter duos at auditions for Marion Ballet Theatre’s The Nutcracker, we’re on a collision course with December.

I’m not the typical “dance mom” like you see on the television show. (I’d say most MBT moms aren’t.) Sewing moms are a hot commodity around the dance studio. Unfortunately, I don’t sew costumes (or even buttons, for that matter), so fitting in with the other moms proved difficult as a socially awkward introvert. We muddled our way through the first two years, and thankfully, I’ve met some other dance moms along the way who can sew costumes who have my back. (This one’s for Janet, who I’ll forever be indebted to for sewing zippers on all my daughter’s costumes.) My daughter, Delaney, joined MBT after I started taking her to see The Nutcracker when she was about 2 years old. Even then she told me that she wanted to dance like the girls on stage, so joining MBT just felt inevitable.

Little did I know when we first joined the amount of work and hours these girls, even the youngest ones, (and their parents) put into the show. In addition to spending every Saturday, August through December, rehearsing for the show, each dancer is required to maintain their regular ballet and dance class schedule 11 months out of the year. Many of the older dancers spend 10 or more hours a week at the studio, not including Nutcracker rehearsals. My daughter is 9, and spends nine and a half hours a week in classes and then wakes up bright and shiny on Saturdays ready to learn the next round of Nutcracker choreography. And she does it all without complaining and without me forcing her to be there. She just loves to dance, and when I see her on stage, the many, many hours we spent sweating in the costume shed and hot gluing ribbon on headpieces (because when you don’t know how to sew, a hot glue gun is your BFF) just seems worth it.

Fast-forward to the first week of December. Hell week. (Yes, that’s what we really call it, but it’s also known as theatre week, to those more PC.) It’s time to move all the props to the theatre and begin our week of dress rehearsals. I say “we” because even though the moms aren’t actually on stage, there’s plenty happening behind the scenes. We’re putting the final touches on costumes, learning our daughters’ stage entry and exit points in preparation for something us dance moms like to call quick changes (more on that later) and, most of all, trying to entertain a room full of hyped up girls who are overtired and just a bit moody from staying up too late the previous night for tech rehearsal so the behind-the-scenes dads could rehearse prop locations and cues.

That brings me to dance dads—yes, they do exist. If you had told me three years ago that my husband (in all his ‘I don’t dance’ awkwardness) would get on stage and not only help change sets but don a tux and dance with a group of other parents in front of an actual audience (every show for two weeks, nonetheless), I’d have said I had died and gone to the Land of the Sweets. But it’s true. Dance dads are the heroes of the show. They build sets, drop curtains, dance on stage and even make it snow right here in Ocala. Miracle workers, I say.

Opening night. Everything that we’ve prepared for. Tensions are high. Nervousness manifests in fits of giggles. Don’t stumble. Be on time. Be quiet backstage. And if you’re a mom, bring plenty of bobby pins. Here’s where I’m going to let you in on a little secret. On stage, our girls are the picture of beauty and grace. Backstage, though, it’s chaos. The minute those girls step off stage, it’s a mad dash. (Here’s where the quick changes come in.) For some of the girls, they have a matter of seconds to change from a tyrannical rat to a beautiful snowflake—all while working with costumes complete with hook-and-eye closures. (Seriously, Janet, I’ve never appreciated a zipper so much in my life.) The costumes go flying. The bobby pins are coming out of the woodwork. Moms sporting headlamps are working in the dark in teams to strip one girl and dress another in a minute flat. It’s like the pitstops of NASCAR back there. You get your girl on stage and then race around the back to meet her on the other side, just in time to do it all over again.

And then it’s over. You’ve survived opening night. Only nine more shows to go. It’s such a high to know that all you’ve worked months for has paid off. Seeing her face light up on stage, watching her smile and twirl as the snow falls at the end of the first act, there’s seriously not many more things as satisfying as that moment.

So if you make it out to The Nutcracker this month with your young daughter and she says how much she wants to be just like Clara or the Sugar Plum Fairy, don’t hesitate—it’s worth it. It really is.

And if you see me during the first two weeks of December and I seem a little off my game, just know I’ve spent too many nights in The Nuthouse—and we hope you’ll join us there.

If you're expecting guests and want to keep the ap