A renowned artist, known for her historical paintings and outdoor artworks, plies her trade among a lifetime’s accumulation of artistic inspiration and accomplishment. 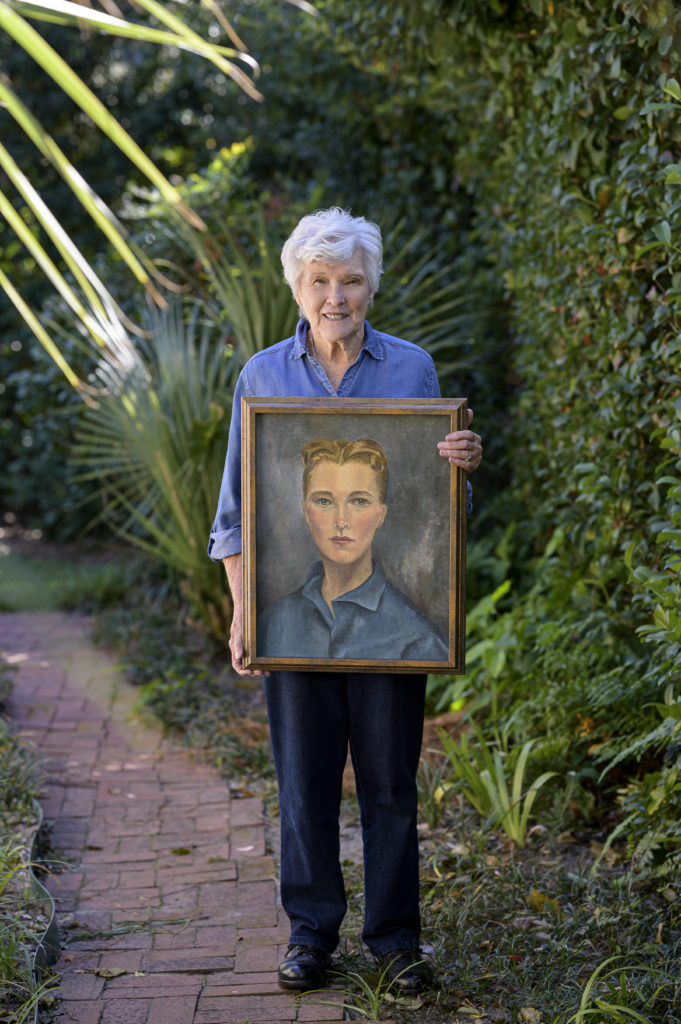 The gentle curvature of a smile, the sweeping branches of a moss-laden ancient oak, a reflective body of water and the regal outline of a historic venue are among the things that inspire artist Margaret “Peggy” Watts. And, over more than eight decades, Watts’ artful interpretations continue to inspire and delight others.

Watts, 86, has built a career on portraits, landscapes and historic scenes. She remains active in a plein air group that paints at Silver Springs State Park as well as the Artist-Alley cooperative group, which will soon have a show at a gallery in Ormond Beach that will then move to the Brick City Center for the Arts in February and to the CenterState Bank Gallery in October. Watts’ Magical Lily Pad painting recently earned second place at the College of Central Florida’s (CF) Best of the Season show and was purchased by CF for its permanent collection.

The largest of her works, measuring 11 1/2 feet wide by 17 feet high, was commissioned for placement in Queen of Peace Catholic Church in southwest Ocala and depicts the resurrection of Christ. She has more than 60 images on display at the church, including 6-by-4 painted metal plates affixed to the roof trusses over the main altar, which she had to paint high up on a lift, tethered by a safety harness.

Her pastel on paper, The Ocklawaha River from Colby’s Landing, is featured in the book Florida’s American Heritage River Images from the St. Johns Region. Her painting of the Ocala fire station built in 1894 is featured on the cover of noted local historian David Cook’s most recent book, The Way It Was: A Trek Through Marion County’s Past.

A still life painting of a table laden with a basket, apple, bowls and decanter, which commands center stage in her elegant living room, was executed under the tutelage of a mentor who studied at the Ecole des Beaux-Arts in Paris. The work was insured by Lloyd’s of London and was displayed at the renowned Vincent Price Gallery of Fine Art when it was located in Chicago. 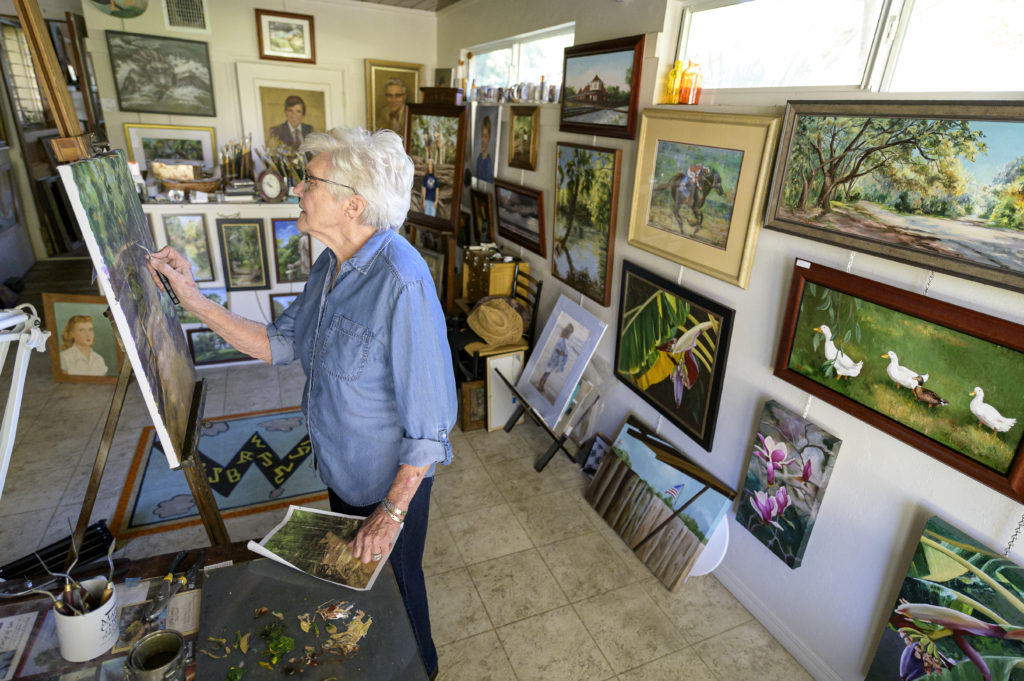 Watts, who was born in New Jersey, moved with her family to Florida in 1953.

“The year before, we came down to find a place to live where my brothers and myself could find work. We took a vacation and went straight to Miami and then worked our way back up,” she recalls. “We lived in a rural town in New Jersey, on the shore, so big city life was not going to please anyone. We liked Mount Dora, then turned north and stopped in old-timey Summerfield, on old Highway 301, and bought that little house on the corner, which later was bought by Summerfield Baptist Church.”

She got a job at the courthouse in Ocala and first commuted with other young people from Wildwood and Oxford who worked in Ocala, then with her brother, who got a job at a filling station in town. 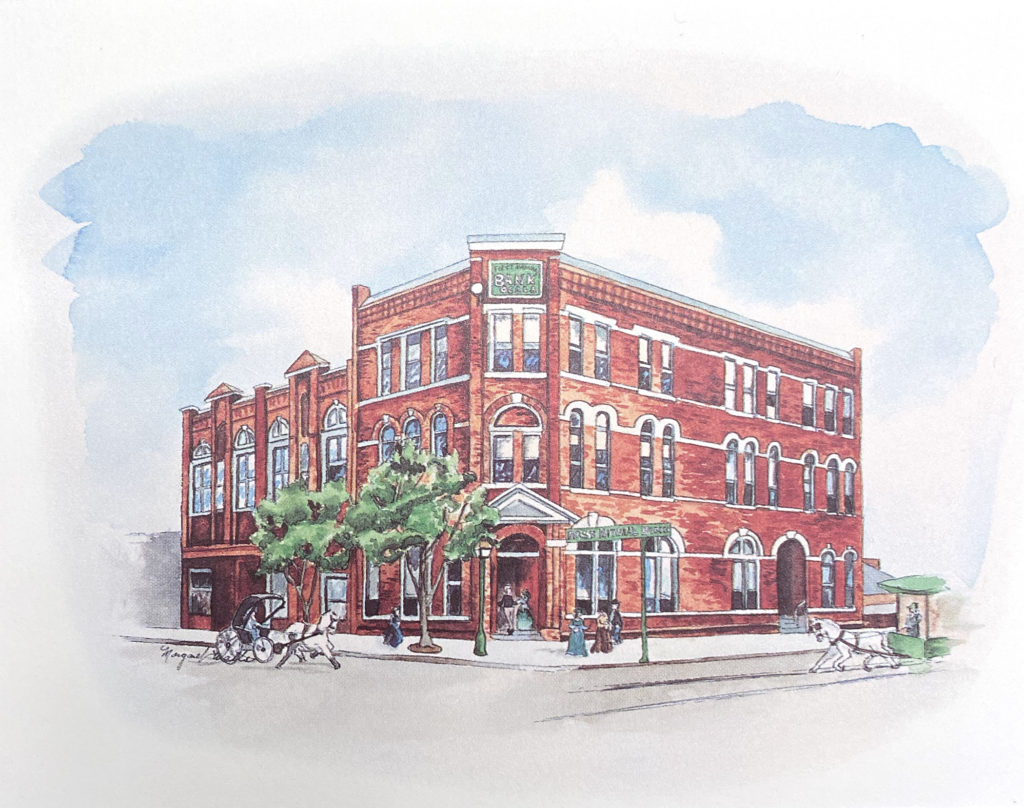 It was at the courthouse that she met her soon-to-be husband, Bernard Watts, to whom she was married for 53 years. Bernard Watts became a local legend himself, having worked his way up from copy boy to editor of the Ocala Star-Banner over a career that spanned more than 40 years. He passed away in 2013. The couple had two sons, 11 years apart. The elder, James, lives in Lakeland and John lives in Charlotte, North Carolina, with his wife Rebecca and son Ryan, 17. Watts says both of her sons went to school in Ocala and both became private pilots while they lived in the area.

As for her own education, Watts says the nuns at her Catholic school quickly learned she had artistic talent.

“From first grade, I was painting and drawing and coloring. They would pull me out of different classes and I was soon making posters and decorations for the annual school play,” she offers. “The chief money-raiser was the play and the director and the choreographer and the costumes came from a place in New York. I built a lot of stage things, such as a Chinese rickshaw, wishing wells and all kinds of things like that.”

She explains that she gained skill at portraits and soon had a following among her brothers and their friends for her paintings of sports figures such as baseball legend Ted Williams. When she wanted to learn oil painting, she says, the teacher demanded that prospective students audition. 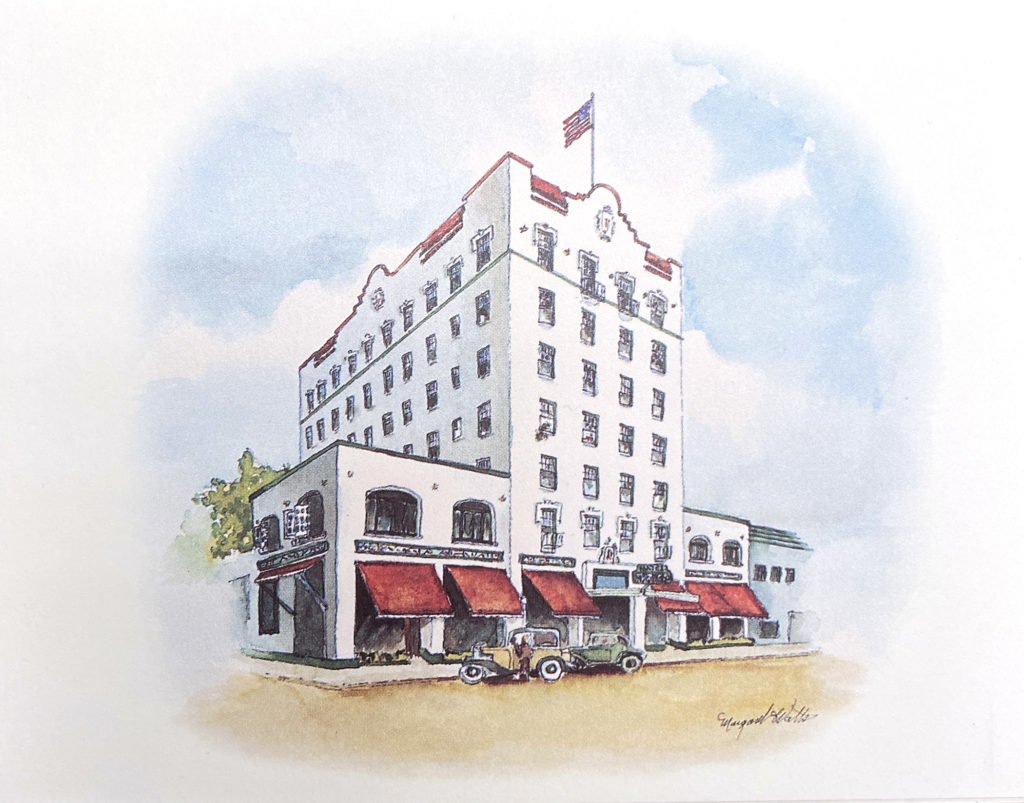 “I had to sit at her dressing table and do a self-portrait using the mirror,” Watts recalls of the experience. “She took me on as a student and I stayed with her until we moved to Florida.”

She still has that portrait, which depicts her in a white blouse with wavy strawberry blonde tresses falling to her shoulders (pictured on the top left in the portrait on the following page.)

A later self-portrait, which she holds in the first page of this story, was painted in 1965 at the behest of Joyce Brand—a fine artist best known for her illustrated “Coppertone Girl” ad. That portrait shows Watts with pursed lips, a steely gaze and her tawny hair pulled back in a ponytail. Brand became an avid supporter of artists in Ocala after relocating here from New York.

“When Joyce said to paint something,” Watts recalls, “you did it.”

A Lifetime of Works 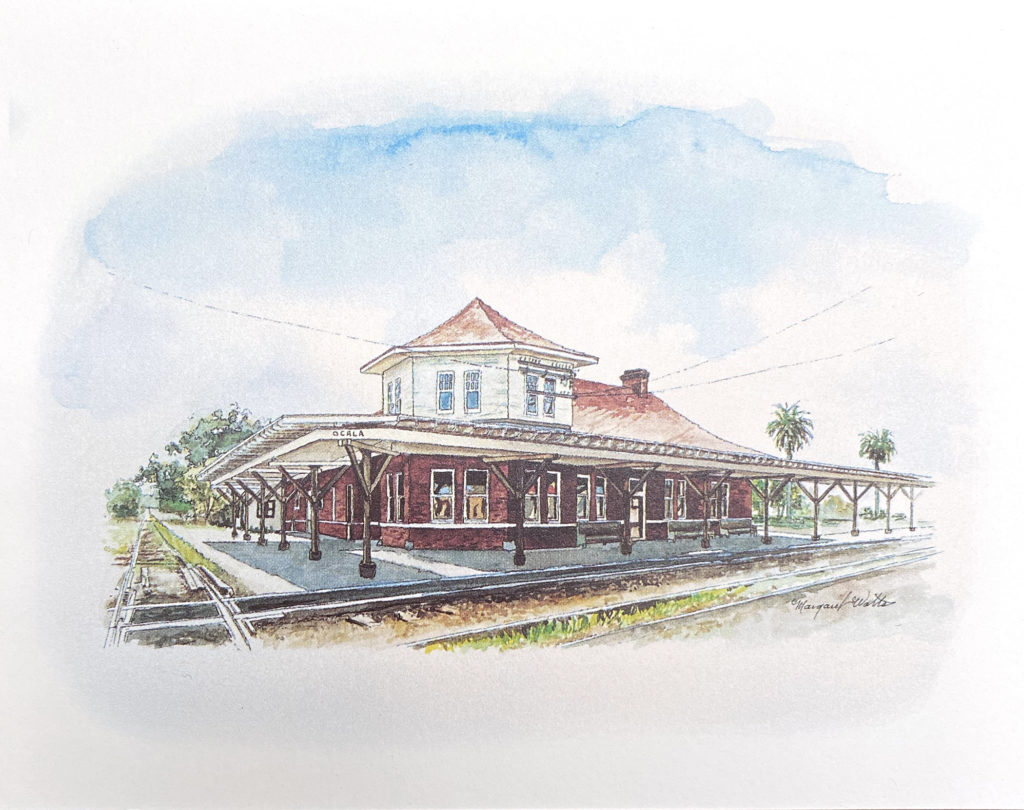 Watts notes that after she had her son James, she would paint in a “little corner” of the kitchen in her home, which was initially built by Bernard for his parents. After the birth of John, her studio moved into the Florida room and then into a converted carport.

That studio today—in fact, her entire home—has walls filled with her works, which she describes as “realistic.” They range from religious images to a commissioned work of a woman with two wolves to a railroad crossing sign. She is very well known for her depictions of historic buildings in the area, including a great many churches, as well as venues that no longer exist, like the downtown hotel and courthouse, or have been repurposed into thriving sites, such as the Hotel Marion building.

She says the “scariest” piece she ever did was based on seeing an alligator snatch an anhinga out of the water, the bird’s feathers splayed out of the toothy maw of the reptile, which gave her nightmares for years. 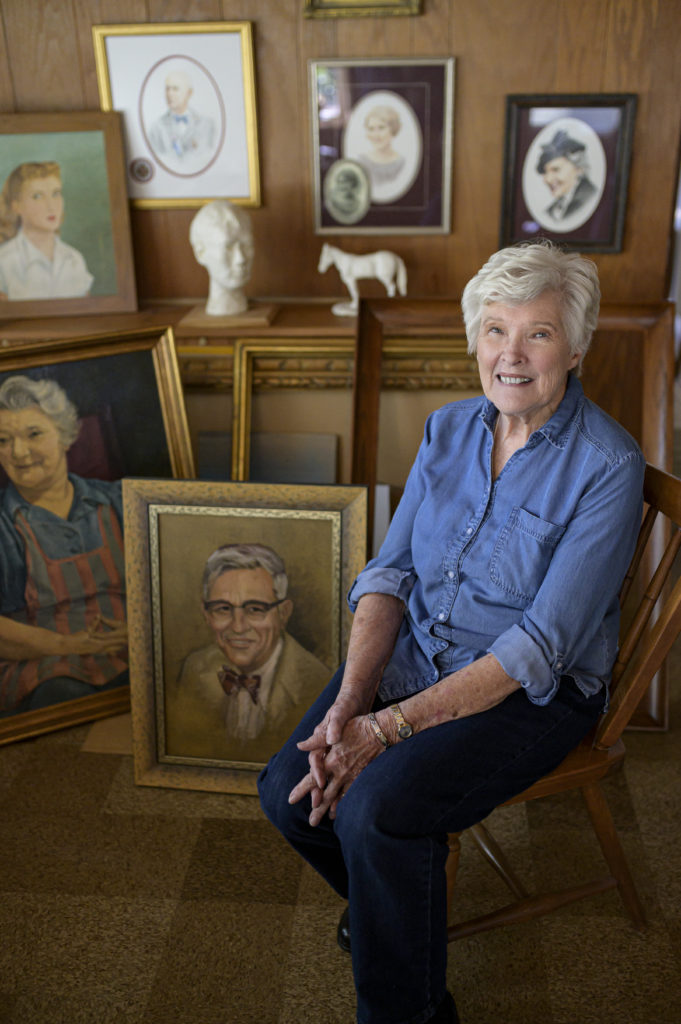 “I finally painted it and the nightmares went away,” she remarks.

Her favorite subjects are people, she offers, sweeping her arm around the studio. One entire wall is devoted to portraits of family members including her beloved Bernard, mother, father and grandmother, whom she greatly favors in looks, as well as several others.

“I like people,” Watts affirms. “At the state park, I get to meet people from all over the world.”

These days, she primarily paints portraits and landscapes. In looking at one partially completed work, based on The Yearling, and set for the show in Ormond Beach, she remarks that she is not pleased.

Watts paints with brushes and the palette knife. She has favorite colors, such as a purple background layer for landscapes, and brands of paint. Her beloved local art supply store closed, so now she orders online. She says her mail delivery man will often ask, “What are you painting today, Margaret?” 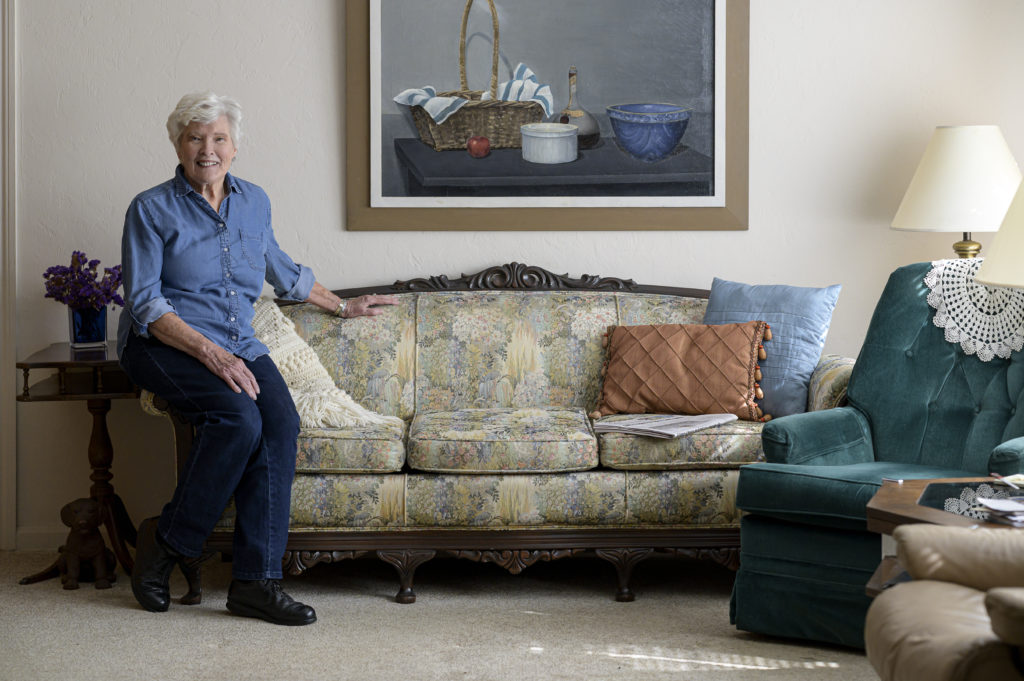 Diane Jones Pribisco has known Watts for years. She says they met in the 1970s and have painted together and attended shows during all that time.

“I was one of her students initially, then it became more of a student/mentor relationship…then friends,” Pribisco notes. “If I really needed help, she was there to help me. If not, she was there to encourage me all through my progress in art.”

Pribisco lived in Jacksonville for 28 years but now lives in Salt Springs. She and Watts are also colleagues through Artist-Alley.

Pribisco praised many of Watts’ works. “She is the most talented artist I’ve ever known,” Pribisco says. “She really inspired me to seek out the world of pastoral settings, to take notice of the beauty around us every day. Now that we’re in Salt Springs, I see something every day that she would want to paint.”