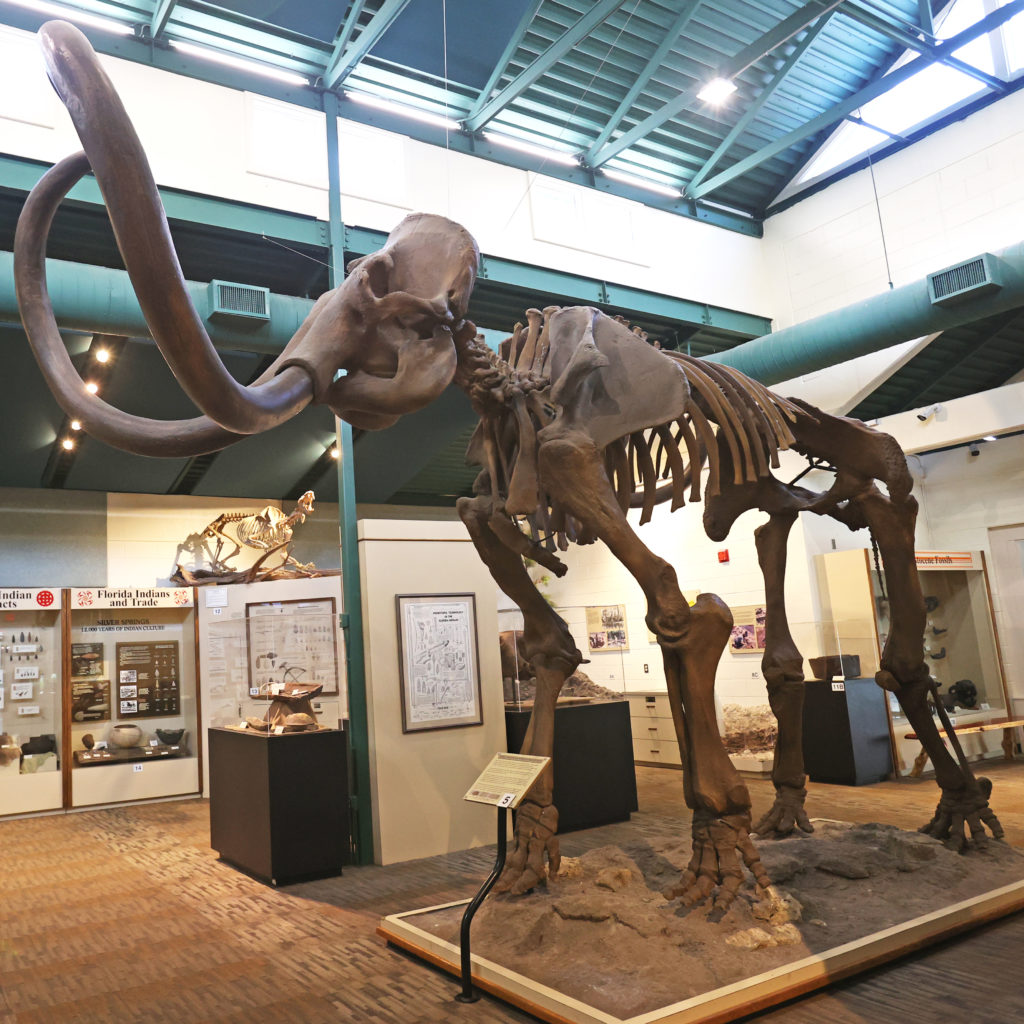 Ice Age mammoths have become accustomed to loneliness. Since the last mass extinction at the end of the Ice Age about 12,000 years ago, the poor mammoths (Columbian mammoths to be exact), or at least their fossilized bones, have been largely forgotten. Buried in the sediments of time or some ancient river bed, the poor beasts have waited patiently to be discovered and appreciated. Once found, these ancestors to the modern elephant are more often than not locked away in dusty cabinets in some museum waiting for the odd researcher to visit.

Putting large fossil skeletons back together for museum exhibits is costly and space is limited. Thus, the old bones are left unexcavated or biding their time with the earthly remains of other various species that once roamed Florida.

Under normal circumstances, the Silver River Museum mammoth is an exception and the envy of most other mammoths (save the lucky few on display at other museums in Gainesville or Tallahassee). Our mammoth, whose reassembled bones and tusks are the museum’s showpiece and semi-official mascot, has greeted visitors since 1997.

The towering skeleton has awed tens of thousands of visiting students on field trips and, we think, inspired many dozens to become wildly successful globetrotting paleontologists who have unlocked the mysteries of the past using science (or at least we hope that is the case).

However, as we can all agree, these are anything but normal times. The museum halls have been shuttered since March and we, like most everyone else, are eager to see visitors again. The mammoth has waited patiently but this year has been like no other—no students or weekend visitors for months on end. It’s been like sitting in the dusty old cabinet waiting for the researcher to arrive.

While the mammoth is a wonderful centerpiece, there is much more to our exhibits: ancient Indian cooking vessels and stone tools, cannons that once defended Spanish galleons, Silver Springs memorabilia from the golden era of tourism when our springs were one of the major attractions in the country, interactive exhibits that show how the Floridan Aquifer stores our precious drinking water and an entire new room full of displays about Native American dugout canoes. In fact, the exhibit Dugout Canoes: Paddling the Americas is brand new and had just opened in February, before closing in March. Even seasoned repeat visitors now have great reason to return. The Dugout Canoes exhibit was created by the Florida Museum of Natural History at the University of Florida and is truly a world-class installation. The display explores the central role the simple canoe had in cultures across the New World long before we had the luxury of automobiles and other modern modes of transportation.

So as we weather these unprecedented times, let us remember the stately Columbian mammoth—champion of the long game. If mammoths can wait for thousands of years to be discovered and appreciated, surely we can make it through the rest of this current challenge. In the meantime, consider visiting a museum near you to check in and say hello to the lonely fossils who have patiently awaited your return.