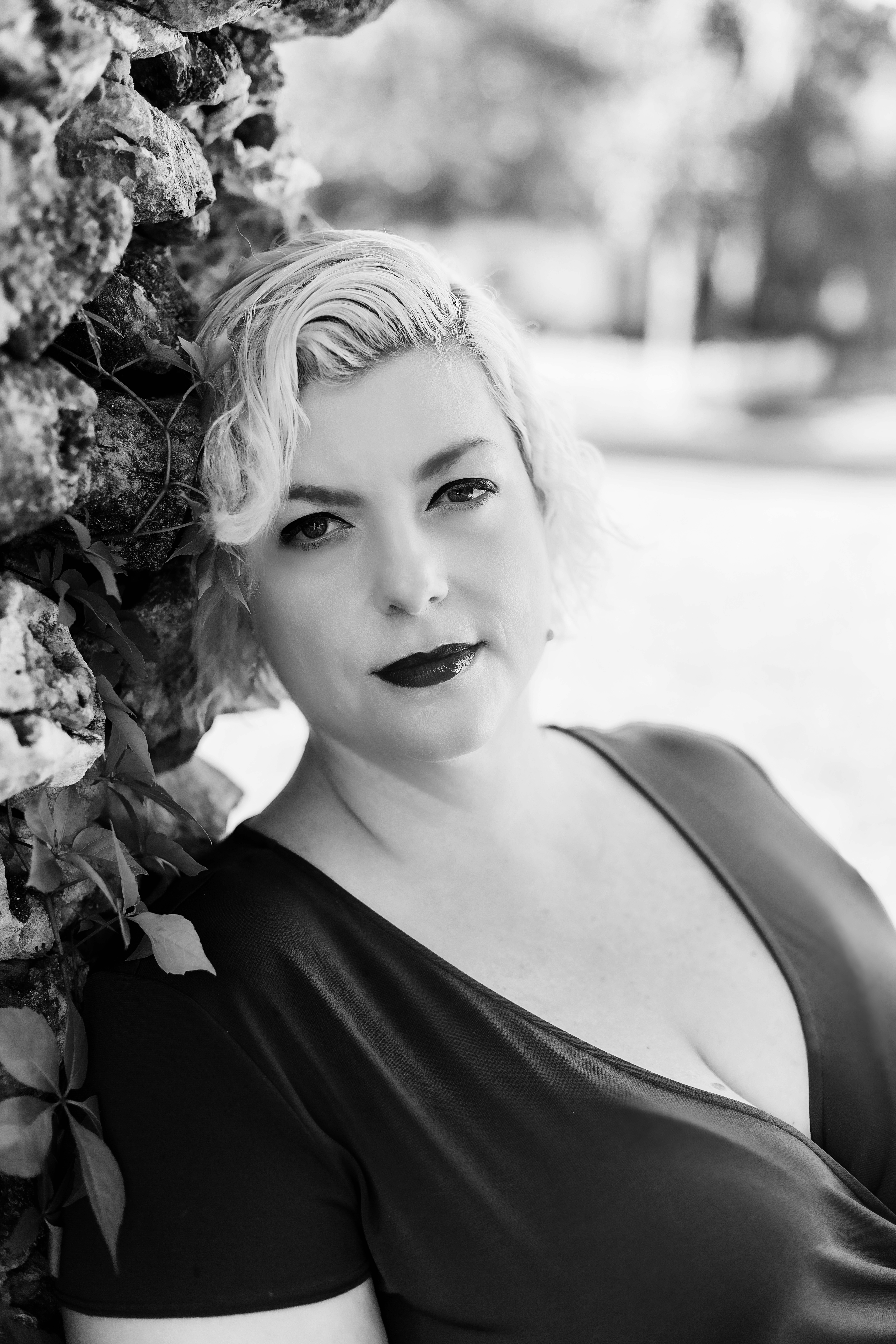 Our local music scene is hotter than ever. Meet the gifted songstress who is fanning the flames with her new solo album.

As a 12-year-old budding musician, Becky Sinn, whose real name is Rebecca Dee Hudson, didn’t have to look to the local music scene for inspiration. Instead, she took her cues from her guitarist father Robert Douglas Hudson.

“What made me want to be a musician was my dad. He played guitar, but he played old country songs and I wanted nothing to do with those,” Sinn recalls. “But he showed me my first chords.”

Once she learned those basic chords, Sinn, who was born and raised in Marion County, taught herself by reading guitar magazines and learning Nirvana songs.

“Kurt Cobain—I was in love with him,” says Sinn. “I started playing in my bedroom and my little brother, who’s only a year younger, was my biggest fan. He would tell me, ‘Becky, your voice is awesome’ and my daddy always said, ‘Girl, if you knew what you were doing, you’d be dangerous.’’’

Sinn scored some gigs in the early days, when she was just 15 years old, which laid the foundation for where she is now in her career. In fact, she essentially helped create the local music scene during the late 1990s and early 2000s through performances at Ocalapalooza, O’Malley’s Alley and K&K Rehearsal Studios & Concert Hall. She has been engaged to sing the national anthem at several Ocala Cannibals roller derby events and has even performed at a Harley Davidson dealership.

“Man, I remember when we got to play Ocalapalooza, I thought I had hit the big time there,” Sinn offers with a laugh.

Sinn’s sound is something that even she has some difficulty describing. The songstress performs as a solo artist, sings with the seven-piece band Swing Theory and leads Dr. Sinn’s Freak Island Musical Sideshow. Her voice is lush, velvety and soulful, with the power to engage the audience through her deep emotional connection to each song. Her originals have influences from swing, rockabilly and even punk rock. She’s drawn to minor chords and 3/4 timing.

“Levitt AMP was huge and it was in my sight since it started,” Sinn says. “I also want to provide the soundtrack for weddings and bigger events through Swing Theory.”

According to the Dr. Sinn’s Freak Island Musical Sideshow Facebook page, the five-member ensemble is “an escaped group of bawdy lasses with a passion for all things sideshow.”

“Dr. Sinn’s is original songs, some covers, with funny skits, fire performing, tap dancing, kazoo playing, pointe ballet and fiddle extravaganzas,” she explains. “It’s like if theater, burlesque and some clowns had a love child.”

Sinn attributes her evolution and success to many local promoters, musicians and supporters of live shows, and says she is keenly indebted to close friend Jenny Castle who helped her establish the Dr. Sinn’s Freak Island project. In fact, there is a special thanks to Castle on Sinn’s newest solo album, Lamb & Lioness, which reads, “To Jenny Castle, with love, for making so many of my dreams, including this album, come true.” Sinn wrote each of the nine songs on the album and she also plays an assortment of instruments including guitar, banjo uke, washboard and ukulele. Sinn even designed the sultry original art for the album cover.

“The significance of the album is that I wrote almost every damn song on there for and about a man I’m no longer with,” she reveals. “It is a huge love letter to the love of my life. It’s about the love, passion, hilarity and tragedy that can come out of it.

“It’s a love letter to Jenny Castle, too,” she continues, “and all the musicians that are listed on the album. It was so cool that people came together to make it sound exactly how I wanted it to sound. There are elements of folk, jazz and blues. There are so many influences.”

Castle, who is the president of the Gainesville Circus Center, is also a clown, fire and burlesque performer as well as a show producer.

“It’s quite difficult to describe Becky in a way that does her justice,” Castle says. “I may tell people how incredible she is, but no matter the preparation they are always blown away when they see her perform. When I watch her on stage and hear her sing, I feel like I am in a different place and a different era.

“Becky is the reason she is where she is today,” she continues. “I just gave her some little nudges and talking-tos to hold her accountable when she veered off course.”

Megan Whittaker, a lifelong Marion County resident and co-owner of The Keep (formerly Ocala Wine Experience) has witnessed the growth of the local music scene. Whittaker and her partner Mark Sykuta book talent and feature a variety of acts each month for The Keep’s upstairs lounge.

“She brings an element of femininity, alternative culture and style to the music scene,” Whittaker explains. “She has this uniqueness to her that is sexy, smart and super talented. That to me sums up her direct influence on the music scene locally. Plus, she is super sweet. She is this pure being.”

“I just feel so honored that people recognize me,” Sinn confesses. “It’s really wild and it humbles me so much. People come over and say, ‘You made us so happy tonight.’ I look out on the audience sometimes and hear the music surrounding me and I think, ‘How did I get to be this lucky that this gets to be my life?’”

Lamb & Lioness is available on Spotify, Pandora, and Apple Music. You can purchase the CD at www.cdbaby.com or by contacting Becky directly on her Facebook page. For bookings, visit www.facebook.com/pg/Beckysinnmusic.

Any given weekend—and often on weekdays—our local music scene offers a mosaic of talent and a wealth of live music experiences. And while this list is in no way a definitive catalog of the many talented artists in our area, here’s a roundup of a few performers who keep us coming back for more.

Ecliff’s musical appeal lies in his sultry yet energetic vocals, and his selection of cover songs connects him to a wide range of audiences. That combination also made him an excellent choice for last summer’s Levitt AMP Ocala concert, where he opened for retro-funk and soul artists Latasha Lee and the Blackties. He had previously opened for Solomon Jaye during the inaugural Levitt AMP concert series in 2017. Ecliff’s performance roster includes recurring gigs at The Keep, Cup O’ The Irish, The Corkscrew and other Ocala venues. He is currently at work on some new original material.

Olivia Mercado-Ortiz and Mike Wall recreate covers and also perform their original material (some dating back to the late ’90s when they were known as Eight Penny). Mercado-Ortiz brings a robust vocal sophistication and a diverse range. Wall brings a dynamic acoustic sound. They often invite other guest musicians to join them for their performances. They have garnered a dedicated fan base that gather at local performance spaces and are sought after for private events. They also helped create the Couch Sessions series and brought down the house at the 2018 finale event.

MADison, a self-described “vintage songstress,” revels in jazz songs and timeless vocals. Her repertoire includes captivating classics by Nina Simone and Ella Fitzgerald as well as contemporary covers of artists like Norah Jones and Etta James. She performs at the Hilton Ocala brunch every Sunday. In July, MADison opened for Tonina during the Levitt AMP Ocala concert series and has been increasingly sought after by live music venues outside our region.

Adam Volpe’s eclectic musical cooperative presents a rotating band lineup for a variety of gigs. Earlier this year, Voltron Collective collaborated with Ocala Symphony Orchestra (OSO) conductor Matthew Wardell for the Bowie & Glass: A Symphonic Tribute show. During that performance, OSO accompanied Voltron Collective on their set. In July, they also opened for The Alex Harris Band at The Reilly Arts Center. The set featured KellyAnn Ergle-Garno and Jordan Garno and highlighted some soulful funk and R&B classics. Part of Voltron Collective’s charm lies in their elusive nature and performance schedule, so catch them when the opportunity comes up.