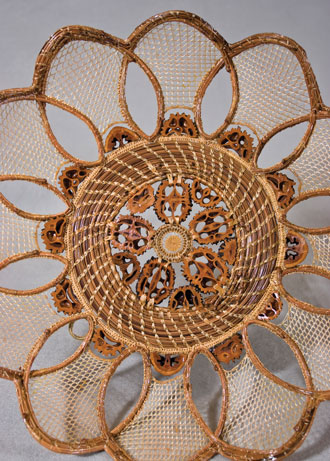 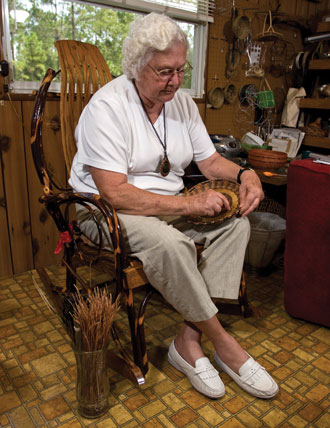 It’s hard to imagine that some-thing as fragile as a pine needle can be woven into decorative baskets, Christmas ornaments, jewelry, handbags, coasters, and even lamps. But Kaye Burlason of Altoona has been doing just that for the past 24 years. She also holds classes in the ancient art whose origins, some say, may predate pottery. The Seminole Indians were known to use pine needles in their basket making due to their ready availability.

Fortunately, availability is not a problem for Kaye. She has an ample supply of pine needles on her doorstep.

“That’s my best supply of long needles,” she says, pointing to a large stand of pine trees across the dirt road from her home.

Ironically, there was a time when she and her late husband found the pine trees on their property such a nuisance that they cut them all down. But that was before she took a course in pine needle basketry at Lake-Sumter Community College. Later, she met Mary Behrman of DeLand, an accomplished weaver who had been weaving pine needle baskets for 40 years. Under her tutelage, Kaye learned the intricate art of Tenerife, a lacy decorative style of weaving or tatting often found on tablecloths, doilies, and collars.

Kaye soon became so accomplished at the craft that she was winning ribbons at local, regional, and out-of-state craft shows. The recognition was also a great confidence builder. Soon she was experimenting with other materials, integrating driftwood shells, acorns, walnut shells, wood, bone beads, pods, cones, palm fiber, dried orange peel, stones, horsehair, even deer antlers into her various creations.

The weaving process is labor-intensive.

“What you need, besides a good supply of long pine needles,” she says, “is a lot of patience and a lot of time.”

Once she has gathered the pine needles she needs, Kaye washes and dries them, then ties them into bundles so they stay straight. Then, seated in her rocking chair, listening to books on tape, she stitches away the hours, coiling each pine needle into place with needle and thread. Sometimes, for added strength, she uses a wire frame or a piece of scrap metal on which to wrap her pine needles. When the project is completed she seals it with polyurethane for shine and durability.

Kaye’s designs are all original. She is most proud of her miniatures—chairs and tables the size of a dime. But two of her most unique projects—a pine needle handbag that took her six weeks to complete and a fully functional lamp complete with lampshade—are not for sale. The largest single basket she has ever produced measures 15 inches across and nine inches tall.

Pine needle weaving is one of the oldest crafts known. One Internet site devoted to the craft claims it dates back 9,000 years.

The Seminoles of South Florida were said to be one of the first tribes to use the naturally occurring material to make baskets.

Slaves also brought the art from Africa, where it had already been perfected, and southern women were said to have made pine needle hats during the Civil War.

Although the craft has never fallen out of favor, today it’s getting a big boost thanks to the Internet. Just Google “pine needle baskets” online and prepare to be amazed by the sheer number of Web sites devoted to the art form. YouTube.com even has a short

video clip on the subject.