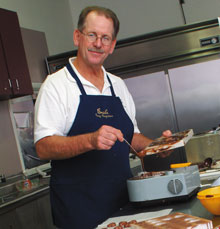 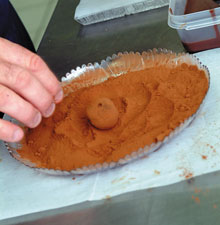 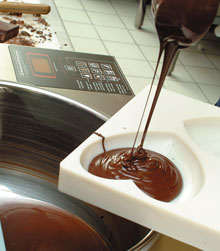 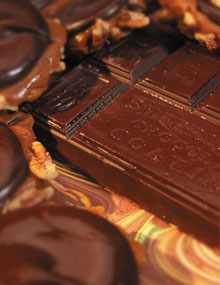 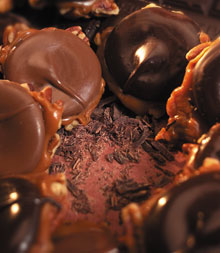 Chocolate. Ah, the word alone elicits a smile. Sweet, sinful, indulgent chocolate. Its botanical name of Theobroma Cacao literally translates to “food of the gods.” It is arguably the most craved food product in the world, inspiring legions to call themselves chocoholics.

A box of fine chocolates is a no-brainer as a sure-to-please gift for a birthday, anniversary, or house warming. Chocolate is also a good way to say thank you, congratulations, or I’m sorry. Even Forrest Gump said, “Life is like a box of chocolates,” and there was a movie just a few years ago called Chocolat.

You can even get a Chocolate Escape Package, which includes the Chocolate Fondue Wrap, at the Hotel Hershey in, yes, Hershey, Pennsylvania. Then there are the chocolate holidays: Valentine’s Day, Easter, Halloween, and Christmas.

It would seem that chocolate is as ubiquitous as it is delectable. And it has been that way for a long time, dating back to 600 AD and the Mayas of Central America. Those ancient people cultivated cocoa trees on the earliest known plantations, creating from the harvested cocoa beans a drink they called “Xocolatl,” and from where the modern word chocolate is derived. History notes that explorer Cortez is credited with introducing this ancient chocolate drink to Europe when he took cocoa beans back with him to Spain in 1528.

From Spain to France to Italy to Switzerland to throughout Europe and the world, the allure of chocolate spread to become the multi-billion dollar industry it is today.

Just what is it about chocolate that makes people chocoholics? This question has even interested scientists and prompted research into the power of chocolate. And, in fact, there are several bioactive compounds in chocolate that researchers say can contribute to feelings of well-being. Most notably among these are stimulants such as theobromine, caffeine, and phenylethylamine. But here’s the intriguing part: these chemical compounds are present only in trace amounts in chocolate and found in greater amounts in other foods that are not as craved as chocolate.

Researchers went as far as to create cocoa-filled capsules, which contained all of the same chemical compounds as chocolate. But the capsules didn’t satisfy the test subjects’ cravings for chocolate.

The scientists were forced to come to a conclusion that any true chocoholic could’ve told them: The effect that chocolate has on people is mainly a sensory pleasure. In other words, there is nothing to match the wonderful sensation of sweet, smooth chocolate melting in your mouth. Simply put, it tastes good.

But scientists have persisted in their research into chocolate. Now there are indications that chocolate may even have health benefits. Can life get any better than finding out that chocolate may actually be a health food? That may be too much to hope for, but a small research study has turned up some interesting results.

This past summer, the Journal of the American Medical Association published a small study conducted by German researchers on the effect of chocolate on high blood pressure. Thirteen adults with untreated mild hypertension ate three-ounce chocolate bars every day for two weeks. Half of the patients ate white chocolate and half ate dark chocolate.

Blood pressure remained unchanged in the group that ate white chocolate. But after two weeks, the group which had eaten the dark chocolate had lower readings in both systolic and diastolic numbers. Systolic, the top number, dropped an average of five points and the lower number, or diastolic, fell an average of almost two points. The participants had an average blood pressure reading of about 153 over 84.

While their blood pressure did not fall enough to be considered in the desirable range of below 120 over 80, the results show dark chocolate “might serve as a promising approach to reduce systolic blood pressure,” said lead study author Dr. Dirk Taubert of the University of Cologne.

Dark chocolate contains plant substances called polyphenols, the same chemical compounds scientists think are responsible for the heart-healthy attributes of red wine. Dark chocolate is comprised of cocoa paste, cocoa butter, sugar and vanilla or vanilla extract. White chocolate lacks cocoa paste and has powdered milk added to it. It would stand to reason that the cocoa paste, which is made from ground cocoa beans and gives chocolate its color and texture, also carries the good-for-the-heart polyphenols.

Another study published in a recent issue of the American Journal of Psychiatry points to chocolate as a possible antidepressant. The theory being that the carbohydrates and fats in chocolate flood the brain with feel-good endorphins, hormones, and peptides. And remember the aforementioned phenylethylamine present in chocolate? It seems the substance has been shown to boost mood in depressed people.

Okay, let’s review. Chocolate tastes good and may be good for us, too. And now that we’ve done the homework on chocolate, it’s time to do a little hands-on research.

For Ocala-based Brad Lamplot, chocolate is more than just an indulgence — it’s his vocation. Lamplot is what is known in the confectionary business as a chocolatier. Isn’t that a great word? Chocolatier. A person who specializes in making chocolate confections.

It was during a trip to New York City some 10 years ago when Lamplot first had the notion to embark on his current profession.

“We were visiting some friends of my wife’s family who had been in the candy business for generations,” he recalls. “They gave us a grand tour of their candy factory and I remember thinking that this would be a fun business to be in.”

Lamplot, who received his early cooking training in his grandmother’s kitchen, began attending candy shows and seminars throughout the country. It didn’t take him long to realize that he wanted to specialize in chocolate confections. “There was just something special about the chocolate business that appealed to me,” he said. “There was all this great history and all this creativity to it.”

On this afternoon, Lamplot is utilizing the kitchen at the Webber Center to accommodate Ocala Style for this article. The warm, rich aroma of melting chocolate is intoxicating. The long table is strewn with utensils (bowls, molds, spoons, ladles, and spatulas) and ingredients (nuts, strawberries, cherries, powdered cocoa, dark, milk and white chocolate) necessary for Lamplot to ply his trade. Already on plates are some of his signature chocolate turtles, haystacks, and truffles. Not sampling is impossible. Everything tastes wonderful.

“I buy my chocolate in large blocks called couverture,” explains Lamplot. “The best chocolate is more than 60-percent cocoa. Some of my favorites are Belgian Callebaut, French Valrhona and the Venezuelan chocolates. Of the domestics, Merckens and Peters are also very good.”

The blocks are broken up and put into melters, which are pre-programmed to first melt the chocolate then keep it at a working temperature of 89 degrees. Once in liquid form, Lamplot can then ladle the chocolate into molds (heart-shaped ones today), mix it with his truffle fillings, make chocolate bourbon cherries, or chocolate-drenched pecan turtles. All wonderfully delicious.

Lamplot’s favorites? “I think truffles are the ultimate chocolate confection,” he replies. “There are just so many varieties you can make and each has its own unique taste. I like experimenting with the different kinds of chocolates and fillings. The possibilities are limitless.”

So there you have it. A primer on chocolate and just in time for Valentine’s Day. Go ahead. Indulge. After all, February 14 is a chocolate holiday!