Peanuts are part of my earliest memory in life. Just shy of 3 years old, I sat in a hospital waiting room in Tucson, eating cheese-peanut butter crackers and drinking orange soda while upstairs, my Mom gave birth to my baby brother.

The fact that we’re so crazy about peanuts actually makes good health sense. Peanuts contain more than 30 essential nutrients and no cholesterol. They have a higher antioxidant capacity than grapes, spinach, broccoli, carrots and tomatoes. More protein is found in the peanut than any nut; although, many people don’t realize that the peanut isn’t actually a “nut” but rather a legume and is related to beans and lentils.

Peanut plants originated in South America, and peanuts were used as sacrificial offerings by the Incans of Peru as far back as 1,500 B.C. In the U.S., Dr. George Washington Carver is considered the “Father of the Peanut Industry,” having researched and developed over 300 uses for peanuts in the early 1900s.

As National Peanut Day (September 13)approaches, I decided to find out more about the various peanuts grown in our area.

The majority of peanuts in the country—65 to 70 percent—are grown in the Southeast, including Florida, Georgia, Mississippi and Alabama. While peanuts are grown in 27 counties in the Sunshine State, Marion is the southernmost county and ranks No. 5 in production, with 4,500 acres. Levy County is No. 3, while No. 1 honors go to Jackson County in the panhandle. In 2010, 135,000 Florida acres were dedicated to producing peanuts, and it’s estimated that this will expand to 145,000 this year.

Peanuts contribute over $4 billion to the U.S. economy annually, and four typesof peanuts are grown in this country: runner, Virginia, Spanish and Valencia. In Florida, most acreage is devoted to the runner variety.

Beneath a startling blue summer sky, Justin McKinney, a research coordinator with the University of Florida peanut breeding program, walks through row after row of peanut plants. At the 1,200-acre University of Florida Plant Science Research & Education Unit on Highway 318, about 40 acres are dedicated to peanuts. McKinney notes that the university’s breeding program is constantly working to develop peanut varieties that have a higher yield and are more disease resistant.

Unlike corn and soybeans, peanuts are a “forgiving” crop. They thrive in well-drained, sandy soil and can recover from hot, dry periods, which makes them ideal for North Central Florida. McKinney notes that peanut farmers in our state produce anywhere from 2,800 to 3,200 pounds per acre. Any yield over 4,000 pounds per acre is considered high and is usually only achieved with irrigation.

“Peanuts are loaded with health. I’m proud to be associated with the peanut industry,” says Richard Barber, a Marion County native who has been growing peanuts since 1967. “Farming is a lot of hard work, but it’s worth the effort. I get a lot of satisfaction from filling the need of feeding people in America.” 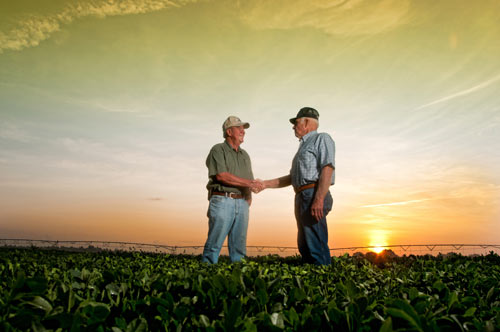 On a hot July day, Barber and longtime friend D.A. Lewis, Jr. stand in a field in northwest Marion County, examining Barber’s current crop. Both men have been inducted into the Marion County Agricultural Hall of Fame and have served as directors on the Florida Peanut Producers Association for many years; in fact, Barber was one of the founding directors. Although Lewis recently retired from farming himself, he remains active in promoting the peanut industry, while Barber continues to raise peanuts. He owns 1,150 acres, about 550 of which are planted in peanuts, and another 700 acres of leased land devoted to peanuts.

Barber’s gently rolling fields are covered with rich green peanut plants, the vast majority of which are runners. Planting season for runners takes place from April to June. Farmers spread out the planting time so they aren’t harvesting all at once.

“We put out about 125 pounds of seed per acre,” says Barber, who uses a twin-row planter that plants 12 rows at a time, seven inches apart. (And yes, the seed is the peanut.) 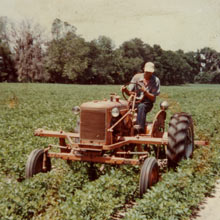 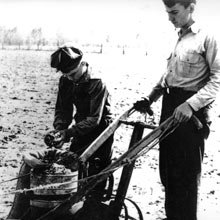 Some farmers use irrigation to water their fields; others rely on nature. Either way, plants require two inches of water per week once the nuts are growing, which is about 75 to 100 days after planting. Farmers regularly apply herbicides and fungicides to control weeds and grass, and to prevent fungus from damaging the plants. Insecticides are applied only as needed to prevent worms and other pests from destroying the crop. While it’s possible to grow organic peanuts without using chemicals, that’s tough to do in Florida’s humid environment.

Runners grow laterally, much like a vine. About 30 days after planting, yellow blossoms will begin appearing. Peanuts are self-pollinating plants, so bees aren’t a necessity as with some other crops. As the plant blooms, it puts out “pegs” that grow down into the soil where pods form on the ends of the pegs and then grow into peanuts. A mature plant produces about 40 pods.

It takes about five months from planting to harvest. To determine when to harvest, a farmer randomly pulls up five plants from different parts of the field. He then uses a pressure washer to “blast” the peanuts and compares their size and appearance to a standard chart, which lets him know if his plants are ready.

Peanut farming has come a long way since the early 1900s, when mules were used to till the soil and pull wagons stacked with peanut plants at harvest. Barber explains that today’s farmers use modern tractors and combines equipped with GPS technology. Tractors literally drive themselves; the driver is only in the seat to turn the tractor around and start back down the rows. Valencias, the peanuts used for boiling, are the only variety still harvested by hand.

Plants are pulled out of the soil by a peanut digger, which is pulled behind a tractor and digs up six rows at a time. The plants then lay in the field for three to four days (hopefully, with no rain), to dry in the sun, which helps draw moisture out of the peanuts. The farmer then drives a combine through the rows to pick up the dried plants.

The peanut hulls drop down a chute into an enormous basket, which holds about 6,000 pounds. Peanuts are then transferred from the combine to a dump cart and taken to a drying trailer where 95-degree air is blown in to continue removing moisture so the peanuts won’t spoil when stored before shelling. Some farmers make peanut hay out of the dried plants that are blown out of the combine and scattered over the field. Others turn cattle out on the land to graze.

Once runner peanuts are harvested and sold (farmers are paid according to peanut grade), they’re delivered to shelling plants.

“Peanuts usually come in from August through October and are stored in bulk warehouses until ready for shelling. We average 15,000 to 20,000 tons per year,” says Andy Robinson, a Levy County farmer and former board member of the Florida Peanut Producers Association, whose family owns and operates Williston Peanuts on State Road 41. Although the shelling plant itself isn’t open for tours, the office is open to the public and sells many types of peanuts, including roasted, shelled and fried, as well as peanut butter and peanut candies.

Peanuts will stay fresh in the hull for about one year, but at Williston Peanuts, the entire crop will be shelled by June 1 following harvest. Tractor trailers transport the peanuts from enormous barn-like warehouses to the shelling plant where the peanuts go through a cleaning machine that removes 99 percent of the dirt from the hull, along with any weeds, sticks and pebbles. The hulls pass through the sheller, a device similar to a coffee grinder, which removes the hull and blows it out into a large pile. Area farmers buy the peanut hulls to use for horse bedding and compost.

After shelling, the peanuts drop onto a set of “shaker screens” where equipment sorts them by size. Then, they’re packaged and shipped off to be made into peanut butter, candy, oil and more.

Boiled peanuts—that Southern specialty people either love… or don’t—keep Scott Seiler in business. Seiler has been growing Valencia peanuts since the early ’80s, following in the farmer footsteps of his father and grandfather. On Seiler’s farm north of Ocala, about 500 acres are dedicated to Valencias, which are sold “green” and are the peanuts used for boiling typically found at roadside stands.

“They’re a lot more work than the runner type, but it’s a steady market,” says Seiler, who ships his crop to Publix, Winn-Dixie and Fresh Market. “They’re more perishable than the other types of peanuts and have to be refrigerated after harvesting. They only have about a two-week shelf life.”

Unlike runners, Valencias are planted beginning in the winter months. Planting times are staggered so that plants are harvested April through November. (The perk for a Valencia peanut farmer is that harvesting tails off around Thanksgiving, leaving time off in December and part of January.) Valencias are harvested by hand and picked when green. They’re brought to Seiler’s packing house to be washed, packed into bushel boxes and shipped out.

The simple cheese and peanut butter crackersfrom my earliest recollections are still a favorite snack. I’ve always loved peanuts, but now that I know more about the growing, harvesting and shelling process, I’m an even bigger fan.

Come the first Saturday in October, I’ll be part of the congenial crowd celebrating all things peanut at the Central Florida Peanut Festival in Williston. But this year, as I savor one of those warm, melty grilled peanut butter sandwiches they give away, I’ll appreciate the humble peanut more than ever before.

Runners: Over 50 percent of crop goes to peanut butter; the rest goes to candy and other uses.

Virginia: Largest of the peanuts; commonly sold at ballparks and for candy.

Spanish: Small, red-skinned peanut popular for eating and not commonly grown in Florida.

Peanuts by the Grade

When peanuts are sorted at the shelling plant, they’re divided into several different “grades” or categories:

Mediums: Next largest in size; main ingredient in peanut butter.

Splits: Peanuts that are split in half during the shelling process; usually go to peanut butter.

Celebrate the peanut on October 1 at the 23rd annual Central Florida Peanut Festival in Williston. Along with peanuts (bagged, boiled and served up in tasty grilled PBJ sandwiches), you’ll find classic cars, antique tractors, a petting zoo and a variety of vendors, as well as the popular Little King, Queen and Baby pageant. There will be live entertainment all day. The festival takes place from 9am to 4pm at Heritage Park located at the intersection of U.S. Highway 27 and Main Street. Free parking and admission. Contact the Williston Area Chamber of Commerce at (352) 528-5552 for additional information.