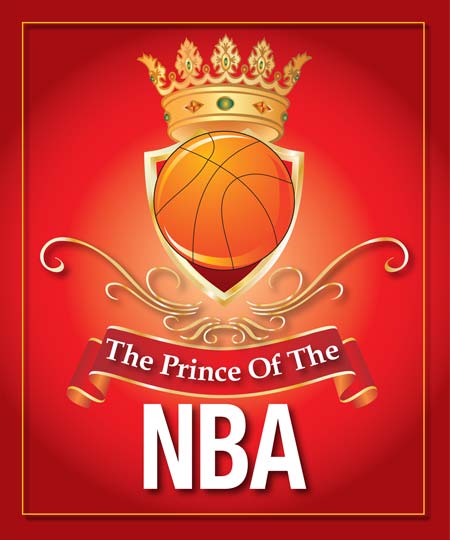 From the Bruins to the Bucks, Luc Richard Mbah a Moute’s basketball career has been one right move after another. But for this Montverde Academy graduate and Cameroonian prince, staying true to his roots has been his greatest success.

Over the steady drone of rain on its roof, the Henry Roberts Gymnasium is a booming echo of Nike screeches and low shouting. The action pauses as one player stops short, fakes, then raises his arms and jumps, sailing the ball through the air. A blink later, the swoosh, and with it, a quick round of applause and the return of rubber squeals on the polished floor. The jerseys’ colors blur as the players pivot and race back down the court, their strides shortening as they reach the key, a staccato of footsteps. A fast pass, another shot, and the battle presses back up the court again. Slowly pacing the sideline, Coach Kevin Sutton is watching intently.

The humid summer afternoon turns to dusk as the scrimmage game at Montverde Academy ticks down on the gym’s scoreboard. Over 2,000 miles away, on a similar if more prominent court in Las Vegas, Luc Richard Mbah a Moute is preparing for a pre-season game of his own as a newly minted forward for the Milwaukee Bucks. Just five years ago though, the 6-foot-8-inch NBA player could be found in quiet Montverde, right in the thick of Coach Sutton’s workout. 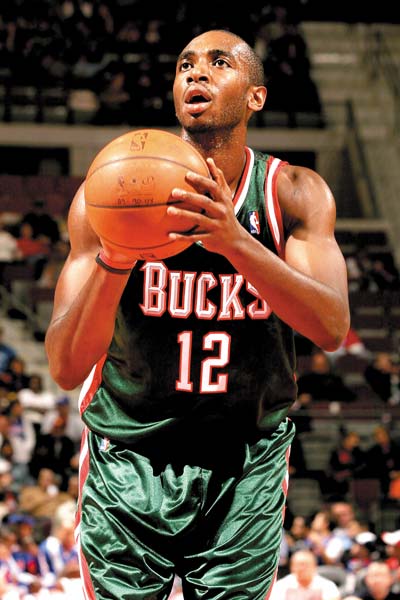 “His practices were not easy,” Luc recalls. “But Coach Sutton helped me a lot in knowing what to expect at the next level. He’s one of the best coaches in the country.”

A Pac-10 Freshman of the Year at UCLA and second-round draft pick in June, the Cameroonian athlete began his basketball career under Kevin’s guidance, a promising 16-year-old some 6,000 miles away from home.

Luc was born 22 years ago in Yaoundé, the capital city of Cameroon. His father is the chief of Bia Messe, a small village outside the capital of the West African country, making Luc, in fact, a prince. Growing up, Luc’s sport of choice, like so many youngsters around the world, was soccer. It wasn’t until a local coach started a basketball league that Luc, then 14, was introduced to the game. 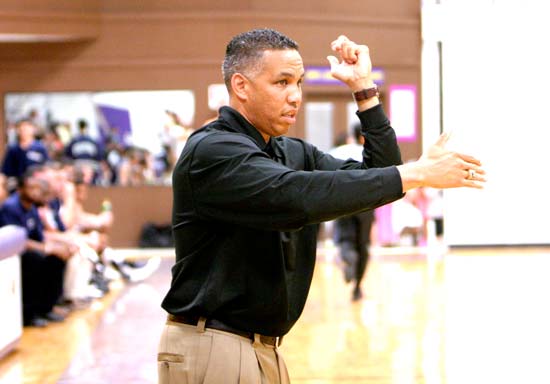 “I wanted to come to the United States because that was the only place I could play basketball and go to school at the same time,” Luc says. “A friend of my dad’s knew Coach Sutton.”

Stephane Bakinde, Luc’s best friend since childhood and a fellow Montverde graduate, remembers their move to the U.S. as more thrilling than intimidating.

“It was exciting,” he says. “The fact that I had Luc with me, it was just a big adventure.” 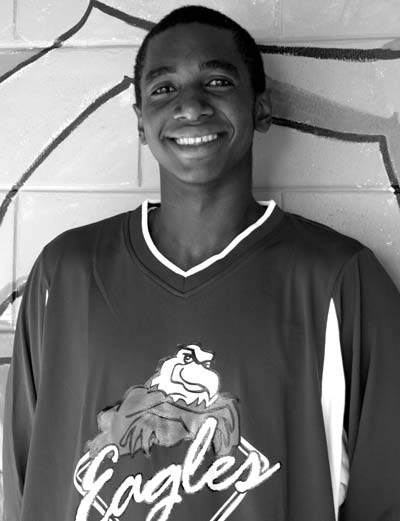 Assistant Coach John Sickels describes young Luc—a junior when he arrived—as “a project that wasn’t quite finished. But you could see, just by anything you asked him to do, that he was capable.”

In the school’s gym over their first year together, Coach Sutton saw flashes of Luc’s ability, a natural athleticism and talent that the veteran coach immediately began to develop. As Luc logged hours on the court, his confidence and skill level soared. He quickly progressed from eight points a game his junior year to 21 points the following season. 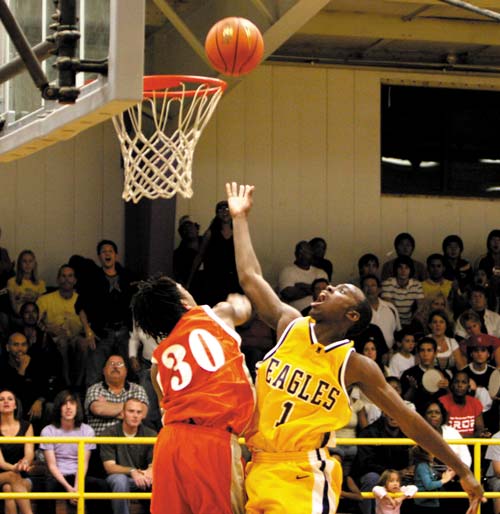 “Unbelievable work ethic, a tireless work ethic,” Sutton emphasizes. “He was captain of the team his senior year and named Lake County Player of the Year. He did everything. You could just see him getting better and better.”

Before long, college recruiters came calling: Virginia Tech, South Carolina, UCLA, Georgia Tech. The venerable head coach at UCLA, Ben Howland, sat in on practices himself. On the third day of his visit, Howland turned to Sutton and said simply, “He’s got a scholarship to UCLA.” For the man who had nurtured Luc both on the court and off—the teenager lived with the Suttons during the summer—the moment was humbling.

“I was elated for him because of the fact that he left home with the idea and the hope that he could get a scholarship,” Sutton says. “To see dreams become realities is very gratifying.”

While he was undoubtedly the team’s leader by his final year, Luc was never the team’s superstar. No one on Coach Sutton’s team ever is. Spectators won’t find a shrine to any single player’s achievements in the school’s gymnasium or the team’s national championship banner hanging from its rafters. Sutton stresses the collective, which explains why the only sign he allows simply lists the 18 players’ names.

“That’s the most impressive banner,” he says. “That’s what our program is about.”

Luc headed west again—this time to California and the 11-time NCAA Champion Bruins. His transition from small-town Montverde to sprawling Los Angeles was made easier by an immediate friendship with Cameroonian teammate Alfred Aboya and the support of the Cameroon Crazies, zealous student fans whose enthusiasm for the two African players garnered national attention. For the freshman who hadn’t been home in two years and whose parents had never seen him play in the U.S., the fans filled a familial void.

“Being away from my family, not having anyone there during the game, they made me feel good. I’m very grateful for what they did,” Luc says. “It helped us win a lot of games.”

Luc thrived at UCLA, playing all 39 games his freshman year and starting in 38. He was named the Pacific-10 Conference’s Freshman of the Year and started in three-straight Final Fours, the first UCLA player in 34 years to do so. In April, Luc’s parents finally had an opportunity to travel to the U.S. to see their son play, UCLA’s Final Four match-up against the University of Memphis and Luc’s last in a Bruins uniform.

In June, Luc decided to forego his senior year to enter the NBA draft, and the Milwaukee Bucks picked him up in the second round. The first phone call Luc received after the announcement was from his parents who had been watching from Cameroon. 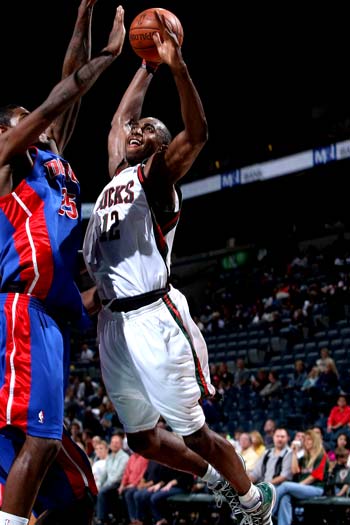 “They stayed up all night watching the draft. It was one of the greatest things ever,” he says. “It’s something I’ll never forget.”

Sutton’s wife, Beth, who still talks to Luc weekly, remembers the night well, mostly for how excited yet unaffected he was by his ac-complishment.

“Luc and I talked on the phone about 20 minutes after the announcement,’” she remembers. “And the first thing he asked was ‘How’s everyone there doing?’ That’s Luc, though.”

To whom much is given, much is expected. For Sutton, now in his 23rd year of coaching, that’s the most important lesson he can impart to his young players, one far more important than any move he teaches them on the court. Born into a family where giving back and helping others is a way of life, Luc has taken the lesson to heart.

“My dad, being a leader, has dedicated his whole life to giving back. He instilled in me the notion of always caring about others more than you care about yourself,” Luc says. “My dream is to become a United Nations Ambassador for Cameroon. I’d love to use my influence to help others.”

Montverde Academy Headmaster Kasey Kesselring is not surprised by Luc’s intention to parlay his athletic success into a philanthropic future. A strong character and sense of humility, he says, has always been the true measure of Luc.

“While he’s a super athlete and a very good basketball player, what makes Luc special is his character,” Kesselring says. “He’s never forgotten where he’s come from, and as a result, his appreciation for his achievements is that much greater. Luc as a person is his greatest asset.”

Home has been several different places now for the ambitious athlete, but Luc has a special affection for his old high school. He calls it simply “my base.”

“That’s where it all started. Without Montverde, Coach Sutton, and all the people there, I would never be where I am right now,” he says. “I’m very thankful for them. It’s changed a lot since I’ve been there—a new gym, a nice bus—but that’s good. That makes you feel like all the hard work you put in finally paid off.”

Back in Montverde, the gym aglow against the darkening sky, Sutton’s players huddle up to listen to their coach’s assessment, wiping sweat from their brows and shifting their weight from foot to foot as they nod in understanding. A final round of applause breaks up the group, and the tired athletes jog off to the locker room. Hopeful and eager, they hail from as far away as Russia, Nigeria, Australia, and Senegal. As he closes down the gym for the night, Sutton has their futures on his mind.

And somewhere in Nevada, so does Luc.

WANT TO SEE A GAME?
Visit www.montverde.org for the Eagles’ basketball schedule. Also, the Bucks play in nearby Orlando against the Magic on Friday, March 27. Visit www.NBA.com for ticket information.