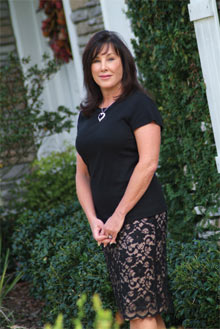 If there’s one thing I’ve come to expect in this business, it’s to expect the unexpected. Nowhere is this axiom truer than in how we discover the people to feature in our articles.

There are a lot—and I do mean a lot—of fascinating people in our community. We can very proudly count actor John Travolta and famed music producer Bruce Swedien among our neighbors. But we also have a wealth of lesser renowned but equally compelling residents living among us who have incredible stories to tell.

Take, for example, Clay Parton, who graces this month’s cover. He’s a gem of a find by any magazine’s standard, but especially one like ours that prides itself on featuring local people of interest. It doesn’t get more interesting than a Parks & Rec youth leader who once graced the pages of French Vogue, posed with Kate Moss for photographer Bruce Weber and walked the runways of Dolce & Gabbana.

So how did we “discover” Clay? By accident, as it turned out.

I first met Clay at his workplace. My husband and I were camping at Carney Island Park with our grandson through a program with the Marion County Parks & Recreation department when we struck up a conversation with the personable counselor. As they often have a way of doing, our chat meandered to the subject of where Clay was from, how he came to Ocala, what he had done previously. And that’s when Kate Moss and Dolce & Gabbana came up. You can imagine our surprise, especially when he mentioned it as nonchalantly as possible, as if it were truly no big deal.

The wheels were set in motion, and before long, we were working on a piece about Clay’s life for an upcoming issue. Then the decision was made that a model like Clay should certainly be on our cover. Hence the issue you hold in your hands with the accompanying feature on page 38.

All of this begs the question—how many other Clay Partons are out there in our community, their stories just waiting to be told? No matter how many fascinating story ideas we cull from our staff’s own chance encounters, intriguing meetings with locals and the like, we can never have too many leads from readers like you to learn about the outstanding individuals in our area who we haven’t heard of yet. They don’t have to be—and likely won’t be!—models who opened fashion shows in Milan. But Ocala Style is a magazine about real people leading real lives and doing extraordinary things. It could just as easily be the waitress who serves you coffee in the morning. Or the school teacher helping your child after school. Perhaps the gentleman you struck up a conversation with in the grocery line.

It just so happened in this case that it was my grandson’s favorite counselor from camp. Who once worked for Armani.