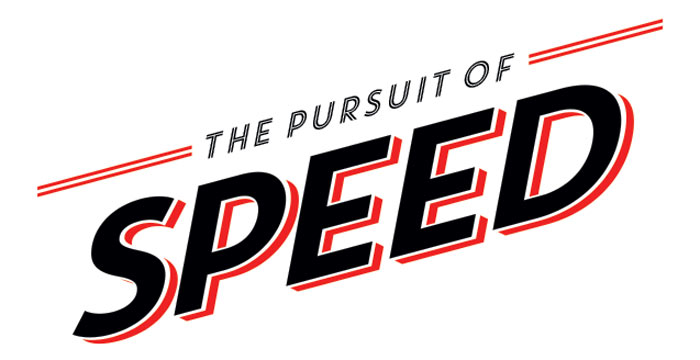 Donald Glenn Garlits was only 17 when he got his first taste of street drag racing in 1949, but that was all it took. He started racing the following year and won his first major national victory in 1955. The thrill of speed captured him from the first race… and it’s never let go.

In a long and amazingly successful career, Don, a native of Sulfur Springs, Florida, achieved great satisfaction from setting many records. But he also loved the process of building his dragsters from scratch—starting with tubing and sheet metal—something that really doesn’t happen anymore.

“I like metal art and every one of these cars is art,” he says. “I was the last guy racing who built his own cars, his own engines, and then got in and raced it. Now it’s all compartmentalized. There isn’t even one guy who builds the engine. It’s done by several guys, and they’re each building separate parts of the engine. It’s all different now. In the old days, it was more personal.”

In a career spanning over four decades, Don witnessed enormous changes. One important change in safety was something he initiated after a serious accident in March 1970 when a transmission explosion blew his car in half, broke his left leg and took off a good portion of his right foot. (Although he can get around fine, he has no toes on that foot due to the accident.)

“The cars were so dangerous back then because the driver was behind the engine,” he remembers. “Six drivers were killed within the two years leading up to my accident. From my hospital bed, I designed a rear-engine dragster with the driver in front of the engine.”

The following year, at age 39, he became the first driver to win a NHRA national event with a rear-engine dragster. His new design soon made the former front-engine style fade into the history books.

“That rear-engine design is still out there and winning races today,” says Don. “Other than the museum, that’s the thing I’m most proud of.”

And speaking of the museum, it’s truly one-of-a-kind. The first Don Garlits Museum of Drag Racing opened in 1976 in Seffner, Florida, and was moved to its current location in Ocala in 1983.

“This is the only drag racing museum on the planet,” says Don with heartfelt pride. “People come from all over the world to see these cars and memories of the sport that go back to when drag racing started in the 1940s.”

The museum showcases the sport itself, as well as the long history of Don’s awards and hand-built Swamp Rat dragsters. There’s also a gift shop with plenty of racing-related items. 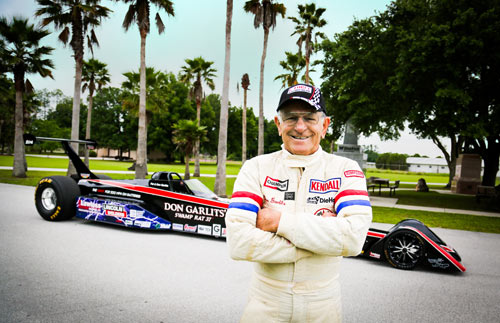 Now 82, Don is in better shape than many people decades younger. Staying fit and healthy is something he takes seriously.

He starts each day with 20 minutes on the treadmill, followed by a 30-minute Bowflex routine in his home gym. Because his home is on the same property as his Don Garlits’ Museum of Drag Racing, he rides his bike to the shop each day. In addition, he’ll regularly load up the bike and head to one of the area’s trail heads—Santos, Silver River and the like—for longer rides. And by longer, we’re not talking a few miles. It’s not uncommon for Don to get in a 35-mile bike ride.

He also does a lot of walking and enjoys kayaking; anything he can do outdoors is a plus.

“I get lots of fresh air. I’m not in the AC a lot; my shop is not air-conditioned,” says Don. “I almost always get eight hours of sleep a night, and I also sleep with my head toward the north like you’re supposed to do, because this puts the blood to your feet.”

He pays close attention to his diet and knows that plays an important role in overall health.

“I watch my food and try to stay away from sweets and carbs, especially white flours and white sugars, which are really poisons,” notes Don. “I buy all organic every chance I get, including my milk, and I eat lots of fruits and vegetables. I’m not a vegetarian, but I only eat small portions of meat, mostly chicken and fish. I do take some vitamins and supplements based on recommendations from my doctor. Everyone’s different, so you need to go to a doctor to see what you’re deficient in to know what to take.”

Lest you think drag racers don’t need to be in shape, Don will set you straight on that misconception.

“The driver has to be in good shape. That car moves at about 5Gs, so for someone weighing 150 lbs, it’s as though they weigh five times that when it leaves the line, which puts a lot of pressure on your organs and entire body. I’ve got a special seat in this car that is form-fitted to my body. Without that seat, you’re slammed against the seat and you’ll be bruised.”

If 5Gs do a number on the body, imagine the impact of today’s top fuel dragsters, which pull a shocking 8Gs. 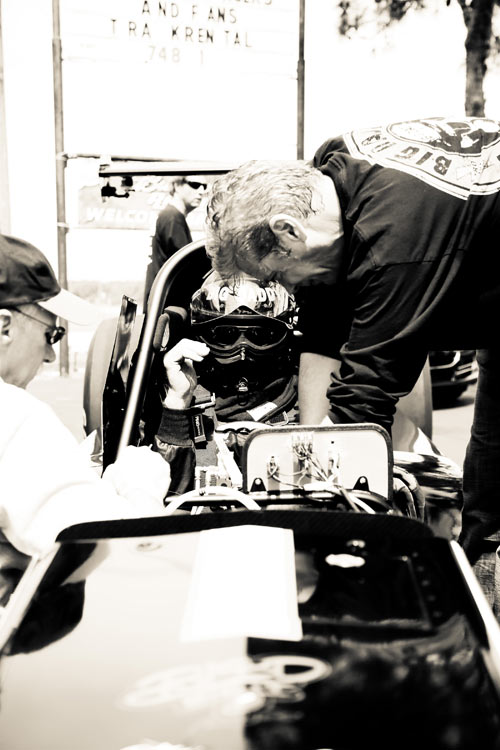 Don married Pat, his high school sweetheart in 1953. Sadly, she passed away this February, just shy of their 61st wedding anniversary.

Today, their daughter, Donna Garlits, runs the business, which frees Don from tedious work details, but he’s still up early every morning and on the computer after his workout, seeing to anything that needs his attention. Most of his days are spent happily working in his shop at the museum, where he can be found building an engine or refurbishing a dragster.

On occasion, he leads behind-the-scenes tours at the museum, and every summer he hits the road, heading around the country to various dragster reunions where he’s often the celebrity guest. He raced at those same tracks when he was younger; now he’s there signing autographs and selling souvenirs to fans who are tickled to take home some “Big Daddy” memorabilia.

And if you think Don Garlits’ racing exploits are all in the history books, think again.

His latest quest for speed, however, doesn’t involve fuel. Instead, he’s joined a select group of drag racing innovators who are determined to create a record-setting electric dragster.

The idea of a record-setting, battery-powered dragster took root in 2012, when Don participated in a match race tour racing small electric dragsters that were little more than “glorified golf carts.”

The crowd loved them, and the cars’ builder, Mike Gerry, approached Don with the idea of building a “real” electric dragster and going for a world-speed record. Don thought that sounded like a grand idea.

Gerry contacted Brad Hadman to build the chassis, while Derek Barger of High Tech Systems handled the battery pack and Shawn Lawless of Lawless Industries built the electric motors. The project was substantially funded by a mutual friend, JT Stewart, whose unexpected death in 2012 caused a slight delay in the project. But by December 2012, the team had a chassis and drive train ready to take to the Gainesville Raceway for some initial “squirts” off the starting line.

“The car lacked a lot of the safety equipment necessary for wide open throttle, full pass run, but I made about four ‘squirts’ and was satisfied that the car was capable of 200mph on a full pass,” recalls Don of those first test runs.

Fast forward to April 30, 2014. The team and their completed electric dragster gathered at the Bradenton Motorsports Park, determined to make some record-setting runs. To offset the cost of opening the strip during the week, spectators were charged $10 to attend and some 1,000 people showed up.

Don was curious if the lack of engine noise would put a damper on the crowd’s enthusiasm, but that wasn’t the case.

“They loved the car, even without the ear-deafening roar from a Top Fuel exhaust. Fans love that noise, but it’s really bad for their hearing,” says Don, who suffers significant hearing loss himself after all his years of racing. “The electric dragster is completely silent, except for the squealing of tires and the shifting of gears. There’s such an adrenaline rush because it’s not making any noise and then it just goes!”

Powered by a 1,500-kilowatt array of lithium polymer (LiPo) batteries producing an equivalent horsepower rating of over 2,000 horsepower, the electric dragster can hit the 60-foot mark almost as fast as the nitromethane-powered NHRA cars. As Don explains, “the car launches so hard, that you need a special formed seat, so the hard launch doesn’t hurt your back.”

Although the April 30 runs didn’t break the 200mph barrier, they did break records, smashing the previous electric dragster record of 156mph in 7.95 seconds.

The team plans another attempt in early June, following some “tweaks” to the electric power controller and gears. The goal is to set the 200mph record in 2014, as this year marks the 50th anniversary of Don’s first official 200mph run in 1964.

“We think that 200mph is just around the corner,” says Don. 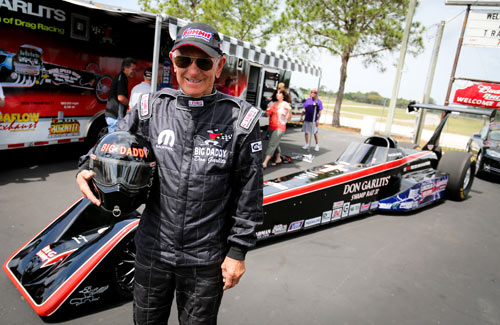 Always an innovator, Don would love to see a class for electric dragsters added to the sport.

“That’s what I’m trying to pioneer. I love dragsters. The (fuel-powered) cars are put together like pieces of jewelry built by the finest craftsmen. Then, you take that car out to the racetrack and blow it to bits. I just can’t stomach that. It’s also very expensive, so the majority of dragsters are owned by just a few people in the sport. Electric dragsters would put it back into the hands of the average person. I see it as a sustainable class that could go on live TV.”

He adds that electric-powered cars are much lower maintenance than fuel-powered, which often require significant time between runs because of the time needed to repair the cars and clean up spilled oil on the track.

“For 2015, I’d like to build a second electric car and do a whirlwind tour of some of the drag strips around the country and let my grandson, Rodney Donald Garlits, drive the second one,” says Don. “We haven’t even scratched the surface on technology of what we can do with electric cars. We have the cleanest possible way for transportation.”