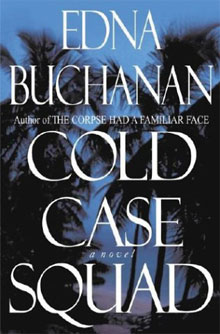 Award-winning novelist Edna Buchanan is scheduled to be the guest of honor at a “murder mystery”-themed gala to benefit the new downtown public library on September 23.

With the grand opening of the new Ocala Public Library, the Friends of the Library are putting together a gala event to further benefit and enhance the new facility. The murder mystery dinner is scheduled for the Ocala Hilton and, with room for more than 300 guests, is sure to be a memorable and exciting evening.

As a special treat to those attending, award-winning crime author Edna Buchanan, who wrote You Only Die Twice, The Corpse Had a Familiar Face, and The Ice Maiden (among many others), will be a featured guest and speaker. The highest auction bidder will receive the most unique prize of all — a pivotal role in her upcoming novel.

Edna Buchanan has been entertaining her readers since winning the Pulitzer Prize as a crime reporter for The Miami Herald. The Chicago Tribune once raved that “few writers can touch Buchanan” and The Washington Post Book World said, “I doubt if anyone else is doing it better.” In Cold Case Squad, Edna Buchanan, the woman the Los Angeles Daily News calls “The Queen of Crime,” delivers unlikely killers, near-perfect murders, and her most suspenseful novel yet.

I recently had a chance to speak with Edna about her career, her best-known characters, and what it takes to become an established novelist.


How has your experience as a crime reporter assisted your novels? Is crime drama something you were always interested in?


I would have written books whether I was a reporter or not. Journalism for me was an accident, but Miami was a gold mine for reporters. When I would go out on the police beat I would meet Romeo and Juliet, King Lear, or Hamlet every day. On bad days, I would meet them all.

Do you take real cases and apply them to your novels?


All my stories are fiction — none are recognizable cases. I would think about cases that I wrote about, fictionalize them, build on them, and change it so the participants in the case wouldn’t recognize it. In the end, I feel a little closure about these cases that have haunted me for so many years. In my novels, I have the power to control the ending.

What inspired you to begin writing your new novel Cold Case Squad?


Cold Case Squad is the novel I’ve wanted to write for 20 years. In January 1984, I wrote a lengthy feature story for the Miami Herald about Miami’s new cold case squad. I was blown away. The idea that the police can apply new Star Wars-type, high-tech forensics to solve these old cases — it’s mind-blowing. I just love it. I love forensics. Who would have thought that a killer could be identified by a sandwich he bit into or by a fiber from a coat? I love that “A-ha, gotcha!” moment.

Do you have a favorite case or character from any of your novels? If so, which one and why?


I’m especially fond of You Only Die Twice. It’s a very stimulating plot with a big storm and a serial killer. While I enjoyed that book, there’s something I love about every one. It’s like asking a parent which child they like the best.

What are your favorite aspects of writing fiction verses real life crime reporting?


I’ve wanted to write it since I was 4. We writers like to be tidy and solve the perplexing mysteries and clues. But in real-life journalism that doesn’t happen — the truth can be pretty grim. The beauty of fiction is that you can unravel all the mysteries, put the clues together, and — best of all — write the ending. You can make the good guys win and the bad guys get what they deserve.

What goes into the research and preparation before writing a novel?


You never know where the story will take you. I like to go out and research. You have to be just as accurate in novels as in journalism. I don’t want to have my poetic license revoked.


I’ve always told people that writing a novel was like having a baby. It takes about nine months to produce, it weighs five or six pounds when you send it off to the editor, and then you send it into the world and hope it’s well-received and well-liked. Of course, then you hope that someday your child will send some money home to you.

You were awarded the Pulitzer Prize for your crime writing and have been nominated for other prestigious writing awards. What does it mean personally for you to be acknowledged like that by your peers?


It’s very nice. I think the Pulitzer was the most important acknowledgment for my career. I was completely surprised when I won that award. It was really a triumph that a single beat reporter could win the best award in journalism. I was up against the entire staff of the Philadelphia Inquirer for their weeklong coverage of a local ordeal and the entire staff of the Dallas Morning Paper for their weeklong coverage on an air disaster.

What are you doing when you’re not writing?


When I’m not writing, I’m usually wishing I were writing. I really do enjoy it. I have more laughs and more exhilarating moments when I’m at the keyboard interacting with my characters. I’m afraid to leave Miami because I’m afraid I’ll miss something. I’m also an animal and pet lover.

Is it you or the characters that write the story?


That’s a very good question. When I wanted to write my first novel, my editor didn’t want me to do it. When I finally confronted him about it, he said that when someone is known for playing the violin, you have to have reservations when they plan to play the tuba. Finally, they reluctantly gave me a two-book contract.


I sat down to write the novel and I panicked. I thought, What if I really can’t play the tuba? I kept looking for my journalist’s notebook and it wasn’t there. I was on my own this time.


Then it finally happened. In chapter three or four, the characters suddenly sprang to life and started doing things I didn’t expect. The villain was far more villainous than even I imagined. Flossie, my cat, would sit on my lap and I would say, “Look what she’s doing now.”

What are you working on right now and what can your fans expect from you in the future?


Another Britt [Montero] novel and a sequel to Cold Case Squad. I also plan on writing several stand-alone novels. How many kids grow up and get to be exactly what they said they wanted to be? I feel very lucky.


On September 23, Ocala Style proudly presents a “Murder Mystery Dinner Gala” at the Ocala Hilton. Author Edna Buchanan will be the featured guest speaker, and the highest auction bidder at the gala will receive the most unique prize of all — a pivotal role in her upcoming novel. Attire is dressy casual; cocktails begin at 6:30pm. Cost is $150 per ticket or corporate tables can be purchased for $2,000. All net proceeds will be used to support the new downtown library’s enhancement fund and Marion Cultural Alliance. Call 369-1500 or visit mcaocala.com for more information.