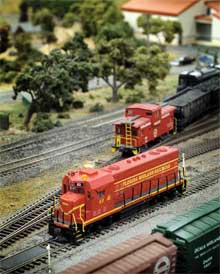 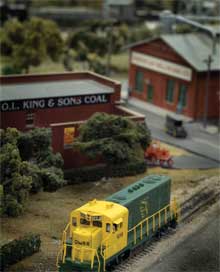 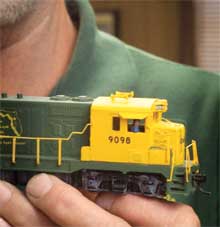 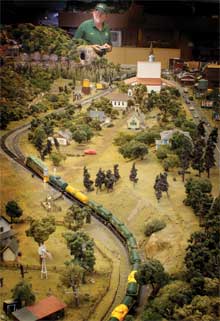 Just how popular is the annual Trains at the Holidays at the Webber Center? The model train exhibit is expecting its 30,000 visitor sometime during this year’s tenth anniversary celebration from December 17-December 31.

“It is definitely one of our most popular annual exhibits,” says Webber Center Exhibit Coordinator Jolene Gonzalez. “It’s only a two-week event and thousands come out to see the model trains displayed. We get many repeat visitors and many come from out of town. But the best part is watching the children’s faces light up when they walk in and see the trains.”

In anticipation of the 30,000 visitor to the exhibit, Gonzalez reveals there are special plans in the works.

“We are working on having a great prize for that milestone visitor,” she says, “as well as some kind of souvenir to commemorate the tenth anniversary of the exhibit.”

The Trains at the Holidays opening reception is set for Saturday, Dec. 17, from noon to 3pm. Keith Marr of Operation Lifesaver will be on hand to give a train safety presentation, as well as entertain with train songs. The exhibit will be open daily from 11am-5pm, except for Dec. 25. There is no admission charge.

The model train exhibits are provided by two local clubs, the Ocala 3 Railers and the Ocala Model Rail Roaders, as well as a few individuals.

Ocala Style recently visited with representatives of the two model train clubs about their popular hobby.

Elmer Butler has always loved trains. He was nine years old when he got his first model train set, a Lionel Scout engine with four cars.

That was the beginning of a hobby that has persisted for Butler, now 67, over six decades. He has what he says is considered “a small collection of 65 engines and cars,” plus dozens of scenery pieces to complete various town layouts.

“I think it’s nostalgia that attracts people to the hobby of model trains,” says Butler, who spent 31 years in the Air Force as an airplane crew chief. “A lot of people have that memory of a model train going around a Christmas tree and it just grows from there.”

Butler is particularly drawn to the 1940s-50s-era of trains and the towns that they made their way through. Represented in his collection are trains from the Florida Railroad, the East Coast Seaboard, and Atlantic Coast Line. His latest addition is the popular Polar Express line, made famous by the book and recent movie.

“I like both the freight and passenger trains,” he says. “But there’s more activity with the freight trains. You have more switches and sound effects.”

That being said, Butler admits there is a Seaboard passenger train that he hopes to soon locate and add to his collection.

“This hobby is not a stagnant one,” he says. “There are always new pieces, new layouts. You can go to trade shows and swap meets. There’s always something to do.”

“My wife, Georgia, is also a member of our club and she is really good at the detailed work of the layout,” says Butler. “It’s a great way for us to spend time together and share a common interest.”

And Butler is ensuring that the hobby continues through several generations of his family. He bought his son, Jon, a starter set before he was even born and gave grandson, Tristan, 8, his first Lionel starter set when he was two years old. Granddaughter Sierra, 6, just got her first model trains. Grandsons Chip, 16, and Joey, 14, have elaborate Harry Potter model train layouts set up at their homes in Tampa.

“It’s a great hobby for the whole family,” says Butler, smiling. “And it’s a great way to meet people who have similar interests.”

The Ocala 3 Railers have a permanent layout set up at Dan’s Train Depot, where the club meets once a week and visitors are always welcome to stop by. The club also has several travel layouts, which are used when they are invited to elementary schools.

“The kids really enjoy it when we come for visits,” says Butler. “They ask a lot of questions and are fascinated by the trains and the layouts.”

This will be the fourth Trains at the Holidays exhibit for the Ocala 3 Railers.

“We look forward to it every year,” says Butler. “It takes us about two hours to set up our layout there. And every year it gets bigger as we keep adding to it. The funny thing is that the regulars notice the new pieces to the layout, even if it’s just a new tree or one building. It makes you feel good that people appreciate our work and the trains.”

“My grandfather loved trains and so did my dad,” says Frisbie, 47. “I got my first train set when I was 10 from J.C. Penney’s. Later, I realized it was really my father’s and he just let me play with it.”

That first model set also included a racecar track, another favorite of Frisbie. Cars, not trains, became his primary focus through his teenage years and into adulthood. But while recovering from brain tumor surgery in 1988, Frisbie’s passion for model trains was rekindled.

“I saw an ad in the paper about a model train club,” he recalls. “That was in 1996 and I’ve been an active member ever since.”

Frisbie favors the steam engine era prior to the gradual conversion to diesel at the turn of the century.

“There’s just something special about the trains and that time,” says Frisbie. “There’s nothing like the sound of an old steam engine coming down the tracks. There used to be a real excitement in a town when a train was coming through.”

In addition to the standard model trains, Frisbie has a garden railroad set up in his backyard. The model trains for garden railroads are larger and utilize actual landscape elements as well as being the focus of a created town. Frisbie’s garden train includes a steam engine and as many as 20 cars, depending on how he sets it up. The layout includes two goldfish ponds, with the train going over one on a trestle and under another through a tunnel.

“I spend a lot of time on my garden trains,” says Frisbie. “I enjoy collecting new pieces and adding to it. It’s just another aspect of the model train hobby.”

Frisbie also likes the full-scale trains, never passing up the opportunity to ride a train while traveling.

“My wife, Bebe, and I are rail fans,” he admits. “We like to go up into the North Carolina and Georgia areas where there are still a lot of trains you can ride.”

At the Ocala Model Rail Roaders Clubhouse is a unique, two-room layout on permanent display. The Ocklawaha Valley model train display was donated to the club in 1999 by the family of the late Dr. William Chambers.

“It was so big that we had to take it apart in sections to move it to the clubhouse,” explains Frisbie. “In one room, we have it set up on a 16 by 21-foot table and then we cut a hole in a wall and it goes into another room onto an 8 by 12-foot table. It’s quite a display with a lot of detail. We are very fortunate to have it.”

Like their counterparts in other model train clubs, the members of the Ocala Model Rail Roaders strive for authenticity in their layouts. A prime example of that will be an exact scale model of the Ocala Union Station and Restaurant for the Trains at the Holidays exhibit at the Webber Center.

“We worked from photographs and it took six months to finish,” Frisbie proudly says of the layout. “It has two tracks, one for a freight train and one for a passenger train. We tried to get in as much detail as we could in the whole setup. We think people will really enjoy it.”

Clubs:
• For more information on the Ocala 3 Railers, contact Butler at 854-6176.
• The Ocala Model Rail Roaders always welcome new members to their weekly Tuesday night meetings, as well as having an open house every third Tuesday of the month. For more information, call 401-0747.