He’s a mix of humble beginnings and glittering stardom, youthful ambition and ageless achievement. On March 28, Glen will once again grace the stage at Ocala’s Silver Springs attraction. Do you have your ticket? 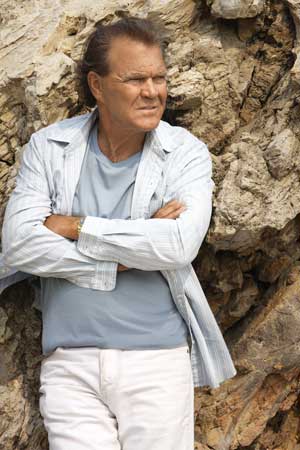 At age 24, Glen Campbell became a studio guitarist for such notables as Frank Sinatra, Merle Haggard, and Elvis Presley. He traveled with The Beach Boys and eventually embarked on a solo career that propelled him to the top of the charts.

Brooks Jordan, director of marketing for Silver Springs, is thrilled the popular entertainer will once again perform onstage at the park.

“We’re excited about bringing him back,” says Brooks. “I grew up in a small town in West Virginia and heard ‘Rhinestone Cowboy’ more times than I can count.”

In a recent phone interview from his home in Malibu, Glen Campbell talked to Ocala Style about his life, his family, and his love of music.

You’ve performed at Silver Springs in the past. What was your impression of this area?
It was fabulous. I like the outdoor stuff. I’d like to play golf when I get there.

Your Ocala fans cover a wide span of ages, from young families to retirees. How are you able to relate to such a diverse audience?
I go with the flow. If you do good music—I like good melody, good chord progression—you get people’s ears. It seems to have worked out for me.

You started life on a sharecropper’s farm. What was that like?
Our mode of transportation was a wagon and a couple of mules. That’s how we’d get around—Nat and Skeeter, little male and female horses, actually. We picked cotton, gathered corn. I learned to drive the cultivator when I was three. I fell off it once, but Dad was right there.

What are your fondest memories growing up as one of 12 children?
We were four boys and eight girls. Gerald, Shorty, Ronald, and I, we slept crossways on the bed. Of course, I was maybe two- or three-feet long then. I look back on that and have fond memories. Later I built ’em a house. We didn’t have electricity back then, so I bought them electricity. I remember when we got a TV. It was just awesome. 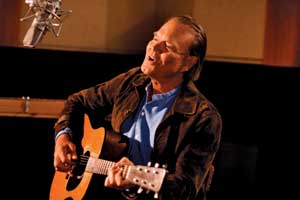 Was it tough to quit high school at 16 and take off on a music career?
I had made up my mind—I’m playin’ the guitar and I’m singin’ and that’s what I’m workin’ on. They were not learnin’ me what I wanted to do. I don’t want to see how far Spot runs. I never got into that E plus MC square. It’s all Greek to me.

So, did you ever go back to school and get a degree?
I got a degree in music. I learned to play whatever was comin’ over the radio. Some of it would be pop, but whether it’d be country or pop, it didn’t make any difference. I’d just look up into the heavens sometimes and say, “Lord, thank you. You really answered my dream.”

Did any of your songs make a personal impact on you?
“By the Time I Get to Phoenix.” It made me want to go home and see Mama and Daddy and my brothers and sisters. And “Rhinestone Cowboy.” I heard it on an album cut station in Louisiana. Here’s this guy singin’, “I’m a Rhinestone Cowboy.” That just blew me away. I went instantly into the studio. I didn’t want anybody else to hear it and get it first.

In addition to multiple country and pop hits, you also did a lot of Christmas albums and some Gospel music. How does the mix reveal who Glen Campbell is?
I always said I didn’t record a song I didn’t like. Most of the guys who play and sing, or who just sing, know just three chords, like Johnny Cash. He didn’t try to venture off in unexplored areas; he just did what Johnny Cash did. And that’s what I tried to do. I went out to California and went into studio work. That way, I got to play with the best musicians in the world. I got to play the best songs in the world. It was such a variety to go into “Strangers in the Night” with Frank Sinatra, then come out and play with Dean Martin.

You made your movie debut in True Grit, starring John Wayne. What was it like working with the Duke?
It was scary. He was so good, and I had never acted before. I called him Duke, and he called me “Glimp.”

Tell us a little about your family.
I found a soul mate in Kim. [We] have two boys and a girl. Ashley’s going to Pepperdine University; she graduates this year. The boys are doing their record now. Cal was playing drums when he could sit up. Shannon plays guitar [and] writes some of the best songs I’ve ever heard.

How do you account for nearly 50 years of nonstop popularity?
I bring something to the table every time. I like songs that make people think. The love songs—“I want, I need, I feel”—it’s those songs, I think, that are the hits. I like the gravy a little thicker than that, as they say back home, something with substance to it.

With such a hectic schedule, where do you find your moment of solitude?
I find peace of mind, I believe, in my Savior and Lord, Jesus Christ, and I go by that. I carry those beliefs with me. I am 72 going on 19. I say, “Lord, let me go at this pace. I love it.”