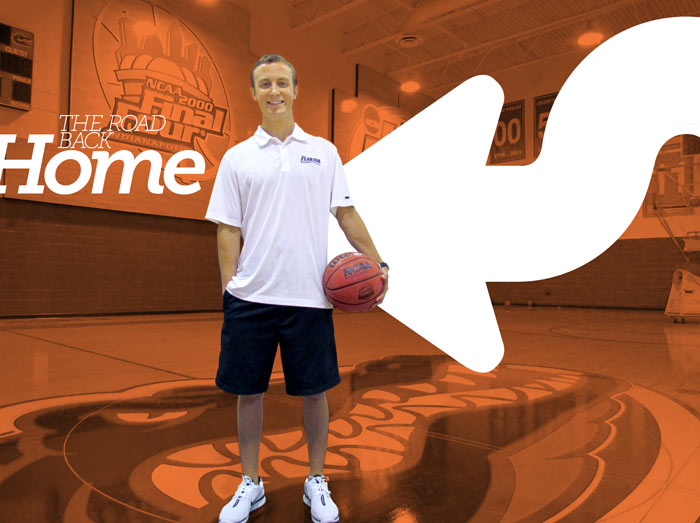 The road to success knows no short cuts.

At first glance, Matt McCall’s appearance belies this belief. Yet, in truth, he lives it every day.

In late April, the Ocala native was named the newest—and by 13 years, youngest—assistant coach on Billy Donovan’s Florida basketball staff. At 29, for an R-rated movie, Matt might still be asked to produce his ID. Likewise, his youthful look could easily cast a misconception that his has been a path, perhaps, less toilsome than others in the coaching community—the emphasis being on misconception.

In any line of work, it’s easy to profess to going the extra distance, but Matt literally begins each day doing just that. En route to his second-floor office within Florida’s pristine practice facility, the young coach takes the longer stairway winding through the front foyer. There, encased in glass, sits the purpose of his passage—two sparkling crystal basketballs.  The relics from back-to-back 2006 and 2007 national championship seasons are resplendent reminders of the ultimate goal.

“I could come up the back steps,” Matt says. “But I go through there every day because I want to see that and know that’s part of the motivation to get back there.”

“There” is a place of fortunate familiarity to Matt. Just as he hopes the national title one day will, Matt has made his own return to Gainesville.

In 2002, two years after graduating from Belleview High, the former Rattlers guard revived his hoops career as a student at Florida, albeit at a slightly different position. Matt seized the opportunity to assume, undoubtedly, the most thankless role on a college basketball team—the student manager—and ran with it. By 2003, he was head of student managers. The added title bore extra responsibility but also more of Donovan’s trust. Three years and a national championship later, he earned yet another promotion.

“In ’06, when we won it (the national championship), Coach Donovan brought me in and said he wanted to keep me on staff,” says Matt.

This time, Matt was named director of basketball operations. Hardly an astronomical rise from anonymity, but at least his efforts would be compensated. For two more seasons, he dutifully held the position until, finally, it was time to make a move.

“After 2008, I went to Coach Donovan and told him, ‘I’m extremely appreciative of all the opportunities I’ve had here and all you guys have done for me, but I want to do more,’” Matt remembers. “And then he said, ‘Alright, well we’ve got to get you a coaching job.’”

The next fall, the aspiring coach landed his first official title as an assistant at Florida Atlantic University under new Head Coach Mike Jarvis. His first year in Boca Raton, the Owls slumped through a 6-26 season. The next year, significant strides were made. Finally, this past season, Matt and company guided the program to an historic turnaround, going 21-11, winning the Sun Belt Conference regular season title and qualifying for post-season play with a berth in the National Invitation Tournament. The three years of working and, ultimately, winning validated all the effort along the way.

Combine that experience with the experience of being Donovan’s right-hand man through two trips to the peak of the college basketball’s profession, and it’s no wonder Billy brought him back.

“For me, being here for 15 years, now going on 16, the thing that was really important to me was familiarity,” Donovan stated at his April press conference introducing Matt, as well as Associate Head Coach John Pelphrey and Assistant Coach Norm Roberts. “I think for Matt… as a young guy that can make the kind of investment it requires personally, but also understanding what Florida means, what Florida is about and him being here for that seven-year period also means a lot to me.”

Coming back to Gator Country, the place where he was born, raised, educated and trained means a lot to Matt, too. Although, he’s been so consumed by work, he admits it’s hardly had time to sink in.

“It’s been a little bit of a whirlwind,” he admits. “Getting up here, getting to work, trying to get organized, it’s almost been like hitting the ground running. I haven’t really had a second to breathe and say, ‘Whew, I’m excited,’ but obviously, I am ecstatic to be here.

“I tell people all the time, that South Florida stuff was not for me,” he adds.

“I’m more of an Ocala/Gainesville guy.”

Rare are the opportunities to perform one’s craft on such a visible platform while still surrounded by home. No surprise, Matt is up for the challenge.

“There’s a chip on my shoulder because I’m sure that some people might think I’m too young or ‘This guy’s more qualified or that guy’s more qualified,’ but it’s more than that, because this is the career that I chose. I want to be a head coach. I love the University of Florida. I will be at the University of Florida as long as it takes and as long as Coach wants me here, but eventually, I want to be a head coach. This is a huge step for me, being here now, being with him and being in this role. I’m close to that opportunity, but it would have to be the right opportunity for me to leave such a special place.”

When that right opportunity eventually comes along, Matt will have arrived at that destination the same way he has his current one.