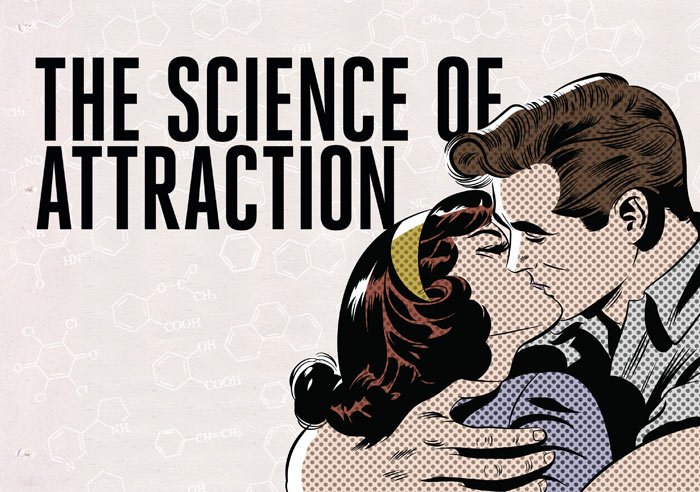 Ladies, do you just melt over bulging biceps? Gentlemen, do you go weak in the knees over a damsel in distress? Have you ever stopped to think why you are attracted to that special someone? You can chalk it up to that hourglass figure or his manly muscular physique, but scientific studies show there may be more to attraction than just what meets the eye.

Women want “tall, dark and handsome,” right? And we all believe there are certain attributes on a woman’s body that men prefer to see more, shall we say, prominently than others (think 36-24-36 measurements here). Why is that? Who came up with these standards of perfection? For decades, men and women have tried to embody a certain image in order to attract the opposite sex. Whether it be primping in front of a mirror for hours, hitting the gym five days a week or undergoing surgical and cosmetic enhancements, it seems people will do whatever it takes to attract a mate. But you may be surprised to find you actually don’t have much say in which features you are attracted to.

Think about it for a minute. Why is a woman, like the iconic Marilyn Monroe, considered such a sex symbol? And, why do the leading men in films always stand taller than their female costars—even if this is not the case in reality? Overtly feminine curves and the height and breadth of a man are the qualities we as a society find attractive in the opposite sex. Men are supposed to be taller, broader and stronger, and women are supposed to be more delicate and gentle. But before you blame Hollywood and fashion designers for the unrealistic standards they’ve placed on society, there’s something you should know. They aren’t that far off the mark, and there is actually plenty of research to help us understand the science of attraction.

The Face of Love

Those eyes, those lips… why do we fixate on certain facial features? And what do our faces tell us about our fertility?

Even though we continuously preach that beauty is on the inside, we can’t deny that beauty is in fact on the outside, too—and most notably, in the face. Facial features are often the first traits people notice about one another. But what attracts us to potential partners is more than the right eye liner or donning a sexy goatee. You may have heard that facial symmetry can determine an individual’s appeal or attractiveness. And it’s certainly hard to argue this theory given that two of the most symmetrical faces on the planet happen to belong to Brad Pitt and Angelina Jolie, according to the results of a study published on cnn.com.

With that said, there is more to attraction than the symmetry of your face. (Thank goodness because most of us can’t compete with Brad and Angelina!) Research shows that aside from the symmetry of facial features, members of the opposite sex are subconsciously attracted to traits not seen by the human eye: the potential to produce healthy offspring.

According to an article published on livescience.com, J. Philippe Rushton, a psychologist at the University of Western Ontario, found that higher levels of estrogen in women and testosterone in men correlated with more desirable facial features. For example, in Rushton’s study, women with higher estrogen levels often had smaller bones along their chin and brow line, creating the appearance of larger eyes and higher cheekbones. Men with higher testosterone levels often had a larger jaw line with a more prominent brow, suggesting that it may not be the facial features we’re attracted to as much as the levels of sex hormones.

Rushton also found that women’s faces were considered “more symmetrical” by men during their most fertile periods, when they were ovulating. In another study by psychologist David Buss, men’s preferences for younger women were based on the theory that they likened youth to fertility. He also concluded that during ovulation, women were most attracted to larger and more mature men because they likened those characteristics with better protective capabilities.

Ever notice that a woman’s voice tends to raise an octave or two when she’s flirting? Why do guys fall for it? The answer is that it may not actually be their fault.

In a study on sexual attraction published on cnn.com, Dr. Laura Berman, a sex therapist, concluded that hormone levels corresponded with the attractiveness of individual voices to the opposite sex. Women with a higher level of estrogen were found to have higher, more feminine voices (think Marilyn Monroe’s rendition of Happy Birthday here), while men with higher testosterone levels spoke with a deeper, more rugged pitch. And while that high frilly tone may seem obnoxious to other ladies present, most can’t help hitting that same note when a potential mate strikes up a conversation. According to Berman, we can thank our subconscious mind for that. The part of us that wants to reproduce will stop at nothing to attract a mate by showing off our fertility, even though our conscious brain may tell us something different.

But in some cases, our brain—conscious or subconscious—doesn’t even have to get involved at all. Our bodies will dictate our flirtatious behaviors. Interestingly enough, Berman found that men rated a woman’s voice most attractive when she was in the most fertile part of her menstrual cycle. The reason being, when a woman’s estrogen level is highest at mid-cycle, her voice hits its highest pitch.

Even more interesting, the women in the study who were in mid-cycle were most attracted to the men with the highest testosterone levels (based on their voices). Deeper voices could be suggestive of a larger, more rugged individual. And in the subconscious mind of a fertile woman, this means a more protective male to care for her and, more importantly, her offspring. 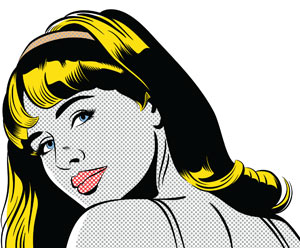 You’ve seen the face. You’ve heard the voice. Now it’s time to check out the body. But before you can even process the figure in front of you, your subconscious mind may have already determined your level of attraction.

Walk into any fitness center and chances are you’re going to see groups of women twisting themselves into pretzels doing the latest ab exercises, while the guys in the room are pumping iron in an effort to bulk up. Is this the effect the super-slim fashion models or mega-muscled Mr. Universes have had on our thinking? Not according to scientific research.

According to an article published on livescience.com, a 2004 study conducted by psychologist Devendra Singh of the University of Texas concluded that men found women with a low waist-to-hip ratio (narrower waists and larger hips) to be the most attractive. At the same time, Singh concluded that women found men with narrower waists and hips and broader shoulders to be most attractive.

What does this mean? It doesn’t suggest that women should start shrinking their waistlines to attract a man. According to Singh’s findings, the attraction to a specific body shape is based, once again, on the subconscious mind’s effort to find a partner capable of producing healthy offspring. Singh’s study concludes that where fat is stored on the body is directly related to the levels of sex hormones a person has. Women with higher levels of estrogen deposit fat in the hips, and higher estrogen levels are a subconscious clue to a man that this particular woman is fertile.

At the same time, men with higher testosterone levels tend to carry more muscle mass on their shoulders and less fat on their abdomen. So, once again, Singh points out the subconscious attraction to those who have better potential for producing offspring.

Interestingly enough, a recent article published on cnn.com claims that studies prove women in the ovulation phase of their cycles were more attracted to broader, bigger and more “rugged” men than women who were in less fertile phases. The study also noted that women bought and dressed in sexier clothing when in the most fertile phases of their cycle.

You’ve heard the saying, “opposites attract,” a million times. But it turns out, your body is checking out more than her figure—it’s checking out her DNA as well.

He sleeps in; you’re up at the crack of dawn. He stays out until the wee hours of the morning; you’re in bed before the 10 o’clock news. Yet, you are a match made in heaven, because, as studies show, opposites really do attract. Whoever came up with this idea was right on a far more minute level than bedtime preferences.

In a 1996 study, aptly nicknamed the Stinky T-shirt Study, men were instructed to wear the same undershirt for two nights straight. Women were then instructed to smell the shirts and select the ones they liked the most. (Kinda gross, right?) The study showed women are most attracted to the shirts of males with different genetic immune system makeups than their own. And in an effort to test the study’s findings, this study has been performed several times since 1996, and similar results were yielded after each test.

What does that mean? It’s a scientific fact that the healthiest offspring will be born from parents with different immune system genes. Where one genetic makeup is weak, the partner’s is strong, thus giving the baby the strongest possible makeup.

So, how can you scout out a strong immune system? Turns out you don’t have to. Your body can pick up on chemical signals called pheromones, which are a clue to your partner’s suitability as a mate for you. In an effort to capitalize on this, perfume makers tout that certain products will have that special someone falling madly in love with you at first site. Researchers, however, aren’t so sure that man-made pheromones will have the same effect.

Pheromones are highly complex organic compounds that all animal species use as a means of communication. Humans are highly specialized creatures that can communicate via language and visual cues, so pheromones aren’t quite as necessary to us as say an ant. And some research suggests that synthetic hormones can actually interfere with our ability to interpret certain pheromones, which may be why people find themselves falling out of love if they change or stop a certain medication.

Although this study isn’t meant to suggest that you should base your relationship on your attraction to your partner’s worn laundry, if you have that “gut feeling” about someone, you may want to follow through with what your body is telling you.

Although scientists will always look for the “why” factor, everyone loves a good romance.

Is there any one answer for why we fall in love with who we fall in love with? New studies will always seek the latest findings, and people will always get caught up in the latest theories. Fortunately, a love story is classic throughout the ages. But the next time you meet that special someone and fall head over heals at first sight, take a minute to think of the science behind true love.

Editor’s note: Polls conducted by Ocala Style via Facebook for the purpose of this story are not considered scientific and may not accurately represent the views and opinions of all Ocala Style Facebook fans.