Nikolay Timofeev, the aerobatic aviation equivalent of a Triple Crown Winner, now lives and flies out of Ocala. He recently took one ecstatic writer for the ride of her life.

On a clear, cool morning with a sky void of clouds, I turn my head to the left and watch as the horizon smoothly rotates a seamless 360 degrees.

Moments later, the plane soars into a graceful loop and I experience the rush of looking straight down at an expansive patchwork of countryside as the plane rushes earthward before climbing again.

Growing up in Tucson, flying was nothing unusual for me. Many afternoons were spent in a small plane—we took Sunday flights the way other families took Sunday drives. My father had his private pilot’s license and my mother was squadron secretary at the A-10 Training School at Davis-Monthan Air Force Base. My middle brother became a pilot and an air traffic controller. 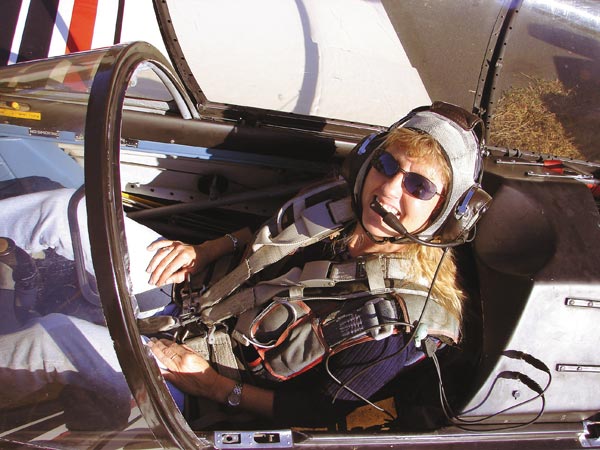 In my childhood, flying managed to be both hallowed and commonplace, but that still didn’t prepare me for the exhilaration—not to mention the G-forces—of flying in a high performance aerobatic plane. The fact that this particular plane was under the control of three-time World Unlimited Aerobatic Champion Nikolay Timofeev made this a once-in-a-lifetime event.

If passion for flight is hereditary, Nikolay comes by it honestly. His father was a seasoned Russian air force WWII fighter pilot who had 19 victories in air battles and was twice shot down. Nikolay thought flying was his destiny, although his father tried his best to convince him otherwise.

“After five years of dogfights,” recalls Nikolay, who was born in St. Petersburg, Russia, in 1956, “he didn’t want me to be a pilot because he knew all sides of a real pilot’s life.”

His father succeeded in talking young Nikolay out of flying, but that didn’t last long. By 16, Nikolay could no longer deny his attraction for flight and joined an air club from a newspaper advertisement. He continued taking flying lessons as a full-time student in mechanical and electrical engineering at Polytechnic University.

“At that time in Russia, the government would pay for these activities, so it was a good opportunity for me,” he says. “In just two semesters I was flying solo.”

After graduation, Nikolay went to work as an electrical engineer at the Scientific Research Institute in St. Petersburg, but his day job never kept him out of the cockpit. He entered his first aerobatic competition in 1979. His primary goal was to excel in the field of engineering, but after he took third place in a national aerobatic competition in 1981, things changed rapidly.

“A main coach approached me and asked me to be a pilot on the Russian National Aerobatic Team,” recalls Nikolay, who was just 25 at the time. “I knew I had a good future as an engineer with the Institute, but this wasn’t a hard decision. It took me five seconds to say yes!”

Nikolay flies a Sukhoi SU-26, widely considered the most agile craft in the airshow world. Manufactured by the Sukhoi Design Bureau in Moscow, the SU-26 has a wing load factor of 23 G’s and features a 400-horsepower, nine-cylinder engine. The first prototype was flown in 1985 and the plane went into serial production some five years later. There are only about 73 Sukhois in the world, with the majority in the United States. It’s a plane with which Nikolay is intimately familiar, having been one of the engineers responsible for its design and development.

Nikolay’s decision to move to this country was greatly influenced by Steve Morse, an aerobatic pilot who happens to be the lead guitarist for the group Deep Purple. Morse flies a YAK 55, and began training with Nikolay in 1998.

“We’re like twins, even though we lived thousands of miles apart,” says Nikolay. “Steve thought I would do well here.” 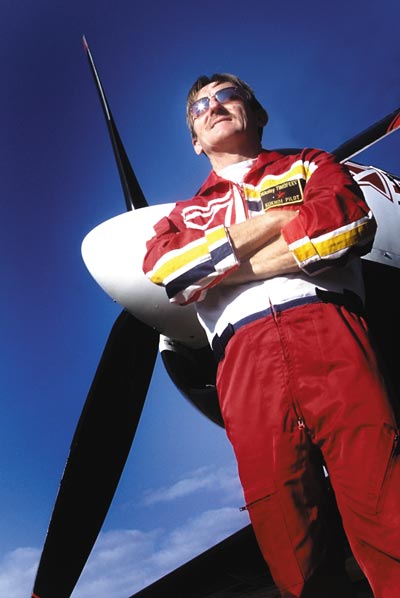 “He called and said he found great property that already had two hangers just waiting for me,” Nikolay remembers. “It was tough to decide to cross the Atlantic.”

He needn’t have worried. Both his son and daughter have adapted well and have recently earned degrees from the University of Florida.

Nikolay is proud of the fact that soon he will become an American citizen, and makes an effort to give back to the community he now calls home. He’s given performances for Camp Wings, a weekend camp for area youth interested in flying, and donated a one-hour flight to the Hale Academy auction last year.

Nikolay considers himself fortunate to make a prosperous living doing what he loves—performing in air shows, coaching aerobatic pilots, holding training camps around the world, and maintaining high-performance aerobatic planes. He also serves as a liaison between the Western Hemisphere and the Sukhoi Design Bureau in Moscow, where he still has many friends.

“My forte has become my business,” he notes. “I feel I’m doing something I was born to do.”

Call him a perfectionist. Nikolay won’t mind. His tendency for perfection and attention to detail are absolutely beneficial in a career where the most minute details can be critical.

In an average week when he holds training camps, Nikolay will fly about 10 hours. While that’s nothing for an airline pilot, it’s substantial for an aerobatic pilot. All those G-forces take a toll on the body and an aerobatic pilot must be in good physical condition. Nikolay maintains a regular exercise plan to stay in shape and admits his “physical trainer,” his dog, Junie, is a motivating force for his daily runs.

Listening to Nikolay talk about flying, it’s obvious he’s completely in his element when he’s off the ground. He describes his brand of powerful, precise flight as performing an aerial ballet to a Tchaikovsky symphony. Watching his plane gracefully tumble, roll, plummet, and soar, that description makes perfect sense.

Three world championships haven’t gone to his head, though. Humble and gracious, he won’t say he’s naturally gifted but insists he’s simply spent many years training and honing his skills.

“In this cockpit, you can do everything you can think of with just a stick and this machine. It gives you a ‘wow’ feeling,” he says, searching for English words to match the emotion he’s thinking in Russian.

No matter. He doesn’t need a better word. After my flight, I’ve already realized words aren’t quite adequate to describe certain experiences. Yet as I drive homeward, the lines of “High Flight,” long a favorite poem, suddenly come to mind and I find myself smiling. Although written by a fighter pilot, its stanzas could just as easily have been penned by an aerobatic pilot.

“Oh! I have slipped the surly bonds of Earth and danced the skies on laughter-silvered wings… I’ve chased the shouting wind along, and flung my eager craft through footless halls of air… Put out my hand, and touched the face of God.”

No wonder Nikolay Timofeev considers himself a fortunate man.