Many horses like to play with a Jolly Ball, a large rubber ball that has a handle. They kick it, swing it and generally have lots of fun with it. And sometimes, their owners teach them to fetch—or at least this one did. 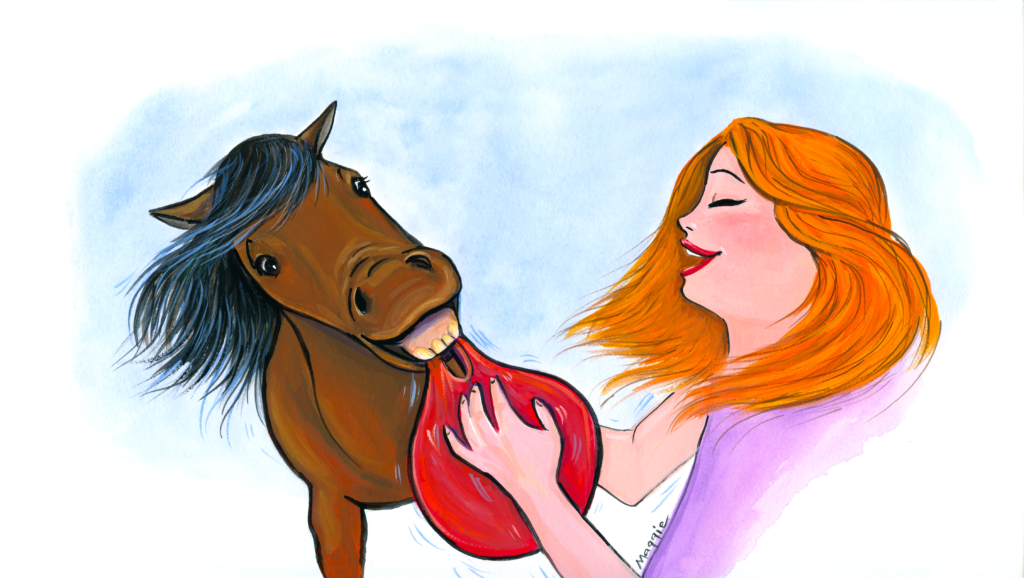 The thing about horses is, they all have their own personalities. Some are naturally calm, some are hyper and most are smart. In Intrepid’s case, he’s a bit too smart. Sometimes—actually, most times—we’re pretty sure he is smarter than we are.

I could see how bored and uninterested he was when he wasn’t in training or playing outside, so, to cheer him up, I gave him a Jolly Ball. He loved it! He was constantly swinging it around and tossing it in the air. It was really fun to watch, but one day, I had an idea.

I didn’t learn to ride and wasn’t even around horses until I was in my late 30s. The only point of reference I had for them was training dogs, so I decided to apply that knowledge to teaching Intrepid to play fetch. Unfortunately for me, getting this horse to give up his ball would prove to be no easy task.

One day during our daily tug-of-war battle, he willingly gave me the ball. I stood for a second and then tossed it back to him. He stared at it. A few moments after my wild gesticulations and verbal begging, he seemed to understand that I wanted the ball back, and he brought it to me. I tossed it again. After more jumping around and cajoling by me, he brought it back. Voilà! We had a game.

One day I showed up for our daily session of fetch, but Intrepid had other ideas. He tossed the ball out of his stall window when he saw my car pull up to the barn. You know, now that I think about it, I’m not sure who was training whom. But I digress.

I tossed him the ball, but when he brought it back, he held onto the handle. I pulled on the ball, saying “drop it” (it worked with the dogs), but he didn’t budge. He pulled it out of my hands and probably laughed inside.

I was getting tired now, but still had a little oomph left in me. The next round of tug I was ready. I planted my feet, grounded my heels and pulled with all my might. We struggled. I held firm. And then… I won! I’m not sure if you’ve ever seen a horse with a bad attitude, but it seemed at that moment that the realization that he had just lost sunk in, and he didn’t like it one bit.

Suddenly, he reared, bucked and started spinning in anger. I was safely outside of the stall, holding the Jolly Ball, and his antics made me laugh. The more I laughed, the angrier he got. What a sore loser! Finally, he came to the window, and I rubbed his head. Ever the peacemaker, I handed him the Jolly Ball. He took it, gave it a good shake, turned his back to me (insult!) and never, ever, played with me again.