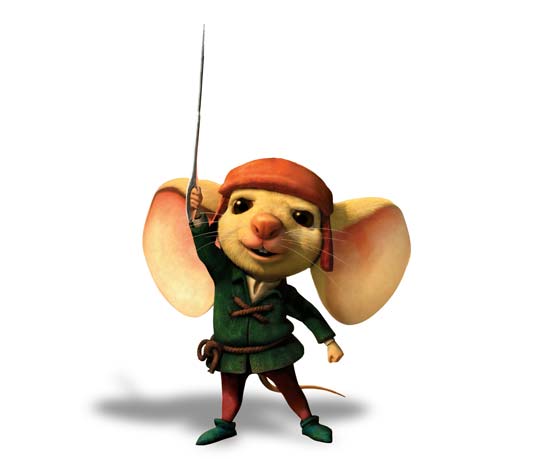 ABOVE: The Tale of Despereaux, an animated movie based on Kate DiCamillo’s
award-winning book, opens in theaters on December 19.
Images Courtesy of Universal Studios

Award-winning children’s author Kate DiCamillo credits growing up in nearby Clermont for giving her stories a Southern voice and a Florida friend’s son for giving her the idea about an unlikely hero. During a recent rare interview with Style magazines, the popular author discussed the movie version of The Tale of Despereaux, the importance of personal journeys, and what writing means to her.

When The Tale of Despereaux opens in theaters on December 19, movie-goers in Central Florida should note that the modern-day fairytale didn’t really originate in the faraway kingdom of Dor as the movie suggests, but rather in the creative and whimsical imagination of their own native daughter Kate DiCamillo.

Although she was born in Philadelphia, Kate moved to Clermont when she was five with her mother and brother because doctors had prescribed a warm climate as the remedy for Kate’s frequent bouts of pneumonia. Kate says she instantly fell in love with the community, where “people talked more slowly and said words I had never heard before, like ‘ain’t’ and ‘y’all’ and ‘ma’am.’” 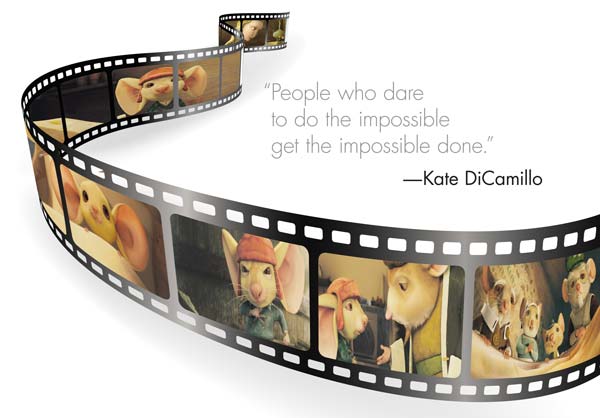 She credits then small-town Clermont with giving many of her stories, particularly her first book Because of Winn-Dixie, a Southern voice. The book won several prestigious awards including the 2001 Newbery Honor for Children’s Literature and the Southeast Booksellers Association’s Children’s Book of the Year. The book later became a critically acclaimed movie in 2005, starring Jeff Daniels, Cicely Tyson, and AnnaSophia Robb.

“The bouts with pneumonia turned out to be a blessing,” she says. “If I hadn’t grown up in a small Southern town, I wouldn’t have gotten the wonderful experiences that helped create that book.”

Because of Winn-Dixie chronicles the life of 10-year-old India Opal Buloni, who moves to the fictional town of Naomi, Florida, where she finds a dog inside a grocery story. Opal names the dog “Winn-Dixie,” and they learn about acceptance and new friendships from a colorful array of characters. Kate calls the book “a hymn of praise to dogs, friendships, and the South.”

With her third book, The Tale of Despereaux, about to open as an animated movie later this month, Kate remains humble about her life and her writing. She says things really haven’t changed all that much.

“I still get up every morning and write; I still take the dog on long walks; and I still laugh and eat with friends,” she says. “But every once in a while, I turn my head and look at all the amazing things that have happened to me. I just shake my head in disbelief and wonder.”

The Tale of Despereaux is the story of Despereaux Tilling, a funny-looking mouse who is in love with music, stories, and a princess named Pea. The whimsical, yet classic story about good and evil won the 2004 Newbery Medal, the most prestigious and coveted honor for children’s literature. The animated film by Universal Pictures will feature the voices of Matthew Broderick as the heroic mouse Despereaux, Dustin Hoffman as the somewhat villainous rat Roscuro, Emma Watson as Princess Pea, and Tracey Ullman as the misguided servant girl Mig.

Kate believes the major themes of the story—bravery, courage, love, and forgiveness—are constants in children’s and adults’ lives.

“Despereaux is different in every way, but he doesn’t care that he’s different,” she said recently in a behind-the-scenes movie trailer. “We all feel small and that the task before us is virtually impossible. However, people who dare to do the impossible get the impossible done.”

She wrote the book “on command” because her best friend’s son, Luke Bailey of Orlando, asked her to write a story for him about an unlikely hero with big ears. When she asked the then 8-year-old Luke what happened to the hero, he replied he didn’t know but that was why he was asking her to write the story—so they could find out together.

She was called to Hollywood to brainstorm with visionary filmmaker Gary Ross and others before work on the movie began. They kept her in the loop, giving her sneak peeks and behind-the-scene glimpses.

“It’s been wonderful,” she says, “and a magical world that I get to journey to now and then.”

Kate currently lives in Minneapolis, but she often returns to the Orlando area to visit her best friend and Luke’s mother Tracey Priebe Bailey, who also grew upin Clermont.

“When we were growing up, it was all citrus farming and orange groves as far as the eye could see,” Kate remembers. “It always surprises me to drive down Highway 50 and not see those trees and that world.”

Tracey says Kate has always been quick on her feet and a lot of fun.

“We get together a couple times a year, and I’ll be with her in early December in New York,” says Tracey. “I think we’ll see The Tale of Despereaux together, and then I’ll come home and see it with my kids.”

Tracey’s son, Luke, is now 16 and a junior in high school.

“He thinks it’s cool that his idea for his Aunt Kate’s book is now a movie,” says Tracey, “but he’s very low-key about it.”

Kate graduated from the old Clermont High School in 1982, and then received a bachelor’s degree in English from the University of Florida. On her website, she credits Trey Greer—who was then a graduate assistant teaching a junior level non-fiction writing class—with helping her to understand that writing is all about seeing and paying attention to people and details.

Before taking that class, she said she didn’t want to see the world, but rather “I wanted the world to see me.”

Dr. Creed Greer III, who is now associate director of UF’s Dial Center for Written and Oral Communication, says that particular course was a turning point for him as well.

“The class brought together a simple and open method of teaching with a philosophy of being in the world,” he explains. “Kate’s work helped bring those two things together. She could see characters clearly even then.”

Although Kate is classified as a children’s author, her books and stories have a definite appeal to adults as well. Another of her favorite UF professors, Dr. John Cech, says that it’s quite rare and only the very best children’s books manage to engage both adults and children.

“Kate doesn’t dumb down her work to kids or to adults,” says Cech, who is the director of UF’s Center for Children’s Literature and Culture. “Each of her books is, in a sense, a soul’s journey. Adults are still kids somewhere inside, and we don’t stop loving these moving voyages because we get older. In fact, her stories are just as appealing and just as necessary to us with age—perhaps more so because we know how fragile it all is.”

Kate’s own quest to become a published author sounds like a modern-day fairytale about a young woman who didn’t always grasp the enormity of her talent or what being a writer meant. It was several years after she graduated from UF before she actually put words on paper.

“I wanted to be a writer,” she says. “I realized I had to quit talking about writing and start doing it.”

She promised herself that she would write two pages every day before work, and she woke up at four in the morning to keep that promise. At the time she was working in the children’s section of a book warehouse, where many of the works piqued her interest.

She also was homesick for Florida and experiencing the worst winter on record in Minnesota. And for the first time in her life she didn’t have a dog because her apartment did not allow them.

“There weren’t any rules about imaginary dogs,” she remembers. “So I made a dog up, the best dog I could think of: a smelly, friendly, big old mutt. I named him ‘Winn-Dixie.’”

She eventually gave her Winn-Dixie manuscript to a salesperson from Candlewick Press who promised to deliver it to an editor. The sales rep kept her word, but the editor left the company shortly afterward. Kara LaReau, then an editorial assistant, was cleaning out a box of manuscripts months later when she “discovered” Kate’s work.

“She championed the book from the beginning,” remembers Kate. “It was her first book to edit, and it turned out to be marvelous for us both.”

The book was published in 2000, and a few months later the American Library Association’s Newbery Committee called to tell her that it was being honored. Three years later, the committee called with even better news. Her third novel, The Tale of Despereaux, had won the ALA’s highest honor—the Newbery Medal, which is given annually for the most distinguished American children’s book published the previous year.

Kate’s books always include unlikely heroes who must find courage as well as acceptance. She says that she wasn’t a brave child. Her latest book, Louise, The Adventures of a Chicken, is another instance of writing about a brave, unlikely hero.

“Louise longs for adventure,” says Kate. “And she bravely sets sail in search of it.”

Kate doesn’t describe herself as a novelist or children’s author, but rather a storyteller. And she still faithfully writes two pages a day, five days a week. She also feels incredibly lucky and happy that she gets to tell stories for a living.

“Stories and books,” she reveals, “gave me courage and allowed me to dream.”

Kate DiCamillo’s uplifting stories of friendship, adventure, and love ring true for readers of all ages. Here are a few titles to remember the next time you’re at the bookstore: 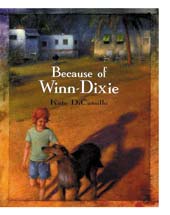 Because of Winn-Dixie, 2000. India Opal Buloni’s adventures with a dog named Winn-Dixie enchanted both young readers and adults everywhere with its down-home descriptions and uplifting story of friendship and hope.

The Tiger Rising, 2001. This tale is about 12-year-old Rob Horton who encounters a tiger pacing back and forth in a cage. On the same extraordinary day, he meets Sistine Bailey, a girl who shows her feelings as readily as Rob hides his. As they become friends, Rob and Sistine prove that some things—like memories, heartaches, and tigers—can’t be locked up forever.

The Tale of Despereaux, 2003. This story about a mouse, a princess, some soup, and a spool of thread came about because Kate’s best friend’s son asked her to write a story for him about an unlikely hero with exceptionally large ears.

Mercy Watson to the Rescue, 2005. This is the first in a six-book series for early chapter-book readers about a porcine wonder who loves to ride in a car and has inspiring adventures. Written with simple vocabulary and lots of repetition, the quick-paced stories flow gracefully and are packed with amusing moments to keep young readers entertained. 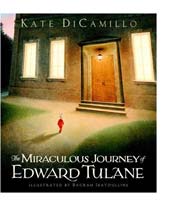 The Miraculous Journey of Edward Tulane, 2006. An arrogant china rabbit embarks an accidental yet extraordinary journey that takes him from the depths of the ocean to the top of a garbage heap to a hobo’s fireside camp to the bustling streets of Memphis. Along the way, he learns to love, lose, and love again.

Great Joy, 2007. A picture book for younger readers, Great Joy is a compassionate story about an organ grinder, a monkey, and a little girl named Frances who can’t stop thinking about them, especially after she sees the man and his monkey sleeping outside on the cold street. 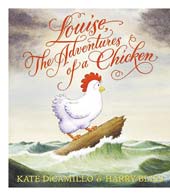 Louise, The Adventures of a Chicken, 2008. A not-so-chicken chicken leaves home and ventures into the world where she meets marauding pirates on the majestic seas, a ferocious lion under the lights of the big top, and a mysterious stranger in an exotic and bustling bazaar.