In the United States, watermelon is synonymous with summer. What would lazy, hot afternoons spent by the pool be without this popular fruit? 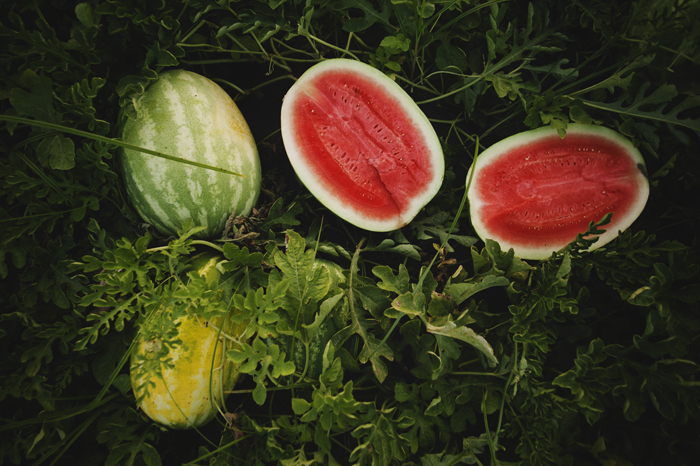 Or wait, is it a vegetable?

Botanists label watermelon a fruit because it is grown from seed, has entirely edible flesh, no core and is the result of fertilization. On the other hand, many people call watermelon a vegetable based on planting and harvesting techniques.

One thing is certain, whatever you call it, watermelon is the country’s most popular melon, with the average American eating 14 to 15 pounds per year. Incredibly hydrating, low in fat and rich in nutritional benefits, watermelons accounted for $2 billion in retail sales in 2016.

Across the Sunshine State, approximately 21,000 acres are used to grow watermelons. Florida is consistently among the country’s top four producers, along with Georgia, Texas and California.

But if you think watermelons are all the same, think again. There are hundreds of varieties.

“About two dozen of those are the most popular commercial types. Most have been bred from the older heirloom varieties. Today’s watermelons are all hybridized, meaning the varieties are cross-bred to make them hardier,” says Lee Wroten, a third-generation watermelon grower, whose Moorehaven Melons is located in Moorehaven, Florida.

Those varieties have names; some are even named after Kentucky Derby-winning horses, like Secretariat and Charismatic. Here in Florida, types such as Exclamation, Embassy and Super Seedless are popular.

Speaking of seedless watermelons, they accounted for roughly 92 percent of all retail watermelon sales in 2016. Developed in the 1980s, they didn’t start taking off with consumers until the late 1990s and now make up the bulk of watermelon sales.

“In order to have a seedless watermelon, you have to pollinate that plant with a seeded watermelon,” says Wroten, who compares it to crossing a donkey with a horse to get a mule, which is a sterile hybrid and not able to reproduce itself. It’s the same with seedless watermelons.

In addition to seedless and classic seeded watermelons, there are also mini or “personal” melons that only weigh a few pounds each. Watermelons with yellow and orange flesh are also gaining in popularity. Typically sweeter than red-fleshed melons, the yellow- and orange-fleshed varieties allow for greater variations in recipes.

Although many watermelon varieties have a similar outer appearance, there are noticeable differences in color (lighter and darker skins), and some are rounder, while others are oblong in shape.

“As a grower and shipper, my personal preference is the more oblong shape,” says Wroten. “They fit better in the bins and seem to hold up better and not bruise as easily as round varieties.

“Our goal is to ship about 4,000 loads each year; a semitruck is one load, and each load holds 56 of those big cardboard watermelon bins you see in the grocery store,” says Wroten, whose Moorehaven Melons farms some 850 acres and, as a broker, also contracts with other growers in Florida and Georgia, for a total of about 3,000 acres in watermelon production. This extensive acreage is necessary to meet the demands of their retail customers, which include Wal-Mart, Costco, Sam’s Club and others. 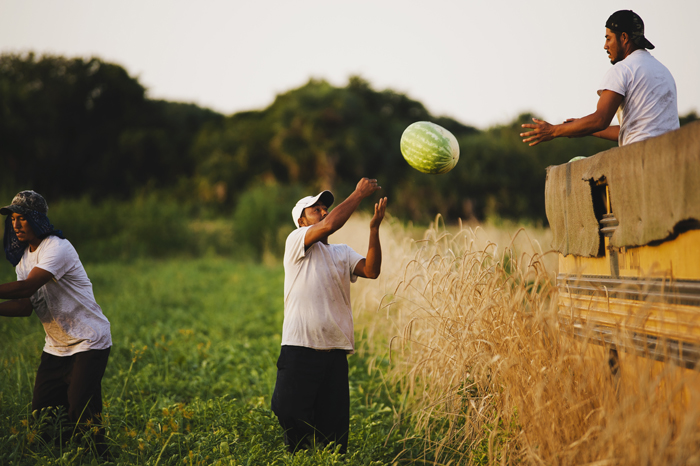 In Florida, the average time from planting to harvest is 90 days, although this varies depending on weather, daylight hours and soil fertility.

Seeds get a protected start in greenhouses in December and are then transplanted into the fields when they are about 2 to 3 inches tall, which is about mid-January in South Florida and early February in Central Florida.

Those tiny seedlings are planted in holes poked into biodegradable black plastic that covers the raised beds, which are approximately eight inches tall and 30 to 36 inches wide. Rows are about 12 feet apart. Eventually, the vines spread out and cover the beds.

“The plastic heats the soil around the plant’s roots to help it grow and keeps the weeds down. It also helps retain moisture, as well as repel moisture from big rains,” notes Wroten.

Growers often plant in fields that are laser leveled with a slight drop every 100 feet so rainwater doesn’t stand in the field.

Given that a watermelon is about 90 percent water, you’d think they love soggy soil, but that’s hardly the case. Wroten notes that watermelons thrive in light, sandy soil.

“Watermelons are really a desert fruit descended from wild melons that grew in the Sahara Desert,” he explains. “Watermelons don’t like ‘wet feet.’ They need a certain amount of water, but too much is detrimental. Watermelon vines have a main tap root and feeder roots. If those get damaged, the plant can’t feed itself properly. Too much water and the melons can soak it up and decay quickly.”

That said, most growers have some form of irrigation so they aren’t wholly dependent upon rainfall. In South Florida, seep irrigation is common, using a system of canals that channel water from Lake Okeechobee into the fields. Farther north in the state, growers use drip or pivot irrigation.

When weather patterns are normal, harvest in Florida begins in April (South Florida) and May (Central Florida) and lasts about four weeks. Given this year’s mild winter, Wroten says harvest is a little earlier than normal.

In a world where technology runs so much of our lives, watermelon harvesting has been done the same way for centuries: manually—as in, by hand. Old, repurposed school buses are commonly used to take the watermelons from the field to the packing facility, although in a few areas, tractors and wagons are still utilized.

One part of the harvesting crew goes ahead in the field, walking the rows and cutting the vines off the ripe melons, then flipping them over “belly up” to indicate they are ready. The “belly” is the pale spot on the underside of the melon where it rested on the ground while growing. When the watermelon is ripe, this spot will be creamy white or pale yellow and the melon has a full, rounded appearance.

The pickers then walk along, forming a human chain, as they pick up the ripe melons and toss them up to handlers in the buses that are driven slowly between the rows.

Once full, the buses head for the packing facility, where melons are off-loaded onto a series of conveyor belts. Dirt is brushed off, and, if necessary, the melons are washed and then graded for quality and size. A price-look-up (PLU) sticker is applied to each melon before being placed in a bin for shipping. The bins are also labeled.

“We have a full traceability program; we can follow every melon through the supply chain. Most larger shippers have this because retailers demand it,” says Wroten. “I can look at the PLU sticker and tell you what day that melon was packed, the lot number it came from and what crew picked it. The label on each bin will tell me what day it was packed, the lot number and what crew packed it.”

Although you might think of them as a Southern crop, watermelons are grown in many states, ranging as far north as Michigan. U.S.-grown watermelons are available May through September, but because you can buy watermelon in the grocery store year-round, other countries must step in to meet the demand.

“In the fall and winter, the melons you see in the grocery stores likely come from Mexico and Central America, primarily Guatemala and Honduras,” says Wroten.

Now that you’re craving sweet, juicy watermelon, it’s time to go shopping. Whether you’re at the grocery store or farmers market, look for a firm watermelon free of bruising, dents or damage. It should feel heavy for its size and have a cream-colored “belly” on the underside.

Don’t rush that melon to the fridge. Whole melons keep best at room temperature for up to 10 days. Of course, once you cut into the watermelon, you should store any leftover fruit in the refrigerator, where it will keep for three to four days.

The average watermelon weighs 20 pounds and about 70 percent of that is edible fruit. (But don’t ignore the rind; you can use it for a “bowl,” pickle it or compost it.)

Always wash the watermelon thoroughly with mild soap and water, and dry it before cutting into it to prevent the knife from contaminating the flesh with bacteria from the outer skin.

Now, dig in and enjoy!

A Sweet (and Healthy) Treat

Watermelon By The Numbers

Heat oil in a heavy non-stick skillet over medium-high heat.› Sauté the jalapeno, shallots and garlic until golden and toasted around the edges.› Remove from heat, and add soy sauce and cumin. › Cool. ›Scrape the cooled ingredients into a bowl, and toss with lime juice, watermelon, shrimp, parsley and roasted pepper. › Season with pepper to taste.› Serve with chips and margaritas, fish tacos or atop grilled salmon.

In a blender, add the watermelon first and then ice cream, cream cheese and gelatin granules; blend. › Pour into glasses, and sprinkle with graham cracker crumbs or add to rim.

Chicken Salad with Watermelon and Peaches

Mix together the chicken, yogurt, mayonnaise, dill, lemon juice, salt and pepper. › Fold in chopped peaches and watermelon, and serve on rolls as sandwiches or as a salad.