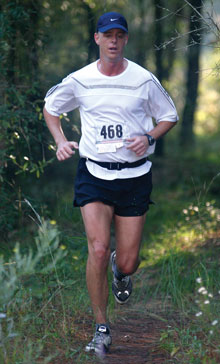 Once an ultra-competitive runner who raced only to win, Roger Sutton is now an ultra-marathoner who runs for fun and the satisfaction of finishing.

Before we go any further, consider Sutton’s definition of fun—a 66-mile trail race in Virginia’s George Washington and Jefferson National Forests. In December. In below-freezing temperatures. Think snow- and ice-covered trails with 27,000 feet of elevation change. There is a time limit of 18 hours to complete the course before a runner is pulled from the race. And one more thing—the race starts at 12:01am.

Want more? The first seven hours of the race are run in darkness except for a runner’s headlamp lighting the trail. Bringing new meaning to the expression “when hell freezes over,” the race is aptly named Hellgate.

“In many ways, Hellgate is more of an event than a race,” says Sutton, 45, who in 2005 finished the course in 15 hours and 20 minutes. “It brings out the best qualities in every runner and challenges even the most seasoned ultra-runners. It’s special.”

The whole experience was so trans-formative for Sutton that he wrote a book about it. His novel, Hellgate, was published in December 2006 and while written as fiction, the book is more than a bit autobiographical.

“The book,” Sutton admits, “was my way of putting my life, my running life, in perspective.”

For Sutton, the leap of perspective has been a transformational one. In the 1980s, he was a member of the University of Florida’s track and cross country teams. As a five-time letterman at UF, Sutton competed in four SEC Championships and one National Cross Country Championship. Additionally, he raced for the Florida Track Club Competitive Team and Reebok National Team.

Sutton was an elite runner with personal best times that ranged from 4:09 for the mile to just a little over an hour (1:06:21) for a half-marathon. From the time he was a teenager and through college, Sutton won hundreds, yes, hundreds of races.

“I went to every race with the intention of winning,” says Sutton. “Not winning was failure.”

After earning his Bachelor’s degree in aerospace engineering in 1984, Sutton was planning on a professional running career. He’d even signed a small sponsorship contract with Reebok. But in the fall of 1985, Sutton ruptured the Achilles tendon in his left foot during a speed workout.

Surgery followed, but Sutton’s athletic life as he had known it was over.

Over the subsequent years, he tried to start running again only to stop when the pain became too great. He grudgingly realized that he could never be the elite runner he had once been. In Sutton’s win-or-nothing mindset, anything else was not acceptable.

“Watching the horror of 9/11 on TV, the anger was overwhelming,” recalls Sutton. “So I did what I had always done be-fore to deal with stress, I went for a run.”

He only managed an easy jog, a mile. But it was the beginning back to a life that included running. Ten days later, he was still running.

“It felt really good to be running again,” says Sutton. “But I didn’t want to keep running on the road, so I decided to check out the trails at a park. That’s when I met a group of ultra-runners. They were out for a 35-mile run. I had never heard of any-thing like that. I thought that was crazy.” 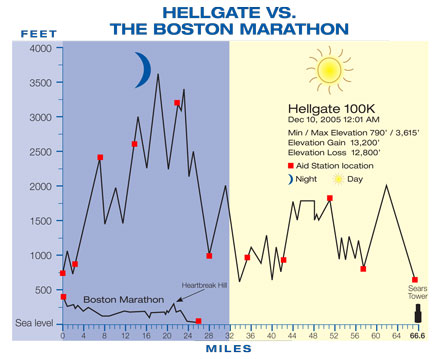 Three months later, Sutton joined their ranks and ran his first 50K (31 miles) race. He finished third in four hours and two minutes. He’s been an ultra-marathoner ever since.

Ultra-marathons are races beyond the 26.2-mile marathon distance and ultra-marathoners stress enjoying the experience over finishing times and order of finish.

“This was a whole new attitude,” admits Sutton, who is a lanky 6-1, 165 pounds. “I had to learn to really relax. I’m still competitive, but it’s more about me against the trail than about beating some-one else. The trail is the great equalizer.”

Sutton logs 70-100 miles a week, mostly on the trails of the Florida Greenway and Croom Tract of the Withlacoochee State Forest. Often joining him on training runs is Andy Mathews, a Tampa resident who was named the 2006 USA Track & Field Florida Ultra-Runner of the Year.

“Roger is a great runner,” says Mathews, who has also logged nine 100-milers. “I don’t really compete with him as much as let him take down all of the spider webs on the trails, since he’s ahead of me anyway.”

Sutton also logs miles on a treadmill and cross-trains by riding the trails on a mountain bike. While he doesn’t adhere to a special diet—his favorite food is Mexican—he says the key to training is wearing a heart monitor.

“The secret is finding your maximum heart rate and then training below it at the level that is most efficient for your body,” explains Sutton, who is a private engineering consultant and has been married to his wife, Jill, for 12 years. “The key to long-distance running is to train your body to burn fat instead of carbohydrates. And you do that by doing long training runs of four to five hours at a heart rate below your maximum.”

Since his Hellgate experience, Sutton has run a variety of ultra-marathons. He ran a six-day race on the Appalachian Trail, averaging 28 miles a day through Tennessee, North Carolina, and Virginia. He ran the Croom 50-Mile Fools Run in six hours and 48 minutes. Next up is the Rocky Raccoon 100-Miler in Huntsville, Texas. The race begins at 6am and participants have a time limit of 30 hours to finish the course.