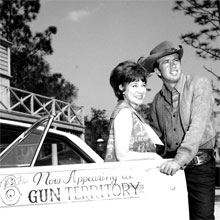 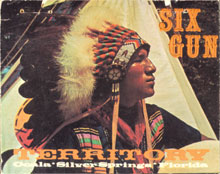 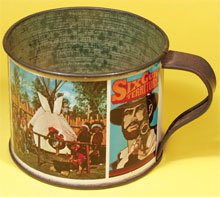 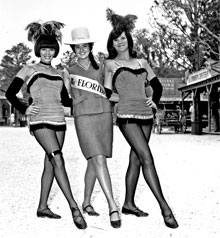 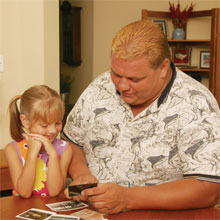 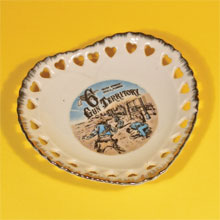 It’s been just a little more than two decades since the last bad guy bit the dust out at Six-Gun Territory off East Silver Springs Boulevard.

But times have changed. Life isn’t quite as simple as it was in Six-Gun’s heyday. Back in the ‘60s and early ‘70s, there was still a little naiveté left in our lives, along with a quiet certainty that good was good and bad was bad. And everyone knew that on the streets of Six-Gun, the good guys always won.

Back in the early 1960s, the TV show Bonanza was a favorite in living rooms across the country. Other TV Westerns were popular as well, and cowboy movies were making a comeback with the advent of the Spaghetti Westerns — low-budget cowboy films made in Italy, like The Good, The Bad and The Ugly.

When Six-Gun Territory opened at the beginning of 1962, its owners were hoping to capitalize on the popularity of the Western genre. They also operated a similarly themed attraction — Ghost Town in the Sky at Maggie Valley, North Carolina. What was working so well there, they thought, could work here, too.

For their new Six-Gun park, they chose a location — just down the road from world-famous Silver Springs — they hoped would help snag tourists on the cusp of their visits to that popular attraction.

It worked. At its peak, 10,000 to 12,000 visitors a day crowded Six-Gun’s Hollywood set-like streets and buildings, clapping enthusiastically when the saloon girls can-canned and the bank robbers were six-shootered into eternity.

Six-Gun was billed as a “Fun-tier” town where families could experience the Wild West. One early brochure promised “a full day and evening of family fun and pleasure in this wonderful Old Western town of the 1880s.”

There were cowboys, of course, and real Indians. There were saloons serving entertainment and refreshments, a livery stable, a bank, a jail, a stagecoach, and a train that took visitors from the railroad station facing Silver Springs Boulevard back to the pioneer town.


Six-Gun was a totally G-rated attraction. The street gunfights were morality tales, the saloon girls’ outfits were (certainly by today’s standards) modest, and the only beverage with a head on it was the root beer served in frosty mugs at the Palace Saloon.

The pretty can-can dancers (mostly high school and college girls who lived in the area) were delighted to pose for snapshots with visitors. So were the deputies, cowpokes, Indians, stagecoach drivers, and Digger the Undertaker. If you were little enough, you could ride a pony and have your picture taken on it. You could even get your name printed in a headline in the Six-Gun Gazette to keep as a souvenir.

The park employed many local residents in positions ranging from entertainers to gift shop employees. A good share of Ocala’s teenagers and young adults found part-time or summer vacation jobs at the park at one time or another. Many say it was an exciting place to work.

In the early ‘70s, Dee Carlin was the assistant secretary to Page Robinson, manager of Six-Gun.

“I was also a part-time can-can dancer when they needed someone to fill in,” she explains.

She vividly remembers the excitement on the streets when the gunfights erupted.

“You could be in a shop, and all of a sudden you’d hear something going on outside. You’d run out and watch as the deputies pursued the bank robbers. Then there was a gunfight. It happened several times a day — different places at different times — and it was always a surprise because you didn’t know when to expect it.”

Among many visitors’ best memories were the chances they had to see and sometimes actually meet the top Western and family show TV stars of the day who appeared at the park.

Dan Blocker and Lorne Greene from Bonanza were there, so was Jon Provost who played Timmy on Lassie, and Clint Walker of Cheyenne fame, among legions of others.

For kids growing up in Ocala, regular trips to Six-Gun were an exciting part of their lives.

“Six-Gun Territory was so much fun. It was second only to Disney World in those days,” remembers Ocala Style Art Director Trevor Byrne.

“What was your favorite part?” I asked Trevor.

“The can-can girls,” he replied with little hesitation. “No, I guess it was the gunfights,” he amended. “The bank robbers would even fall off the roof when they were shot. It was exciting!

“I remember the time that Spiderman from the TV show was there,” Trevor continues. “He was in one of the gunfights. He didn’t use a gun; he just threw his net over the bank robbers to capture them.

Many who shared their memories with us, like Trevor, are remembering the “later” Six-Gun Territory of the 1970s and early-‘80s. In its first years, however, the park’s focus was entirely on providing “an authentic Wild West experience.” The county fair carnival rides were added later to help expand interest in the park.

Another aspect of the park that wasn’t there in the very beginning was the Gondola Sky Ride. An excellent website, lostparks.com, notes: “Eventually, to provide a new thrill, as well as keep up with the volume of visitors in the busy season, a skyride (“the highest in Florida”) was added. You could take the train one way, then take the skyride back to get both experiences (when one or the other wasn’t closed, that is). The skyride did not last for the life of the park: note that it doesn’t even appear on the map from the 1980s.”

Not everyone was happy when the carnival rides and other non-Western elements were added to the Six-Gun experience.

“I really wish they hadn’t added them,” says Steve Bonwell, an Ocalan who remembers visiting the park with his family in the early ‘60s. “I liked it better when it was all about the Wild West. I think it lost something when they brought in the carnival rides. It was really a shame.”

For many who visited Six-Gun from out of town, it was the primary reason they came to the area, rather than being just an afterthought to a visit to Silver Springs.

Brian Sayers fondly remembers going there every year with his parents. “We lived up in Jacksonville then, and we saved up and looked forward to our summer trip to Ocala all year long. We would drive down in our Vista Cruiser with no air-conditioning. It was always a hot and ‘Daddy-are-we-there-yet?’ kind of trip. But it was exciting, because I knew what was ahead.”

Brian says the family would spend a full day at Six-Gun and visit Silver Springs and Wild Waters in any time that was left over. “That was fun, too, but Six-Gun was the best part.”

By the early ‘70s, TV Westerns were being replaced by situation comedies aimed at young audiences, and the aura of the Western town wasn’t as appealing as it had been a decade earlier.

When Disney World opened in Orlando in 1971, both Silver Springs’ and Six-Gun Territory’s share of the entertainment pie was cut dramatically.

By the end of the ‘70s, Six-Gun had changed hands several times and its future looked bleak.

Trevor Byrne remembers those last years. “That’s when the carnival rides got really scary,” he says. “They weren’t supposed to be, but they weren’t fixing parts that were broken and they looked like they were falling apart.”

The park had long served local schools and professional and business groups as a venue to hold parties and carnivals. Toward the end of Six-Gun’s life, however, groups pulled out because of safety concerns.

Ocalan Frank Stafford recalls that even the board sidewalks were rotten by then. “We were afraid that someone would step right through the wood and get hurt.”

In early 1984, the developers who purchased the park sold off the rides and other park paraphernalia. They bulldozed and carted away whatever was left.

Recently, Brian Sayers was showing his niece some photos of one of his visits to Six-Gun back in the ‘70s.

“This is Uncle Brian with two deputies,” he explains to five-year-old Makenzi Sayers. Makenzi looks with interest at a younger version of her uncle standing between two men in a faded Polaroid print.

“That’s you?” she asks him, pointing to the youngster in the photo.

“Yes, it is,” he replies, a little wistfully. “That was me a long time ago. I wish Six-Gun was still there, so you could go to it.”

Today, the Shoppes of Silver Springs shopping center sits on the site where Six-Gun used to be. A recent visit to the property’s backyard turned up a few decaying fence boards and several large hunks of concrete (possibly supports for the Sky Ride), but little other evidence of Six-Gun’s existence.

The pioneer town is long gone, but so many memories remain.

Dee Carlin looks at the snapshot of herself as a child with Dan Blocker (Hoss Cartwright of Bonanza) that was taken in the late ‘60s.

“Those were really good times,” she says. “I’ll never forget them.”

Judging by the sheer number and variety of Six-Gun keepsakes we were able to track down without too much difficulty, the park must have done a land office souvenir business!

Many of the items have been kept all these years by their original owners, tucked into old scrapbooks or squirreled away with other mementos in drawers and closets. Others have wound up in the hands of Six-Gun Territory memorabilia collectors like Ocalans Frank Stafford and Steve “Shorty” Bonwell.

Frank collects old Ocala memorabilia of many kinds and considers Six-Gun souvenirs an important part of his collection.

“I was in high school when they were building it,” he remembers. “My sister even worked there as a can-can dancer for awhile. I remember that when Jon Provost, “Timmy” from Lassie, appeared there, he came to our house to visit with my sister.”

Virtually none of Frank’s souvenirs are from his own visits to Six-Gun, however. “I’ve picked them up over a number of years at garage and estate sales, and bought them from other collectors,” he says.

Although Frank says he never buys off the Internet, some collectors do frequent auction sites.

Steve Bonwell has located most of his Six-Gun souvenirs on eBay and at other Internet auctions.

“There’s a lot out there,” he says, “and lots of collectors looking for items. It seems like anything they made more than two of, somebody’s collecting it.”

A recent check of Internet auctions turned up a 1963 Six-Gun Territory pennant decorated with a colorful Indian in full headdress and a set of Viewmaster reels showing the park’s attractions. There are also quite a few colorful postcards, mostly from the 1960s.

Starting bids ranged from $4 for three vintage postcards to $25 for a 10-inch souvenir plate in perfect condition.

TIP: If you’re interested in tracking down your own park items online, try entering “Six-Gun Territory” into your favorite Internet search engine.

Bertha Flynn, of Flynn Photo Studio in Ocala, has enlarged popular postcards from Six-Gun and framed them for suitable home or office display. For information on available images, call Bertha at 732-7011, or visit the studio at 21 NE Tuscawilla Avenue in downtown Ocala.