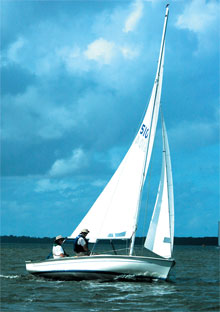 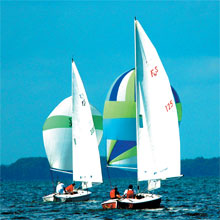 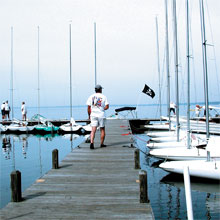 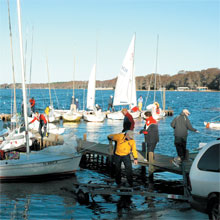 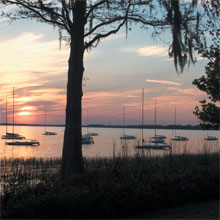 Take a boat, a brisk wind, and a race, and you’ve got a bunch of happy sailors. That’s what you’ll find among the ranks of the Lake Eustis Sailing Club (LESC).

The club’s mission is “to foster and promote One Design Racing among sailors of all ages.” One Design is a designation for racing, which means the sailboats are all the same type in the race, and they sail as a class.

The LESC clubhouse is just off County Road 19 in Eustis, along the shore of its namesake lake. The walls are filled with photographs from past races and regattas, along with flags from visiting sailing clubs that participated in special events. It has glass doors instead of outside walls, which open up to bring the outdoors inside.

Just outside the clubhouse, underneath a canopy of cypress tress laced with Spanish moss, are picnic tables positioned perfectly to take advantage of the lively breeze that dances across the water. The sun explodes into a thousand sparkles on the water’s surface, making it an ideal place to enjoy a club barbecue or watch the races.

To the east of the clubhouse, the boats are lined in their spaces, neatly stored and waiting for their owners to come and sail another day.

Mount Dora resident Martin Zonnenberg has been a member since 1998. He began sailing as a child living in Holland and has enjoyed it all his life. He continued his sailing while working in Atlanta and now enjoys being an active part of the club in his retirement.

Zonnenberg speaks proudly of how the club’s membership has increased to 130 members since the move to its present site.

“It’s paradise out here, and I think that’s the reason we’ve seen such tremendous growth,”  says Zonnenberg. “We’re not a cruising club, we’re dedicated to racing.”

Members of LESC use three major boats: MC Scow, Wayfarer, and Flying Scot. MC Scows make up about half of the racing fleet of the club. They are 16-feet, flat-bottomed boats that can be sailed by one or two people. Wayfarers are sloops, with a main sail and a jib sail. The final group is the Flying Scot, which are 19-foot sloops.

Leesburg resident Jim Lingeman is a member and has been sailing for 35 years. He says he got started a little later than most of the others in the club, but sailing is still his passion.

“You know, you can put your tube in the water here and go all the way to Jacksonville,” Lingeman says, looking out over the water. “This is an almost-perfect spot. We’ve had a nice, breezy spring, and there are no mountains here to distort the wind.”

Lake Eustis is part of the Harris Chain of Lakes in central Lake County. Connected by natural creeks, canals, and locks, the lakes are very popular for fishing as well as sporting boats. Boats can launch from any of the lakes and make their way downstream to the Ocklawaha River.

“We draw people from all over the country, who come here to sail,” Lingeman says. “We think we really help the Florida economy by bringing all these people in for the races. We attract members from a wide area, even from both coasts.”

Though club records are somewhat sketchy,  the Eustis Marine Club became a not-for-profit organization is March 1953 at the Eustis Marina. It was originally a club for power boaters, though they eventually accepted sailors into the membership. Club members were dedicated to keeping lakes and waterways clean and unpolluted, and they monitored legislation to ensure that boating laws were equitable.

The club eventually evolved into the Lake Eustis Sailing Club and now has no powerboat members. They’ve been at the CR-19 site for eight years, and the clubhouse was built four years ago. Club leaders are elected at an annual meeting, and social activities include an occasional barbecue or potluck dinner.

Membership has five categories: voting members, family, social, junior, and a trial membership for those who wish to enjoy the benefits of the club for 90 days. Currently, there are almost 90 members in the club.

The club has more than 80 races a season, which lasts from Labor Day until Memorial Day. During race weekends, there are two races each Saturday and Sunday, beginning at 11am. Spectators are welcomed and guaranteed to enjoy themselves.

“We have three national regattas and a Junior Florida Championship Regatta,”  says Zonnenberg. “We bring a lot of attention to this area because of sailing.”

The races are every other weekend, and there are nine regattas a year. The regattas are two to three days of intense racing. Sailors come from all over the country to enjoy Central Florida’s wonderful sailing conditions.

“We have a Race Committee boat that gives signals, and we race between two marks, going upwind and downwind three times. The first boat across wins,” Lingeman says. “It has been great this year.”

As the only racing sailboat club in Central Florida, LESC attracts people from all over the state in their membership. Though many members enjoy taking their boats out for pleasure sails, others keep them strictly for racing.

Because there’s always a chance a boat can capsize, a safety and rescue boat is on site at every race, though most members are able to recover their boats and resume sailing.

Lingeman estimates that probably two-thirds of the members are over 55.

“We have some people who come here to retire and learn to sail,” he says with a smile. “The beauty of being here is there is a new crop of retirees every year.”

That group of new retirees is fortunate if they’re looking to add sailing to their lives. LESC has a great “Learn to Sail” program for adults, using the inimitable Flying Scot. Considered a very stable sailboat, it’s great for racing or just for recreational sailing.

For $300, you get a three-month membership in LESC and six sailing lessons for two participants per session. Lessons are an hour and a half and include all the basics for sailing and safety on the water under the tutelage of certified instructors. Students must provide their own “snug-fitting” life jacket for the program.

The club is dedicated to ensuring its future by offering lessons through the Lake Eustis Youth Sailing Foundation. The goal of the foundation is to promote sailing among Lake County’s young people. They have created an environment that stresses, good sportsmanship, honesty, loyalty, courage, self-confidence along with respect for authority, the environment and the community as a whole.

“We work to keep things safe and fun for the kids,” Zonnenberg says. “We try to guide the juniors to become top sailors.”

All levels of learning are available in summer camps that are supervised and coached by U.S. Sailing Certified Sailing Instructors. The club stresses that safety is the priority, with all participants guided by the foundation’s “common sense conduct and safety rules.”

These rules include all participants being able to swim 200 feet, tread water for one minute, and complete a capsize drill, which is taught the first day of class. Students must display good manners, their best behavior, and sportsmanship throughout the program. They’re also responsible for their own boat during each class and must make sure it is put away cleaned and ready for the next session.

The program is intended to teach a sense of responsibility, an attitude of friendly competition, and encourage the maturity needed to be a good sailor.

Year-round sailing is offered for junior sailors (ages 8-17) during weekends while they’re in school. This allows students to keep up the skills learned during the summer and have ample opportunity to continue to participate in a sport they enjoy. All classes are held on Saturdays. The club has the boats and is eager to see young people become involved in what could become a lifelong love of sailing.

The junior classes have several levels. Junior sailing for ages 8-15 is done with the Optimist dinghy, which is eight feet long. Students in high school can learn on the Club 420 sailing dinghies (ages 15-18). The fee is $40 for both levels.

“This is the perfect boat for them to learn sailing. It’s sized for them but is completely like the large boats,”  says Zonnenberg. “Scholastic sailing is popular all over the U.S., even in intercollegiate areas.”

The Laser training program is for ages 15 and older  with the same fee. On club race weekends, they practice on a separate racecourse.

“The Laser class is for really good sailors, and we have an excellent instructor,” Zonnenberg says. “Sam Chapin is a retired physician and is dedicated to teaching sailing. We have quality instructors for all our programs.”

For those who love the wind and the water and the thrill of operating their own boat, the Lake Eustis Sailing Club offers a place to experience it to the fullest.

Songs of the sea
Songs have been a part of sailing since its earliest days. Sailors often talked of being lured into trouble by the “siren’s song.” We thought we’d have a little fun listing some of our favorite songs about dancing across the water with sails raised high.

Want To Know More?
For more information and class schedules, check out www.lakeeustissailingclub.org