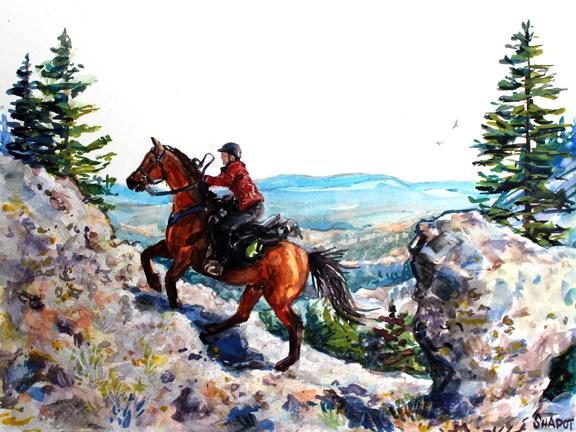 “We are definitely a team. Our wins are a team effort,” says Heather, 41, who has been involved in endurance riding since she was 11. “We love competing in the Tevis Cup, and it’s my favorite endurance ride that we do.”

“To compete in the Tevis Cup is definitely one of our goals every year,” says Jeremy, 39, who has been competing since he answered an ad while in college to condition endurance horses. “In this country, it’s the endurance ride everyone wants to compete in.”

The Tevis Cup, aka the Western States Trail Ride, is a 100-mile endurance ride through California’s Sierra Nevada Mountains. Established in 1955 and sanctioned by the American Endurance Ride Conference, the Tevis Cup is recognized as the founding ride of endurance riding. Competitors have to finish within the 24-hour allotted time to earn a silver buckle. The ride begins at 5:15am and must be completed by 5:15am the following day, which means riding through the night.

The Tevis Cup trophy is named after Lloyd Tevis by his grandson, Will Tevis, a prominent San Francisco businessman and early benefactor of the ride. Since 1959, the Tevis Cup has been awarded to the rider who completes the event in the shortest amount of time and whose horse is deemed in sound condition and fit to continue by the veterinary committee.

“We have been very fortunate to have ridden some excellent horses over the years,” says Heather. “The horse and the connection you have with the horse is everything.”

As proud as Jeremy and Heather are about their Tevis Cup victories, they are even more proud when it comes to their Haggin Cup wins. That trophy is awarded to the Tevis Cup rider whose horse is deemed to be in the most superior physical condition of the first 10 horses to cross the finish line by a veterinary committee. Jeremy has earned three Haggin Cups (2004, 2011 and 2017) on three different horses, the only rider to accomplish that feat. Heather claimed the Haggin Cup in 1999 and 2003.

“Winning the Haggin Cup is a validation of our training and conditioning program,” says Jeremy. “That’s a whole other special win in itself, and to win both the same year is very difficult. Heather won the Tevis Cup and the Haggin Cup in 2003. I won both in 2004 and 2011.”

Both originally from California, Heather and Jeremy first met, not surprisingly, at an endurance ride in Nevada in 2001. A year later, they were married. In 2011, they moved to Dunnellon. The couple’s farm is within riding distance of the Goethe National Forest, where they log 30 to 40 miles a day riding three to six horses, six to seven days a week.

“We compete on the United States Equestrian Federation in endurance rides abroad, and to do that you have to qualify in Federation Equestre Internationale (FEI) events,” says Jeremy. “There are many more FEI events in Florida than in California, so it was a good move for us. Representing our country, we have competed in Spain, Portugal, Malaysia, Colombia, England, France and the United Arab Emirates.”

Beyond the Tevis Cup, Jeremy and Heather have a long list of other accomplishments. Jeremy earned a gold medal at the 2011 and 2013 North American Endurance Championship and silver at the 2015 event. Heather captured gold and then silver at the 2001 and 2003 Pan American Games, respectively. They are also three-time winners of the National Husband and Wife High Point Award, presented by the American Endurance Ride Conference.

The Reynolds duo will be competing in the Gallop On The Greenway, December 28 through 30, at the Florida Horse Park. The event, featuring rides of 10, 25, 50 and 100 miles, will include riders from both the United States and Canada.

“Horses are our lives, and we consider ourselves very fortunate to do something we love for a living,” says Heather.

Jeremy adds, “And that we get to do the sport of endurance riding together makes it all the more special.”

Gallop On The Greenway