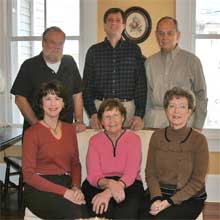 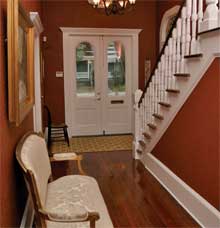 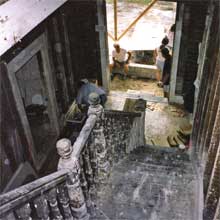 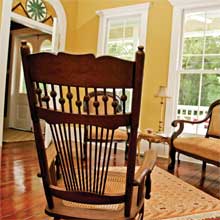 In the early 1880s, R.R. Snowden, a prominent citizen of Ocala, built a very nice house on property he had purchased for $200 near Tuscawilla Lake. The house Snowden built was quite different from others in the Tuscawilla neighborhood. Those were more modest structures — homes for the families of average people who worked in the downtown shops or the local cigar factory.

The Snowden House, designed in the Italianate style with a balanced, symmetrical façade, was grand in contrast. Each of its two floors had its own graceful front porch and there were six fireplaces, as well as 32 generous-sized windows to encourage optimal airflow. While it wasn’t an especially ornate house, it was downright imposing compared to its neighbors.

Although his home’s location was somewhat incongruous with his station, Snowden may have chosen the site because of its convenience to his business. He was a druggist and owner of the Ocala Drugstore on the town square, just a few blocks away. The citizens he served there respectfully called him Dr. Snowden.

Records show that Dr. Snowden sold the residence in 1885 for $3,000. It was the first of many sales to come in the structure’s long and bittersweet history. Now its early charms have been restored and the Snowden House has taken its rightful place as one of Ocala’s special treasures.

It’s impossible to know how many souls have called the Snowden House home over its 120-plus years. And while its early residents were well-to-do citizens, many of its later occupants were far from that.

The years were not kind to the once-venerable structure. It seems that from the 1940s, when it changed from a single-family home to multiple apartments, its condition steadily deteriorated.

It turned 100 in the 1980s with little dignity. By then, it had been painted and partitioned nearly to death and its beauty was buried under layers of grime.

It caught fire one night. Perhaps an occupant fell asleep smoking, but no one knows for sure. Some surmise, however, the old house’s extra walls and coats of paint may have saved it from total destruction. They say that the fire had to burn through all those layers before reaching the studs — the “bones” of the house — and the fire department was able to put out the blaze before that happened.

The owner, however, didn’t care to invest in its tenuous existence any longer and simply abandoned the property. For several years afterward, the old house squatted dismally in its place — blackened and used up — awaiting its final indignity.

Then its rescuers arrived, just in time.

For several years, a local group, the Historic Ocala Preservation Society (HOPS for short), had been looking for a property to restore. An important part of the group’s mission was to save irreplaceable older structures that had helped define the community and shape its history.

In the mid-1990s, the group was looking at properties in the Ocala Historic District — sad Queen Annes and other Victorian-era structures badly in need of attention. By then, however, restoration of other homes in the district was well underway, which led to a rapid increase in property values. The HOPS group simply couldn’t afford to purchase anything in that neighborhood.

The group’s members then turned their attention to the Tuscawilla area and discovered the Snowden House. It was ugly, filthy, and badly charred from the fire. However, experts they hired pronounced it to be structurally sound.

HOPS actually missed out on purchasing the home from the bank by just 24 hours; they learned that an Ocala investor had already bought the property. They decided to ask the purchaser, Terry Buchholz, if he would consider reselling the house to them. Fortunately, he is a preservationist and readily agreed. He said he would even hold the note on the property and not ask for any payment during the first year.

“We couldn’t have done it without his help,” says Pamela Stafford, the current president of HOPS, who also served in that office for three years during the restoration process.

Now, looking back on the beginnings of the project, Pamela laughs a little at her group’s naiveté. “We didn’t know what we were getting into.”

Ocala architect Jim Tatom had restored his own old house in the Ocala Historic District and his firm specialized in design work for such projects. He was the perfect choice for the Snowden House.

Jim drew up the restoration plans and, in 1996, HOPS volunteers began the arduous task of removing everything not original to the house. It took two entire years to remove it all — the extra walls, the coverings over the fireplaces, the burned up wiring, the wrought iron railings, and scores of other add-ons.

“It was hot, dirty work,” remembers Elsie Crippen, treasurer of HOPS. “There were times that we thought there were just too many problems to overcome. But Pamela and I made a promise to one another. We wouldn’t quit.”

Pamela Stafford was more or less in charge of the fundraising and securing of the in-kind contributions, “the begging” as she calls it. Elsie, a CPA, was charged with keeping track of the literally thousands of financial details. Three other HOPS members who provided their knowledge and skills were Jack Hayes, the project coordinator; Bill Browder, who served as a liaison with tradespeople and services in the community; and Carl Supplee. Beryl Willmot, a HOPS board member who serves as the group’s executive secretary, also provided her constant expertise and support.

The people in this “core group” provided thousands of hours of hands-on work, week after week. Along the way, they were joined by hundreds of volunteers from the community who also believed in the project.

Originally, HOPS members believed that they would be able to complete the entire restoration project in three years. It took eight and a half.

“It was a constant roller coaster ride,” says Pamela. “Our work would be moving along well, and then we’d have a setback.”

HOPS members recount many reasons the restoration took so long, conditions they hadn’t had an inkling about when they started the project.

They discovered quite early in the “deconstruction” phase that the roof needed to be totally replaced. Then one of the house’s two tall chimneys began disintegrating. “There were other ‘minor’ problems as well,” explains Elsie.

“As always,” adds Pamela, “our angel, Jerry Cullison of Cullison-Wright Construction, stepped in and did what had to be done. The house had to be jacked up, literally, and new piers had to be added. It was major construction. Every time we had problems like that, Jerry was there to solve them.”

Meanwhile, HOPS had applied for state grants that would match local contributions for the restoration. Although the state preservation board was very supportive of what they were doing, the grant process required extensive research and documentation and was often quite cumbersome.

Midway through the restoration, HOPS had to make an all-out appeal to the community for financial help in order to have the resources they needed to go forward with the work and to qualify for additional grant monies.

“The community showed pride in Ocala’s heritage,” says Pamela. “We had an overwhelming response. People believed in the project and wanted to do what was necessary to see it to completion.”

HOPS’ original intention had been to restore the house, sell it, and use the proceeds from its sale to purchase another structure in need of restoration. The group planned to repeat this process over and over, thus saving home after home.

However, politics being what they are, newly arrived appointees to the state’s preservation board had other ideas and changed the rules. Under the new requirements, if HOPS wanted to continue to receive matching grants from the state to complete its work, it had to agree not to sell the house, but keep it for its own use.

“That was really a blessing in disguise,” explains Pamela. “By that time, people in Ocala and Marion County had provided so much help with monetary and in-kind contributions, the house really belonged to the entire community, not just to HOPS.

“Now it’s finished,” she concludes, “and we’re very proud of that.”

The community has watched the Snowden House’s transformation with great fascination. Many have enjoyed visiting the site on HOPS’ annual Heritage Tour of historic homes each year, carefully following the house’s gradual resurrection.

This year, a number of pieces of “historically correct” furniture have been added to the house, along with an impressive exhibit of 19th century china.


The 2005 Heritage Tour will take place on March 30 and April 1. HOPS has combined its historic home and hidden gardens tours into one event this year. Visitors will be able to see all of them over the two-day period for one ticket price. Admission is $15 on the day of the tour and $12 for pre-tour reservations. Call 351-1861 for ticket locations.