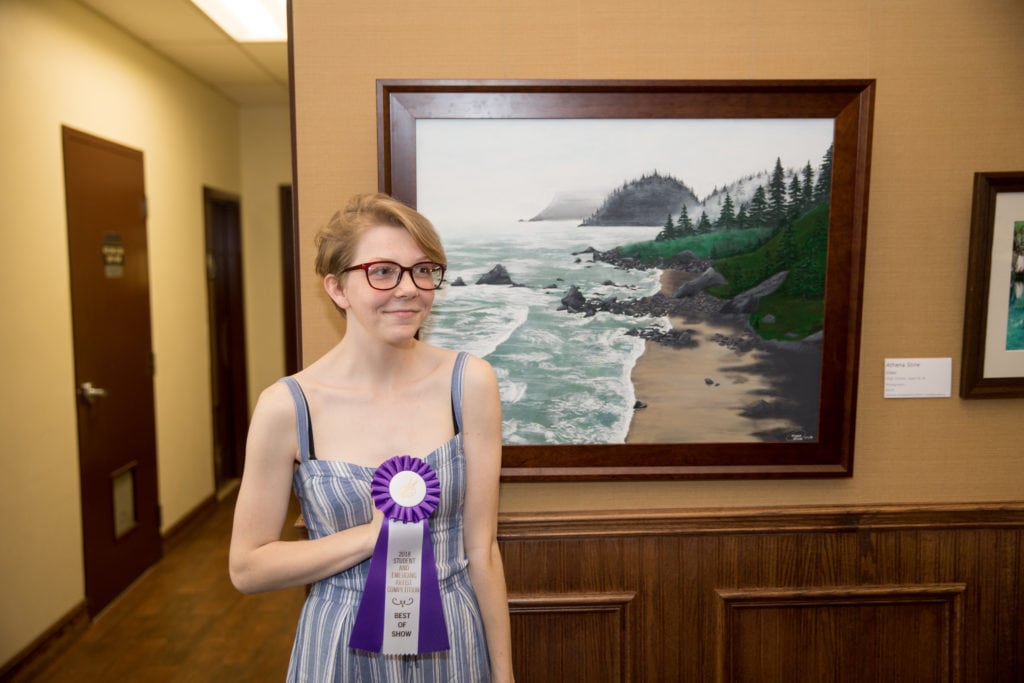 Bonnie Healan thought she had a chance at winning the high school category in the Student and Emerging Artist Exhibit: A Juried Art Competition, but, when she didn’t hear her name called, she was naturally disappointed. The only other category left to be announced was Best of Show, and well, that was out, she thought.

“I didn’t see it coming at all,” the 16 year old says about hearing her name announced as winner of Best of Show. “I thought, ‘Oh man, this is something.’ I really didn’t expect it, and I turned red.”

Winners were announced at a reception on Thursday, May 10 at Ocala’s City Hall. The City of Ocala and Magnolia Art Xchange partnered on this competition, inviting artists in the community between the ages of 16 and 30 to submit their artwork. Artists, art supporters and members of the community filed through the halls looking at each piece of art and then strolled through a line of drinks and appetizers.

This was Bonnie’s second year entering the competition, and she heard about it from her art teacher at Lake Weir High School. She decided to enter again this year and submitted a painting of a coastline.

Bonnie calls it Perfect Place No. 1.

“It’s a coastline in Oregon, and I’ve always wanted to go to Oregon,” she says.

Not a fan of Florida or its weather, Bonnie set her sights on Oregon some time ago. ‘Reflections’ was the theme of this year’s competition, and she had first thought about painting water or something representative of her life. Instead, a nature-filled, Oregon coastline developed. As she added the finishing touches, though, Bonnie was able to twist this piece into something that did, in fact, represent part of her life. Her artist statement says it best:

“When asked to reflect, I immediately think about my life. And doing so, I realize I am only 16, and I haven’t lived much. But I will. I’ve been given the chance, and if the universe allows it, I will live a lot. I finished the last details of this painting during a lockdown at my school. I was lucky enough to be pushed into the art room for hiding, and after establishing that I probably wasn’t going to be shot, I decided that this piece was more than just a coastline, and I should work on finishing it. The world is getting scarier in my eyes, but it still has some perfect places. This is one of them.”

Glimpse her painting and the rest of the exhibit while it’s on display at City Hall through July 26.