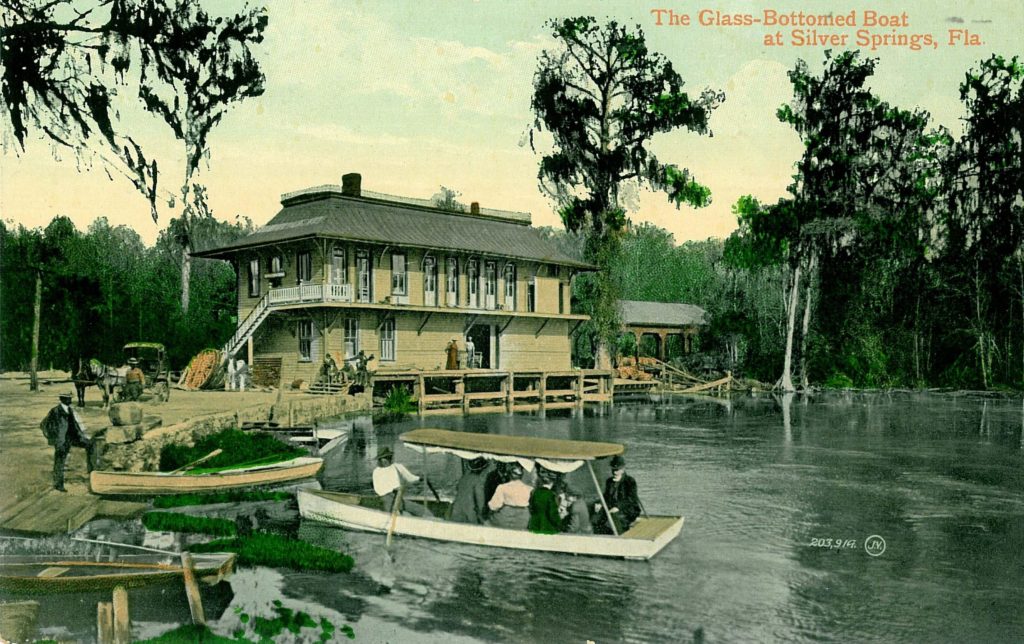 eople have always been fascinated by the underwater world and that mysterious realm remained inaccessible for years. Scuba was not invented until 1942 and, prior to that, divers risked disaster with hookah-like air hoses attached to large metal helmets.

More careful explorers, or perhaps those who could not swim, chose to remain above the water and peer below with viewing devices. As early as 1845 the “underwater telescope” was patented by the inventor Sarah Mather (US Patent 3,995A). The device was essentially a glass-bottomed bucket or box that allowed one to remain above the surface and look through down the glass to see underwater.

As more and more tourists began visiting Silver Springs during the late 1800s, that fascination with what lay beneath presented an opportunity to local entrepreneurs. Indeed, the underwater telescope allowed a single person to view below the surface. However, if you were to take a rowboat full of tourists out to view the springs, each person would need their own viewing device. This worked, but it was a little clumsy and you would end up with a gaggle of folks all peering over the side into glass-bottom boxes.

Several inventive locals designed a better way. If you moved the glass viewing surface to the bottom of the boat, then your passengers could simply lean forward to see the underwater sights together. Wealthy tourists would gladly pay for such an adventure and, with this being Florida, well, you can probably guess the rest of the story.

Phillip Morrell and Hullam Jones are credited with building the first glass-bottom boats at Silver Springs in the 1870s. Historical accounts vary. Some credit Morrell with the first design (a modified rowboat) during the late 1870s but don’t give a specific date. Jones built his prototype in 1878, essentially a canoe with a glass viewing panel in the bottom. Incredibly, Jones’ boat has survived and is on display in the Florida Museum of History in Tallahassee. Some widely reported accounts describe the two as working together. Whatever the details are, it is safe to describe Morrell and Jones as pioneers in the tourism industry.

By the 1890s, glass-bottom rowboats were common at Silver Springs. The tourist season peaked during the winter and one can imagine how amazing it must have been for a visitor to peer into the crystal-clear waters for the first time. By 1909 C. “Ed” Carmichael had purchased the land around the springs and added cushions and canopies to the boats. In 1924, Walter Carl Ray Sr. and W.M. “Shorty” Davidson assumed ownership. The following year they introduced gasoline engines to the boats. By 1932, the iconic wooden glass-bottom boats had electric engines, signaling that the age of modern tourism had arrived at Silver Springs.

The Silver River Museum is located at 1445 Northeast 58th Avenue and is open Saturday-Sunday 10am-4pm. Visit silverrivermuseum.com or call (352) 236-5401 for more information.